Save a horse, play the cowboy. 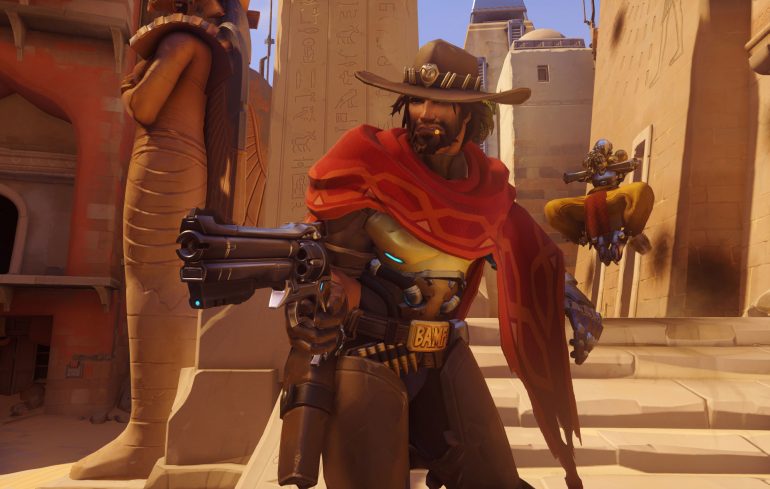 It’s been a rough winter for Overwatch players, but the newest patch on the public test realm (PTR) may offer some relief. The new patch, 1.44.0.1, proposes huge nerfs to the most popular shield heroes, Orisa and Sigma, while offering buffs and balance changes to DPS heroes. All of these changes have been made in an attempt to unseat the current meta, or most popular team composition, that revolves around shield heroes.

For the sake of clarity, the new patch will be referred to as Improved Patch 1.44. The patch is still in testing on the PTR and will likely remain there for a few weeks. None of these changes are set in stone, but we still have some ideas on how they could alter Overwatch’s competitive meta.

Once upon a time, Orisa was only used in niche scenarios, like protecting a Bastion on the payload or setting up a bunker composition. With the rise of role queue and the introduction of Sigma, however, she’s become a must-pick for nearly every competitive match. Even with large-scale nerfs to the heroes over the past two patches, Orisa and Sigma have reigned supreme as the ideal tank choices for high-skill play.

After Improved Patch 1.44, we may see a minor return to those niche tank strategies. Orisa’s primary fire receives a whopping two-point reduction from 11 to nine, greatly reducing how much damage she can do. Fortify is given a 10-second cooldown on top of the 10-percent strength reduction it received in Patch 1.44. Orisa’s most important ability, Halt, which drags in enemies to a central area, has its stun duration nearly halved from one second to 0.65 seconds.

With these changes, Orisa becomes less capable of playing her role in the current tank-heavy meta. Thanks to huge nerfs to Fortify, Orisa can’t stand up to damage the way she used to. Reinhardt, with his Steadfast passive, would theoretically be able to resist damage and knockback better. Orisa will by no means be out of the meta, but she may be more useful in situations that explicitly require her Halt and not her Fortify.

Sigma also gets big changes to his kit in Improved Patch 1.44. The most important is a critical change to his ultimate, Gravitic Flux. The ultimate can now be interrupted before heroes fall and incur damage. Previously, Sigma couldn’t be stunned or eliminated out of his ultimate. Heroes like McCree, Sombra, enemy Sigmas, or snipers now have a chance to save their team from Gravitic Flux. In addition, Sigma’s Accretion now does a third less damage and Gravitic Flux slows heroes for a shorter time.

Sigma is still an important shield hero, especially when paired with Orisa. Because of the change to his ultimate, Sigma players will have to tread carefully when casting Gravitic Flux. This may make other off-tanks more viable when facing heroes with stun potential. Zarya, who received a secondary fire buff a few patches ago, may find her way back into the meta. Reinhardt and Zarya have made a good pair in the past and could see more play time after the PTR patch is live.

The most popular changes in Improved Patch 1.44 are the extensive buffs to Overwatch’s favorite cowboy, McCree. In a set of buffs that seemingly came out of nowhere, McCree’s health has been increased from 200 to 250. While his primary fire has a slightly higher recovery time, any downside is instantly redeemed by a huge overhaul to his ultimate, Deadeye. McCree can now turn at will while using the ultimate, locking onto targets all around him. Previously, McCree players were stunned in place while using Deadeye.

With his increased health, McCree is now able to stand up to more damage from other DPS heroes or tanks. This makes him infinitely more dangerous to heroes like Pharah and Doomfist, who may not be able to eliminate him before he hits a headshot. The Deadeye overhaul allows McCree to theoretically aim his ultimate in a 360-degree circle around himself. The instant headshot could take out a Genji before he pulls Dragonblade or, more importantly, a Sigma before he casts Gravitic Flux.

Hanzo and Reaper get nerfs in Improved Patch 1.44, possibly to reduce their overwhelming pick rate. Hanzo’s projectile speed was reduced in Patch 1.44 and now his Storm Arrow does 60 damage, down from 70. Reaper’s Lifesteal, which gives him back health based on the damage he deals, is reduced to 30 percent from 40 percent. This makes him less able to capitalize on damage to tanks and high-health heroes.

McCree could see an increased pick rate as DPS players get excited about these changes. This is bad news for Pharah and Tracer mains, but it could be good news for players who are tired of facing Hanzo, Reaper, or Mei every single fight.

Much like Orisa and Sigma, Baptiste has been a must-pick in most competitive matches over the past few months. Thanks to a huge rate of burst healing and his Immortality Field, he’s been indispensable against damage dealers like Mei and Hanzo. The new PTR patch reduces his healing grenade power from 60 to 50 and increases the recovery time of his primary fire. Many players have joked that Baptiste is a “secondary DPS” due to his primary fire, so this change makes that gun less oppressive.

Baptiste also saw significant nerfs in Patch 1.44 to his Immortality Field and ultimate, Amplification Matrix. Two patches worth of nerfs still likely aren’t enough to get him completely out of the meta, but like his tank counterparts, he could be relegated to niche scenarios. Ana may be a better choice for her burst healing grenade and ability to keep bulky tanks alive with Nano Boost. Moira may also be a consistently better choice than Baptiste because of her healing output.

Meta changes normally aren’t obvious until professionals or other highly-ranked Overwatch players get accustomed to changes. The Overwatch League begins in two weeks and will reportedly play on live Patch 1.44. Seeing as this update is an addition to Patch 1.44, it will likely see play on the Overwatch League stage.