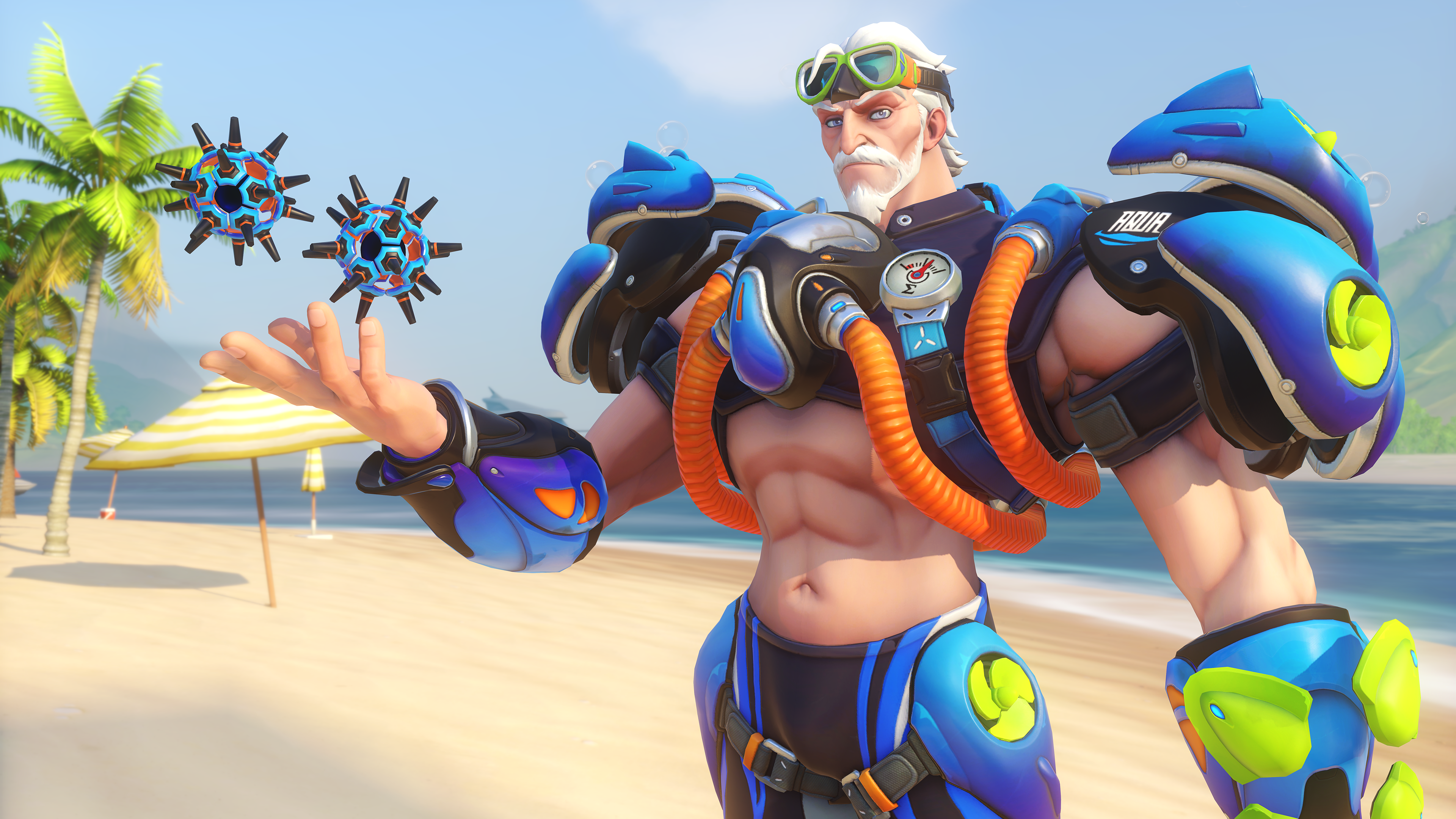 The water is warm, the sun is out, and it’s time to dive into all that gold you’ve been saving in Overwatch. This year’s Summer Games event is now live, running from July 20 to Aug. 10. Players can unlock eight new skins along with dozens of other cosmetic assets.

As usual, this year’s Summer Games skins focus on fun looks that represent the spirit of the season. There are also a lot of swimsuits and a few interesting surprises.

Each Summer Games Epic skin can be unlocked by completing a weekly challenge. Players will have to rack up 27 “points” per week by playing or winning games of Overwatch in arcade mode, quick play, or competitive mode.

Monkeys don’t often traverse the deep seas, but scientists sure do. Land-loving Winston has been turned into a vision straight out of Atlantis in this Epic skin, available from July 20 to 26. His armor is now scaled instead of chrome and he’s sporting a glittering crown that contrasts with his blue skin. Perhaps he’s searching for an underwater peanut butter trove.

Not content with having only one fantastic Summer Games skin in Lifeguard Pharah, Overwatch designers decided that the aerial ace deserved another go-around. Available from July 27 to Aug. 2, Sunset Pharah adorns the DPS hero in what looks like a Hawaiian resort explosion. Pharah rocks a hibiscus flower in her hair, surfboard print over her armor, and straw roof accents on her shoulders.

In the years before Summer Games descended into ocean-themed shenanigans, the focus of the event was the Olympics and other summer sporting events. Heroes would often get skins that represented their heritage and Hanzo finally gets his own, available from Aug. 3 to 10. The white and red Nihon skin represents his home country of Japan and the cherry blossom print adds a nice festive touch.

Legendary skins can be unlocked through Summer Games loot boxes or purchased for 3,000 gold.

The master of the “car wash” gets a new aquatic look for this year’s Summer Games. Symmetra has been transformed into the mermaid we all wanted to be after watching The Little Mermaid a hundred times in a row as a child. She’s rocking a borderline bikini, as is normal for the Summer Games event, but with a mermaid skirt and glowing blue eyes.

One of the game’s newer heroes, Ashe, gets her swimsuit skin in this new Summer Games Legendary. She’s rocking a red bikini with a decorated sarong, pink hair, and a very intimidating water gun. Most fans will be sidetracked by Ashe in a swimsuit, but don’t overlook B.O.B. He has a flamingo float hat straight out of a Jimmy Buffet concert and he’s rocking his own speedo for hot bot summer.

Some professional Overwatch players have referred to Mei as a “demon” in the past, but she’s proving with this skin that she’s really just trying to be sweet. The Sprinkles Mei skin gives her a look straight out of a retro ice cream parlor, complete with a blonde pin curl look and soda fountain worker hat. Her weapon has been turned into an ice cream machine and her loyal friend Snowball is now an adorable sundae.

If you thought you could get away with cheating in Lúcioball, think again. Referee Orisa is here to put a stop to those shenanigans. The safety-focused omnic gets a full referee outfit in this Legendary skin, which includes extremely cool futuristic cleats and a digital belt buckle. If no one else will point out your red flags, Orisa will.

The Overwatch Summer Games event always focuses on the attractiveness of the game’s characters and presents that data straight to fans’ eyes with bathing suits. Sigma, who’s probably not in the top tiers of most people’s Overwatch crush lists, has inexplicably been given a shredded set of abs this year. Not only that, he has a full head of hair, a well-groomed beard, and extremely low-rise swim leggings. We’re not sure who asked for “hot Sigma” this year, but we hope they’re happy somewhere.