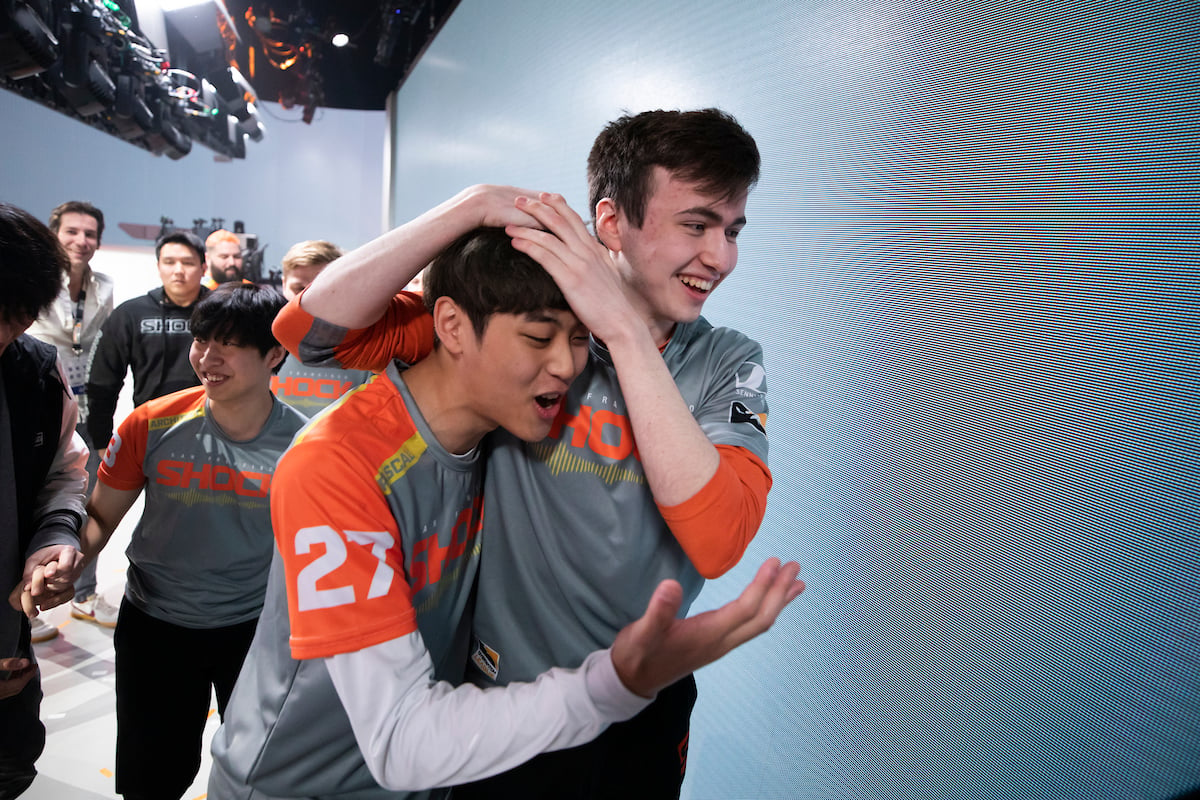 Competing in the Overwatch League Grand Finals is a difficult process for any player. Alongside constant practice and game analysis, players often feel overwhelming pressure to win on behalf of their fans. For some players, their experience this year was made even more challenging thanks to a new obstacle: quarantine.

Most of the 2020 Overwatch League season took place online and teams were divided between two regions, North America and Asia, that never interacted. For the 2020 Grand Finals to combine those regions and crown a single champion, two North American teams—the San Francisco Shock and Philadelphia Fusion—had to travel to South Korea to compete.

Before the 2020 Grand Finals gauntlet begins on Oct. 8, a few members of the San Francisco Shock and Philadelphia Fusion discussed their experience in quarantine and how it affected their mentality going into the games.

For any human being, the idea of staring at the same four white walls for two weeks can be terrifying. Even for the most introverted of people, lack of human contact takes a toll. Players reported feelings of monotony and loneliness in their quarantine experience.

“I showered, ate breakfast. I streamed, I ate lunch. I scrimmed, ate dinner, then just laid in bed for like three hours and fell asleep,” San Francisco Shock main tank Matthew “Super” DeLisi said during a Grand Finals press conference. “And did that for 14 days. That was literally every single day.”

Every quarantined player was still responsible for attending practice games, or “scrims,” while in isolation. Multiple players said this was actually helpful to pass the time. The practice created a routine that was similar to their regular lives.

To survive in quarantine, Philadelphia Fusion off-tank Gael “Poko” Gouzerch leaned on a familiar routine of practice and workouts. “We just kept a clear sleep schedule, tried to call each other,” Poko said of his experience. “[During quarantine] we’re trying to stay in contact. Every day we call each other, see how it goes.”

Poko and his teammate Daniel “FunnyAstro” Hathaway often streamed their “lunches” together, held over video call—a small reminder of the team atmosphere players were missing.

Players had a variety of other complaints about the experience, from uncomfortable chairs and desks to general boredom. San Francisco Shock general manager Chris Chung stayed pragmatic and passed that sentiment on to his players. “There’s really no use complaining and not being able to move on,” he said. “We just talked it over, we said ‘this is how it’s gonna be,’ we just need to adjust to the surroundings.”

One universal complaint among the quarantined players and staff was the quality of the food provided to them. They were given three meals a day at specific times, but as they expressed repeatedly throughout the experience, the deliciousness of those meals wasn’t guaranteed.

“The first few days were a little rough before we got the food package from Blizzard, which was a real lifesaver,” FunnyAstro said, referring to the much-appreciated care package sent by Blizzard to quarantined staff and players. The package included copious amounts of instant noodles, non-perishable snacks, candy, and drinks for everyone to enjoy.

“[The players] gave us feedback like, ‘we’re not getting enough food, we wish we had that,’” said Overwatch League competitions operations lead Adam Mierzejewski, who asked Korean natives on his team to suggest snacks from home that players might enjoy. After collaborating with general managers and team staff, “all of those ideas ended up becoming an oversized care package,” Mierzejewski said.

The biggest hits from the care package included the instant noodles, which were a decent supplement to the underwhelming government-provided meals, and the sweet treats.

“Some of the Korean candy is really good,” FunnyAstro said, referring specifically to ABCs, which are tiny chocolates shaped like keyboard keys. “They should be illegal,” agreed Philadelphia Fusion assistant coach Christopher “ChrisTFer” Graham.

Even with a boost from delicious chocolate, isolation or restlessness can have a negative impact on gameplay and practice. When asked if quarantine affected their play or mentality going into the Grand Finals, however, most players said the experience didn’t change them. Many players attributed their mental health to the consistency of their schedule during and after quarantine. The Shock, for example, kept up a routine nearly identical to that of their practice in Los Angeles.

“I think deferring from stuff like that is how you psych yourself out sometimes. Why change what works?” Super said. Moth, ever the realist, quipped, “other than [a change in scrim times], we used to Uber to the practice facility and now we walk.”

For most of the players and staff, quarantine was a difficult obstacle but not a life-changing one. ChrisTFer admitted that this outcome might not be the case for people who aren’t such dedicated gamers.

“The truth is, really, if you were to find a group of people who were more equipped to spend two weeks in a hotel room doing nothing but playing games… we’re pretty much made for it,” he said with a laugh. “I can imagine almost anyone else on the planet would struggle with the process a little bit more than we did.”

In some cases, the escape from quarantine was its own reward. Shock main tank Super, who’s notoriously extroverted, said the experience of leaving quarantine left him “rejuvenated.”

“For me, getting out of quarantine was actually like a boost up. You don’t get to see anybody, you don’t get to talk to anybody,” he said. “Once you actually get out you’re able to touch people again and look at people. It just feels a lot better.”

Both the Philadelphia Fusion and the San Francisco Shock have spent the last few days practicing together, finally free from quarantine, at facilities in South Korea. The Shock will take on the Seoul Dynasty to kick off the 2020 Grand Finals at 6am CT on Oct. 8. Afterward, the Fusion will face the Shanghai Dragons at 8am CT.