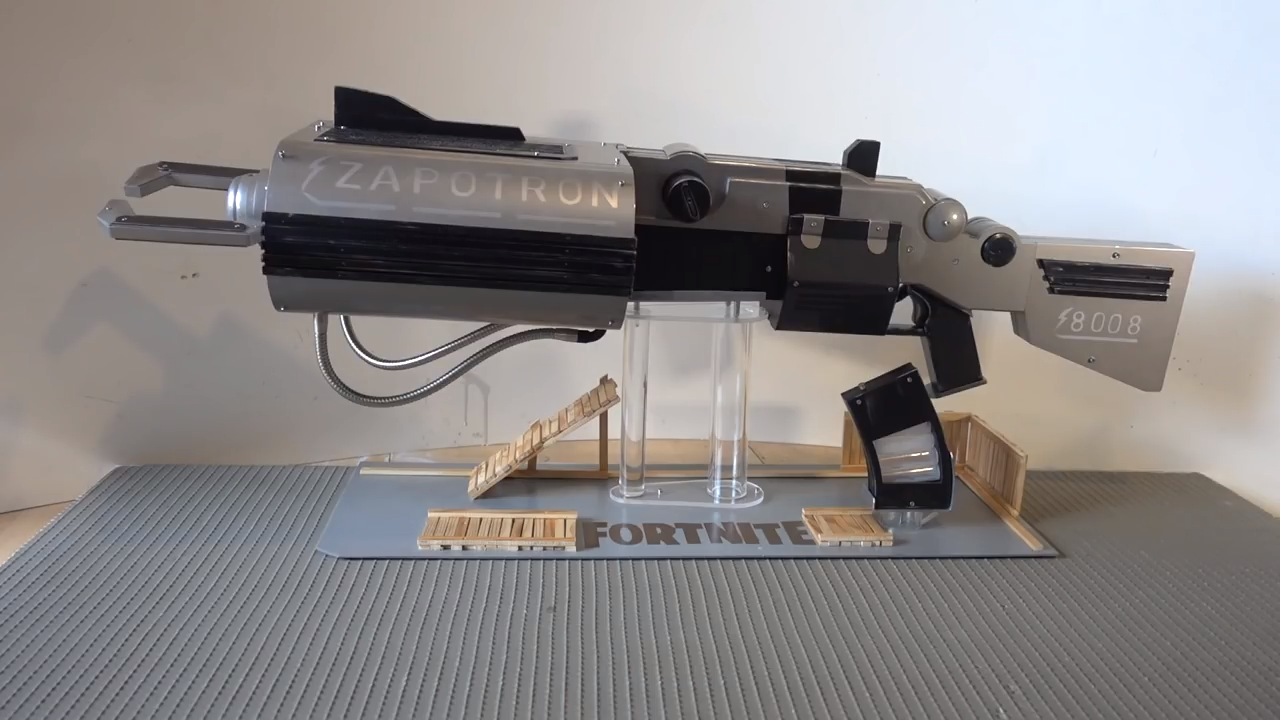 Screengrab via LaserGadgets/YouTube Fair Use

Patrick Priebe, or “patricklaserguy,” is no stranger to putting together laser-powered weapons from the most popular video games. From Halo to Overwatch, he’s built some impressive creations, all of which can be viewed at his LaserGadgets YouTube channel.

His latest project may be the most impressive yet: The Zapotron from Fortnite.

In a video spotlighting the massive contraption, Priebe shows off his hefty sidearm, which not only lights up and spins like in the game, but fires a real frickin’ laser beam. It’s not going to do the same kind of devastating damage as its virtual counterpart, but it can totally screw up some balloons.

The Zapotron singes some trees and strategically-placed wood. The weapon impressively busts through glass balls, leaving them in flames. It’s Priebe’s first Fortnite weapon recreated for the real world.

“Took a while to make it, almost 6 weeks. Full metal. Planning took some time as well,” Priebe said in an email to The OP.

But why start with the Zapotron, the Laser Sniper rifle gun that fires piercing blasts that eat through enemies? It seems like a pretty difficult choice to begin with, not to mention a smooch dangerous.

“I love lasers, and this one is a huge laser sniper,” Priebe said. “It’s also a Legendary rare item, if not super rare, almost a myth.” Good reason.

Priebe is more interested in the heavy-hitter weapons that can dole out more damage, though he’s created his fair share of smaller weapons such as ray guns from Rick and Morty and Mei’s frosty Endothermic Blaster from Overwatch.

“Pistols are nice, but something you have to wield with two hands is always more of a challenge,” he said. “[You have to] put all the details on, every knob, every screw and letter.”

Priebe says his fans can expect more Fortnite firearms down the line.

“Up next is a shotgun actually, a Nerf mod Fortnite shotgun, but I want the people to let me know what they wanna see next!,” Priebe said. “I would also make a melee weapon, sword, or a pistol. Even the minigun would be cool!”

Patrick does do requests and sells some items on his official site. While he doesn’t offer plans or blueprints to anyone who reaches out, he can make custom creations. Just don’t try this at home. Leave this to the professional YouTube weaponsmiths.