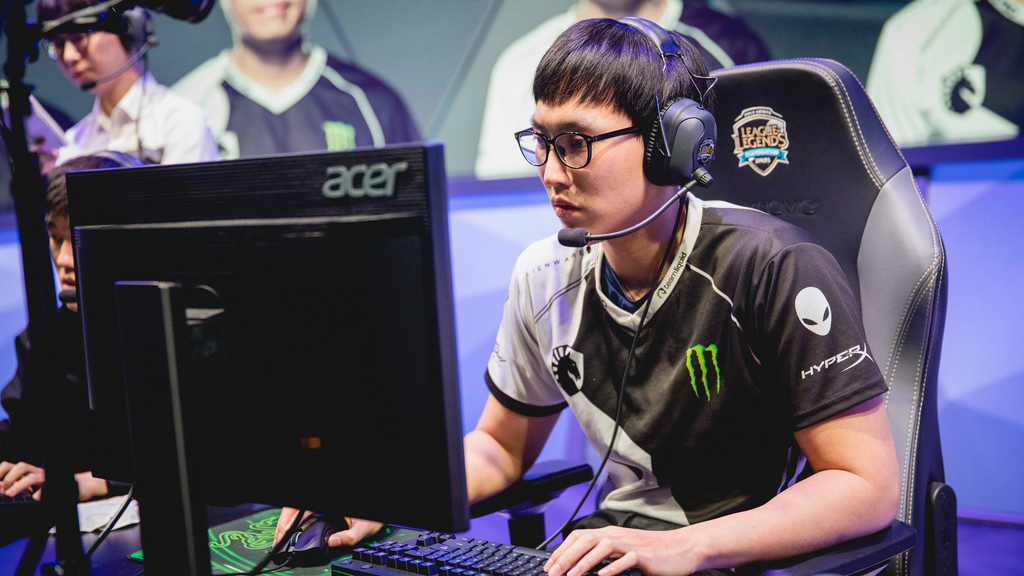 This weekend the League of Legends Championship Series will crown champions in Europe and North America.

There won’t be any fantasy champions, though, because there aren’t any daily fantasy contests during the playoffs. The inconsistency in number of games in best-of-five series and the schedule make it tough to do. But that doesn’t mean we can’t pretend.

Today we’re going to conduct a little thought experiment and construct a fantasy lineup that’d win this weekend, if the weekend was a daily fantasy contest.

We’re using Skrilla scoring and we’ll take salaries based off the last LCS data we have, the final day of week eight.

The first thing to consider when looking at a slate of matches is who you think is going to win them, and which of those wins will produce big fantasy points. Winning teams produce an outsize portion of the kills in each match, and winning teams also score more objectives, which award players points on the Skrilla platform.

On paper, Fnatic is the favorite over G2 Esports, but the 100 Thieves and Team Liquid match is too close to call. So which of those matches will produce the most points?

100 Thieves and Team Liquid are teams at the lower end of the spectrum in terms of fantasy point production. 100 Thieves averages 0.47 combined kills per minute while Team Liquid sits at 0.52 CKPM, both in the lower half of the NA LCS. Fnatic and G2 Esports, though, aren’t much different, sitting at 0.52 and 0.48 CKPM respectively. But Fnatic and G2 Esports produce way more points. The difference? They play more minutes on average. G2 Esports averages 41.4 minutes per game, the highest score in the LCS. Fnatic is third in Europe at 39.9, but that still tops every American side. Team Liquid averages the fastest games in both leagues at 34.1 minutes, meaning they just don’t play long enough games to score lots of point-producing kills and assists.

Of course, you can see these effects in action if you simply look at each players’ average fantasy scores. Fnatic and G2 average much higher than the American teams, and Team Liquid players like Yiliang “Doublelift” Peng are in the bottom half of fantasy scorers despite putting up impressive stat lines on a rate basis. But it’s helpful to understand why that’s happening so you can make informed lineup decisions when the matchups might not go in the highest scoring player’s favor, or they’re too expensive to field.

So with those facts in mind, Fnatic looks like it should be the core of our lineup. They’re the biggest favorite to win their series and their series should produce more fantasy points on average. We can only start three players from Fnatic, though, so we’ll need to find some picks elsewhere, and we’ll start at the top.

Our first pick goes at odds with our series prediction, but it’s justifiable. G2 Esports likely won’t be swept, so Wunder will have plenty of opportunity to rack up big points totals. Plus he has an advantageous matchup against Gabriël “Bwipo” Rau, a rookie who may struggle on the big stage. If G2 Esports wants to win this series, they’ll likely need to do it in the solo lanes, and while Bwipo has played very well since entering the lineup for the injured Paul “sOAZ” Boyer, he’s not Wunder, the most consistent fantasy scorer in the LCS top lane this season. G2 Esports would do well to leverage that advantage and give Wunder a lead.

His jungle foe, Marcin “Jankos” Jankowski, may be the higher scorer and better jungler, but Broxah looks like the favorite to put up more points in this series. Broxah obliterated Team Vitality in the semifinals, posting a playoff-leading 21.0 KDA thus far, and should have opportunity to continue against G2 Esports.

This one is a tough choice because, like in the jungle, G2 Esports is fielding the stronger fantasy scorer and stronger player, this time in Luka “Perkz” Perković. Caps will have his work cut out for him and may struggle in lane, but he’ll make it up later when Fnatic are winning team fights and the series.

Perkz may also be a viable alternative, especially if you think the series will be close or tilt G2 Esports’ way. The American mid lane matchup features Ryu and Pobelter, which isn’t exactly thrilling for the scoresheet.

There’s only one real choice for the ADC slot, and it’s the fantasy god himself. No League of Legends player accumulates big numbers better than Rekkles, the unkillable bot lane dynamo.

Both American bot laners may be competitive picks this week, though. Cody Sun’s team is increasingly relying on him to carry matches and Doublelift has posted actually insane stats so far in the playoffs (39.0 KDA and 44 kills in 7 matches? Is this even real?). But Rekkles puts up huge numbers every single game. His 33.43 PPG tops the next best challenger by nearly 4 points, a huge gap in scoring. Rekkles will don our captain’s hat, boosting his point totals by 25 percent.

We can’t pick another Fnatic player, so Zdravets “Hylissang” Iliev Galabov is out. G2 Esports’ Kim “Wadid” Bae In would be a strong choice—he lead Europe in fantasy scoring at the position. But we’ll go with Zaqueri “aphromoo” Black of 100 Thieves. Wadid has a tough lane matchup against Rekkles, who doesn’t give an inch to foes. Aphromoo just has to deal with Doublelift.

Okay, that won’t be easy, but with 100 Thieves’ bottom lane focus and Aphromoo knowing every trick of his former lane partner he’s a solid choice to fill the final spot in the lineup.

So we end up with a team of Wunder, Broxah, Caps, Rekkles, and Aphromoo. An LCS championship caliber squad if I do say so myself. Our salary clocks in at 95,800, well under the 100,000 limit.

For fantasy, they should produce big numbers this weekend. The biggest risk is, of course, Fnatic losing the series against G2 Esports, especially in a stomp. In that instance, G2 would likely post huge numbers and make our lineup look silly. If they play a close series, though, or even a loss, I’ll take our chances.

It’s also possible the American matchup throws a wrench into things. Doublelift has played like an absolute monster so far in the playoffs. Look at this stat line: A 44/2/34 K/D/A line, good for a 39.0 KDA, and that’s in a total of 7 games played, a significant sample. He leads the league in DPM for the playoffs at 819. It’s likely one of the strongest statistical runs anyone’s had in the playoffs. But it may come to an end this weekend against a tough 100 Thieves side. We’ll have to hope it does, for our fantasy lineup to take this imaginary contest.