Psyonix previously announced that Rocket League’s free-to-play update was going to feature a Fortnite-inspired event called the Llama-Rama. And now, fans have gotten more details about just what will be dropping out of the Battle Bus—or in this case, how to unlock the Battle Bus. It’s the newest car joining the Rocket League lineup when the Llama-Rama begins on Sept. 26.

Players will be tasked with completing in-game events that are a bit unusual for Rocket League’s style. Completing these event challenges will unlock specific event items that you can claim from the challenge menu. If you manage to complete them all, you can unlock the Battle Bus.

Here are the items that will be available once the event starts, though there could be additional content shown once it actually goes live. 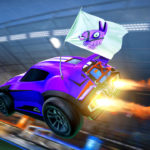 More details about the specific challenges and any extra items will be revealed once the Llama-Rama event begins on Sept. 26.

As for the free-to-play update, it goes live on Sept. 23 with additions like cross-platform progression for the game and a single set of dates for the game’s Competitive Seasons, Competitive Tournaments, and the Rocket Pass.