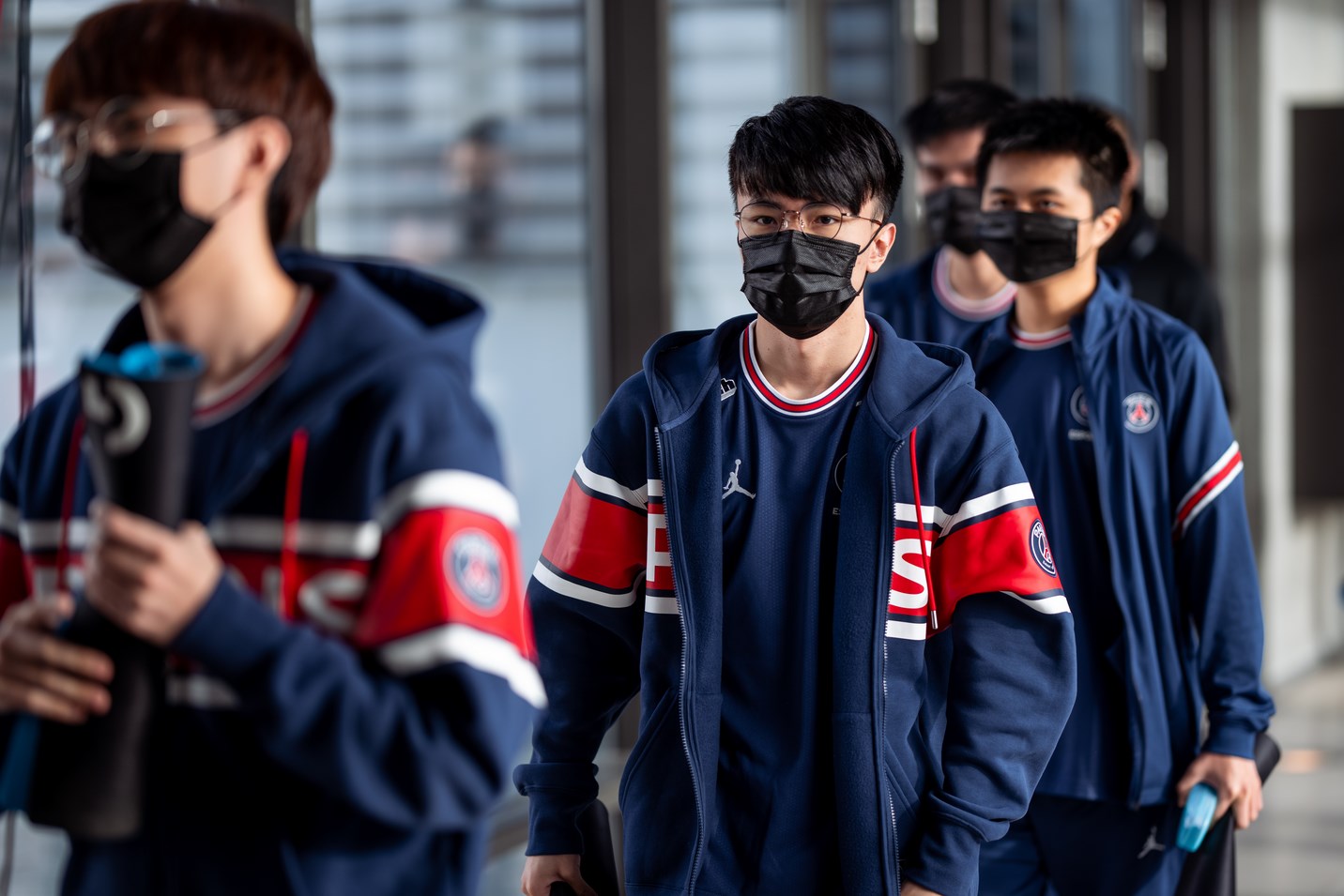 This article is written in partnership with DJ Esports. All odds presented are at the time of publication and are subject to change.

Group C in the 2021 League of Legends World Championship will conclude on Oct. 17.

Of all the matches on the final day of play in this group, the rematch between Royal Never Give Up and PSG Talon stands out. RNG sit in first right now with a 3-0 record, while PSG have only dropped a game to the group leaders. The first time these squads met was just the second game overall at Worlds 2021. This means a lot has changed in how these teams have adapted to the meta and perceive each other.

The first matchup between RNG and PSG featured two standard meta team compositions from this year’s Worlds. A core of Twisted Fate, Jarvan IV, and Miss Fortune was chosen for RNG, while PSG responded with Aphelios, Lee Sin, and Thresh. The second phase began with a Kennen pick for PSG. RNG answered that by picking Rell, then threw a curveball with Syndra top for Xiaohu.

Both teams had many engage and teamfighting tools. But Xiaohu’s Syndra was the key to the game for RNG. Syndra could punish the Kennen incredibly hard in the lane phase. After that, her Scatter the Weak stuns could be used to follow up on Jarvan and Rell’s engages or peel back against Lee Sin and Kennen. This aspect of RNG’s game was incredibly important since Tryndamere mid was chosen for PSG to splitpush and put a threat on RNG’s backline.

While GALA and Ming did find a two-vs-two kill in the bot lane for first blood, the biggest moment of the early game came around the six-minute mark. Xiaohu used his lane control and pressure to successfully absorb a gank attempt from PSG. Enough time was bought for Cryin and Wei to arrive and turn the gank into a two-for-zero in favor of RNG.

The Chinese squad used this lead to take both Rift Heralds and the first dragon. Things should have been smooth sailing from here, but RNG made a crucial mistake that allowed the game to go on for much longer. A hard engage was called at PSG’s bot tier-two tower. RNG weren’t able to follow up and had the fight turned on them. Maple’s Tryndamere earned a quadra kill as a result.

Even with the game being close, RNG still showed that they were the superior squad. After catching out Hanabi’s Kennen in the bot river, RNG were able to rotate in time to catch three more PSG members on their Baron attempt. From there, the favorites regained control of the game. RNG closed it out with a bot lane siege for a 37-minute victory.

This match showed a few key aspects of RNG as a team. First, their draft flexibility is among the best of the teams in the tournament. Xiaohu isn’t a normal top laner. The majority of his career to this point has been spent playing mid. He’s completely comfortable on mages and other ranged carries, as well as more traditional top lane champions. RNG will draft and play to allow Xiaohu as much room to create leads as possible.

But RNG could have an overreliance on their star top laner. In their three games so far at Worlds 2021, Xiaohu has played Syndra, Lucian, and Kennen. All of these champions are ranged lane bullies who can amass large CS and pressure advantages. Xiaohu averages an incredible +36 CS differential at 15 minutes at Worlds, according to gol.gg. Using all that gold, he has the highest damage per minute among top laners and the second-highest KDA.

While this style of play isn’t necessarily bad, it does have its weaknesses. PSG could attempt to force Xiaohu into a bad lane matchup with a final counter pick. If they don’t want to go down that route, they could also target Cryin by forcing him onto champions with a lower baseline value. This would include banning, or even picking away, his favorite Twisted Fate. By making it harder for RNG to play for their tried-and-true method of winning, teams could start to expose them.

From good to exceptional

As for PSG, they have many positives going for them through their first three games of Worlds 2021. PSG haven’t shown overreliance on any one player or champion. Of 15 possible picks, PSG have played 14 unique champions. Additionally, no one player has stood out as a major weak point. All five PSG members have a KDA of 3.5 to 6.17, placing them all in between 19th and 39th best overall out of 81 total players at Worlds.

PSG also have shown the ability to win games through multiple players. Their important victory against Hanwha Life Esports came using an expertly piloted assassin and dive composition. Maple’s LeBlanc was the focal point of this strategy. Against Fnatic, Hanabi’s late-game Gangplank dealt 30.7 percent of his team’s damage to help bring in that win. Overall, PSG are an extremely well-rounded team.

Despite the benefits of being a well-rounded squad, there are some caveats to keep in mind. PSG doesn’t have a true superstar lining their roster. There’s no Xiaohu or other hyper-carry type player who they can look toward for consistent advantages and win conditions. There’s a reason why RNG’s odds appear so high at 1.336 to 3.316: We’ve seen how they can consistently win games.

PSG’s floor is very high, allowing them to beat the other two teams in their group. But their ceiling is limited. Without a player being that consistent threat that can be invested in, it will be hard for PSG to clear the final hurdle that allows them to take down tournament favorites. It’s likely that PSG will end up advancing from Group C as at least the second seed. If they want to contest for the coveted first place finish and in the knockout stage beyond, though, someone needs to step up and be able to take over the game.

The rematch between PSG and RNG will take place on Oct. 17 at 8am CT.

Do you have your own thoughts on who you think will be victorious? Head over to DJ Esports to place your own predictions for free using DJT and have a shot of winning part of the $10 million USDT prize pool that the platform is giving away. There are over 70 different options you can try to predict, from the first turret to first blood. Put your League knowledge to the test and get a part of that prize pool.

Are you curious to learn more about DJ Esports and how it works? We’ve got it all covered in our educational piece.