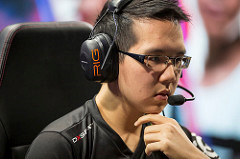 Note: For item and dragon timers I used decimal places for the seconds value instead of the standardized colon for timers. Example, instead of 34:50 you would see 34.50 instead. So when you see sightstone saying 10.36 this actually means 10:21 for the timing.

Jungle Item: When I talk about jungle item I am talking about the final completion of the jungle item, NOT the original upgrade from machete to a new desired smite.

Evolution of Support and Jungler Item Timings from Groups to Quarters

The first player we will start with is Yellowstar. When looking at Yellowstar’s evolution and priority from groups to quarters we notice that all of his item timings increased from groups to quarterfinals. The consequences of his sightstone being delayed is his total ward output decreased. The main reason his sightstone timings increased was due to the level of competition. EDG are a strong opponent. Even though FNC did end up sweeping EDG, FNC couldn’t grab early game leads like they could in group stages.

For Reignover his jungle item had to be delayed except for his sightstone. Reignover started prioritizing his sightstone far quicker compared to group stage and even compared to his overall average. In game one and game three against EDG Reignover bought his sightstone before the six minute mark. This is similar to what Kez, jungler for Complexity and TDK, used to do where he rushed sightstone before his jungle item. He also would at times buy it while still having a machete which Reignover also did. The idea behind this is to add additional safety for your laners while also being able to get deep vision down if your lanes are creating high pressure. Reducing Clearlove’s effectiveness was important, but the draw back is not being able to match the enemy jungler’s presence in fights.

Now since Reignover was buying a sightstone so early and Yellowstart had to delay his sightstone the total ward difference between the two became 2.33. In other words, Reignover was almost matching Yellowstar’s warding output in the quarterfinals.

When looking at Gorilla’s timings he decided to delay his boots purchase so he could buy sightstone earlier. Piccaboo is one of the best roaming supports and he will make game changing plays if given the chance. Combine Piccaboo with Score and it can be a handful. The best way to control it is to ward earlier and more frequently. This is why we see the big increase in total wards by Gorilla.

Hojin didn’t prioritize early wards as much as Reignover did, but Hojin almost replicated the same amount of total wards per a game. Since both Gorilla and Hojin increased their ward output their ward difference increased to 14 for quarterfinals.  Based on this data Gorilla and Hojin are improving their vision control while not having the same gold in hand compared to their FNC counterparts. However, the main problem with Hojin is he is still completing his jungle item later than Reignover. It is important to punish a jungler if he is rushing sightstone like Reignover. You can’t punish the jungler as hard though if your jungler is getting their jungle item later. Hojin isn’t also exactly the type of jungler to punish this, but we will see if Reignover continues his trend to get a quick sightstone in the semifinals.

Quick note, overall means I have combined the groups and quarterfinals data for each player.

Looking at the difference between Yellowstar and Gorilla we notice both players prioritize boots before their sightstone typically. This means they are looking to roam around the map more often. Their upgraded boots always come last which is typical for supports at worlds. Regular boots is enough to help them out for roaming with the occasional early mobility boots. Now, the interesting thing to note is how Yellowstar is getting his sightstone roughly two minutes before Gorilla and yet Gorilla still matches Yellowstar’s total wards. The first thing that will pop in people’s heads is Koo’s average game time must be longer. Koo’s average game time is 33:15 while FNC’s is 34:38. Koo’s games finish a little bit quicker than FNC’s games. This could mean two things. One, Gorilla is buying more stealth wards compared to Yellowstar to maintain his level of warding before sightstone. The second is Gorilla is recalling back to base more often after buying his sightstone so he can continuously replenish his ward count. Returning back to base more often would also give more opportunities for surprise roams since it’s difficult to determine where a support will head after basing early on.

When comparing Reignover to Hojin we find that Reignover is consistently buying both his sightstone and jungle item before Hojin. The sightstone timing for Reignover is a massive five minutes before Hojin’s average sightstone, but the total wards average differential isn’t as big. You would think having a sightstone for an additional five minutes would result in more wards placed. However, the timing when Reignover is buying his sightstone is around his 2nd recall. The time he spends away from base increases, which results in him not refreshing his sightstone to place more wards down. The full jungle item completion timing is also quicker compared to Hojin. The main explanation here is contribution Reignover has for FNC’s first bloods. FNC has taken first blood in every game where Reignover participates in 89% of them. Meanwhile Koo Tigers have taken first blood for only 40% of their games and Hojin only participated in 20% of these first bloods. Reignover is gaining more gold early on so he can afford sightstone and his jungle item more quickly. The faster both these items are bought the higher impact a jungler can have by both controlling vision and having greater combat stats for early skirmishes.

Let’s look at the Koo Tigers first. In the group stage they held strong leads at 15 minutes, 25 minutes, and by the end of each game. However, they stumbled at the 35 minute mark thanks to the Flash Wolves. When we transition to their quarterfinal games against KT their values took a drop at the 15 and 25 minute marks showing they couldn’t be as dominant against a more worthy foe, but they improved their 35 minute gold difference. It is essentially taking one step forward and then one step back. The real interest will be focused on how Koo Tigers turn around their gold differences from each time interval. Their push through the early mid game got worse compared to groups based on the gold switch from 15 to 25 minutes. They however turned it around going from the mid game to early late game. Finally, their push to the end of the game got worse. KT Rolster is a harder opponent who has a great number of comebacks. Closing out against them took more resources and trades for Koo.

FNC group stage values were just as impressive as Koo’s, if not more so. FNC held a lead in each time frame specified in my data. They were a bit weaker compared to Koo Tigers at the 15 minute mark for group stages, but their 25, 35, and end gold differences were much better. When FNC came rolling into the quarterfinals against EDG they followed suite to Koo Tiger’s trends. Their early game and early mid game dominance dropped down, but their performance in the later parts of the game improved. Koo Tigers may not bring the same early aggression as EDG. Hojin is no Clearlove, but FNC will still need to be wary in making mistakes since giving Smeb or Pray a chance to utilize a lead may prove fatal. Their gold switch values from 15 to 25 minutes decreased slightly, but not significant enough to warrant concern. The rest of their values showed increase, especially from the 25 to 35 minute mark. FNC’s push to the late game is impressive to turn around the gold that much. It basically says FNC effectively snowballs their mid game leads into the late game and cause a significant problem for the opposing team.

When I compare the overall gold differences FNC comes out on top in every category. FNC did perform strongly against EDG which helps influence their values more, but they also performed better in the group stages. Koo Tigers will want to be careful early on since if FNC starts snowballing they may not be able to get back into the game. FNC also have strong shot calling still for the mid game where Koo usually tries to make up some of their ground based on their quarterfinals data. The 35 minute gold difference for Koo Tiger’s overall data is a bit low due to the Flash Wolves games influencing it as I mentioned previously.

Comparing the gold switch values we notice FNC turning their early game advantages to an even higher value compared to Koo Tigers while Koo Tigers give away more gold from 25 to the 35 minute mark. However, FNC doesn’t win in every category. In the end Koo increase their lead from their last value more so than FNC. What this means is FNC wants to avoid giving Koo a chance in the later portions of the game or else they will utilize it more effectively to close out the game compared to FNC.

Credits towards Tim Sevenhuysen who gave me the information on Hojin’s and Reignover’s first blood contribution. Lolesports for the VODS and Riot games for the pictures.