Artifact tokens have the potential to play a major role in the Magic: The Gathering Standard meta thanks to Food tokens found in the upcoming release of Throne of Eldraine.

Treasure Artifact tokens have influenced the Standard metagame for the last two years. With the release of the Throne of Eldraine (ELD) set on Oct. 4 comes Standard rotation, where only two of the 28 Magic cards that use Treasure tokens will survive (Smothering Tide and Rapacious Dragon).

How do Food tokens work?

On the most basic level, a Food token is an Artifact. In this aspect, it’s identical to Treasure tokens. Food tokens provide mana of any color (Gilded Goose), provide lifegain, trigger abilities, or take life away from an opponent.

There are several ways in which Food tokens are created. The most common is when a creature enters the battlefield, but there are alternative ways as well. Oko, Thief of Crowns creates a Food token with his plus-two loyalty counter while Bartered Cow produces one when it dies or is discarded. Even sacrificing a creature (Witch’s Oven) can summon multiple Food tokens.

Once an Artifact Food token is on the battlefield, it can be sacrificed as an “Artifact,” triggering an ability from a spell or creature or two mana can be paid with the sacrifice of Food and you gain three life. In the case of Tempting Witch, it can also be used to take life away from an opponent.

In a reference to the folklore story of Sweeney Todd, Black reveals itself as a Food token producer through Baked into a Pie. Despite the Black Instant being a tad “on the nose,” it’s not the predominant color that uses Food—Green is.

Prior to the ELD spoilers being fully released, there are 11 Green spells that either produce or use Food. Black follows closely behind with seven.

Since Green and Black predominantly favor Food, using the Artifact token in a Golgari build makes sense. But don’t count out Oko, Thief of Crowns. Using Oko in a Simic or Bant build has its benefits. There are also options available in Sultai, Selesnya, and Mono-Green.

Gilded Goose will have an impact in Standard across multiple archetypes. It creates a Food token when it enters the battlefield. Then, at the cost of tapping Gilded Goose and sacrificing a Food token, it produces one mana of any color. It’s the most similar to Treasure tokens and it can generate more Food.

Thanks to the Goose producing mana of any color, it shouldn’t be hard to drop Oko, Thief of Crowns on turn two. Once in play, he’s a Food token engine. And if you have a one or two-drop that needs some beefing up, Oko can change them into a 3/3.

Gilded Goose can also be used to bring Wicked Wolf onto the battlefield by turn three (using an Oko Food token). It’ll attack a target creature you don’t control and then you have the option of using the last Food token to make it a 4/4.

Doing so will tap it, but if it already took out a threat, this shouldn’t be an issue. On turn four, sacrifice another food from Oko and make Wicked Wolf a 5/5. This will tap it again. But in conjunction with Kiora Behemoth Beckoner, her “minus one loyalty counter” will untap Wicked Wolf for up to six more turns (as long as she doesn’t take damage).

To keep Wicked Wolf indestructible on your opponent’s turn, use Gilded Goose to produce extra Food tokens. Then, throw in Hydroid Krasis with an Insatiable Appetite as a finisher and it’s “good game,” as long as Wicked Wolf and Kiora work together for a turn or two.

Every Food card in ELD

Using the Food mechanic in Standard 2020 will have its advantages. To give players a head start in creating decks with Food tokens, here’s a visual guide with every ELD creature and spell that either produces or uses Food tokens. 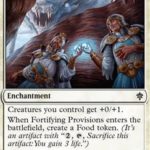 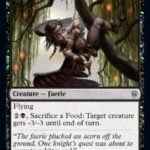 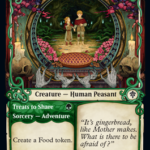 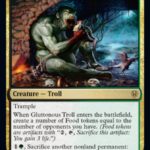