I am continuing my competitiveanalysis of the new Whispers of the Old Gods expansion.  TodayI will be looking at the Warrior class’s C’Thun related minion-Ancient Shieldbearer.  In this article I will discuss thestats and effects of the card and determine whether or not it willbe played. 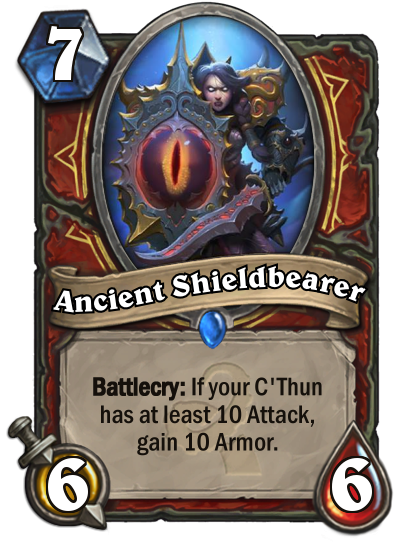 Let’s first break down AncientShieldbearer’s raw stats.  A 7 mana cost minion with 6/6attack and health seems decent.  Amongst currently released 7cost minions it hits the average stat line (7/7 obviously being thebest).  This card doesn’t seem like it would pressure theboard all that much, but it could still serve as an inconvenience. Ancient Shieldbearer will either be dealt with swiftly, orforce the opponent to poorly trade with his/her minions.  Whatreally makes this card viable is its battlecry effect.  Theplayer gains an incredible 10 armor, and armor is already excellenton a Warrior.  It allows you to survive longer, make a hugeswing with Shield Slam, and trade with weapons without losinghealth.

The downside of the battlecry is it’ssituational since the player’s C’Thun must be at 10 attack orhigher.  Warriors might be forced to play the card without theeffect to contest the board.  However, I think players will beable to gain the 10 armor most of the time they play AncientShieldbearer.  This card will typically be played later on inthe game.  That should give a player plenty of time to play2-3 cultists and buff C’Thun to 10 attack.  Also in the pastWarriors never had trouble with contesting the board using Execute,Fiery War Axe, Brawl, etc.  With Death’s Bite leaving Standardthis may become an issue and might force deck building to achieve ahealthy balance of removal, card draw, and C’Thun relatedminions.

Finally, let’s look at cards that workwell alongside Ancient Shieldbearer.  I already explored thearmor aspect and its synergistic properties with Shield Slam andweapons.  In addition, I think Brann Bronzebeard would make agreat fit in C’Thun Warrior decks.  On turn 5, you can playBrann and Beckoner of Evil to ensure you can get 10 armor when youplay Ancient Shieldbearer.  On turn 10 or later if you alreadygot C’Thun to 10 or more attack, you can play Brann and AncientShieldbearer andgain 20 armor. That play could immediately shift the state of the game infavor of the Warrior.  I think these combos are worth playtesting.

All in all, I give this card twothumbs up.  Even if Warrior C’Thun decks do not seecompetitive play, I believe Ancient Shieldbearer is the rightdirection for decks of this nature.  Two copies of this cardwill be an automatic include in Warrior C’Thun.  Survivabilitycards like Shieldmaiden and Antique Healbot are leaving Standardplay and Ancient Shieldbearer will make a great replacement.

About the Author- I am a writer thatfollows competitive esports such as Hearthstone, League of Legends,and Super Smash Bros. Melee.  Follow me @Kenny_Humiston onTwitter for content updates.