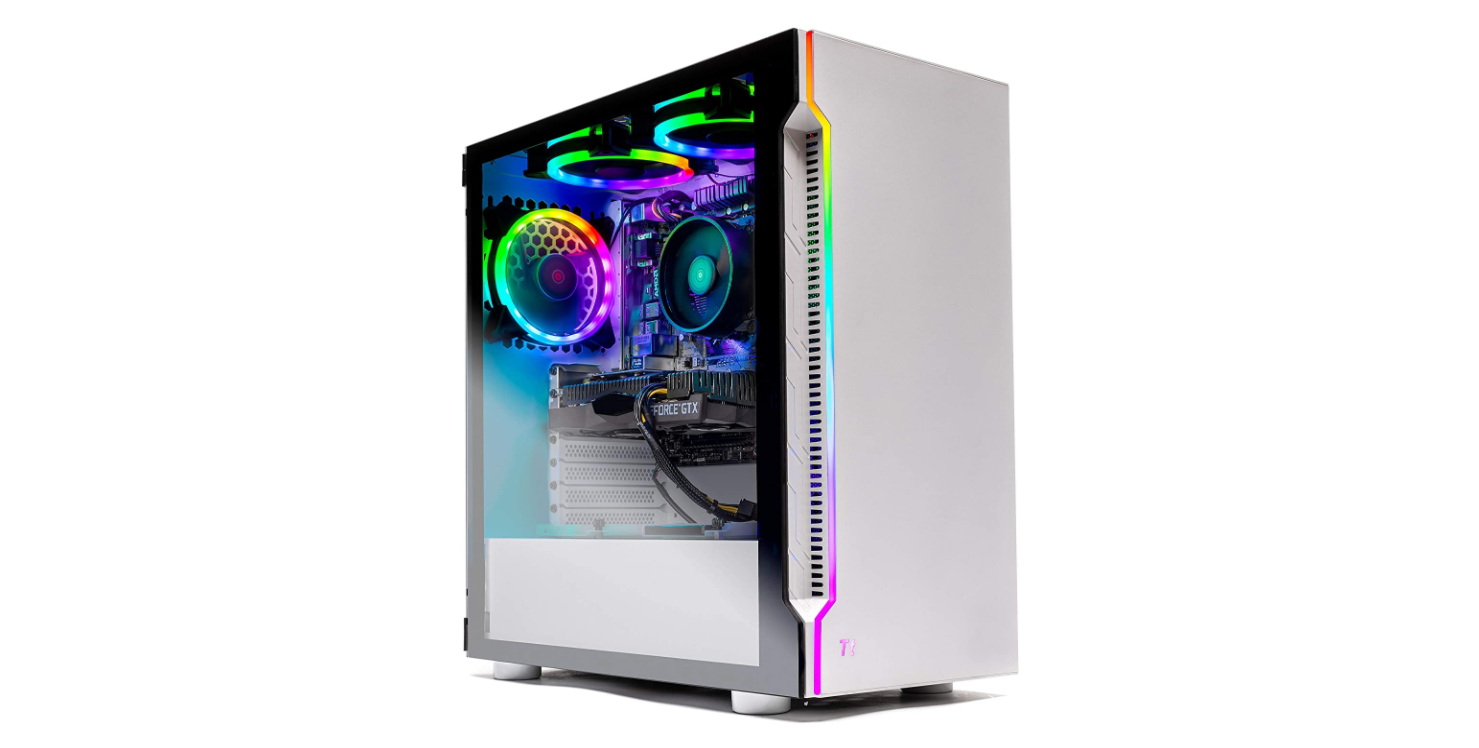 Image by Skytech via Amazon

Although many gamers build their PCs from scratch, not everyone has the time or expertise to pull it off. Thanks to prebuilt gaming PCs, it’s possible to purchase a gaming rig that suits your needs for $1,200 or less.

When choosing a gaming PC, there are a few major components to consider. You need to know what kind of processor fits your needs. This will give you a clear indication of what kind of speed and general performance you can expect. RAM capacity is another important detail since having sizable RAM helps maintain your frame rate and performance. PCs with large storage drives make it possible to save many games, documents, and software.

It’s important not to overlook the graphics card (GPU) when purchasing a prebuilt gaming PC. Many games now only require an entry-level graphics card like the Nvidia GTX 1050 or GTX 1050 Ti to enjoy them at low settings. The most commonly used GPU in the $1,200 price range is the Nvidia GTX 1660, which is incapable of ray tracing.

After considering a PC’s major components, it’s always a good idea to see if there are any additional bells and whistles.

Here are the best prebuilt gaming PCs under $1,200.

The Legion Tower 5 from Lenovo is worth considering if you’re looking for a prebuilt PC that is a beast at gaming and multitasking with a healthy amount of storage.

Lenovo’s Legion Tower 5 runs 1080p games like a champ, thanks to the combination of the Ryzen 7-3700X, Nvidia GTX 1660 Super, and 16GB of RAM. Although the Legion Tower 5 runs many games at 1080p, you can try pushing some games at 4K resolution at the cost of frames. Hitman 3 runs at 32fps, Star Wars Squadrons at 64fps, and Call of Duty: Modern Warfare at 32.4fps. The AMD Ryzen 7-3700X CPU features eight cores and 16 threads for a performance that beats out the Intel CPUs on this list.

This Legion case has a mesh design on the front and top panel for ample airflow. The case design also allows you to easily upgrade the PC with additional hard drives and PCIe cards, and you should be able to load two GPUs in SLI.

When it comes to mid towers, they provide plenty of upgrade room for components like SSDs, HDDs, and graphics cards. The Skytech Archangel is a desktop capable of pushing more than 60fps in most games. Powered by the Nvidia GTX 1660, this PC allows for stable 1080p gaming performance.

Skytech loads its PC with 8GB RAM, a 500GB SSD, and a Ryzen 5 3600 processor. The included RAM is the minimum requirement for most games. Unlike other options on the list, the SSD is a bit small if you plan to play many recent games that surpass 100GB with all modes downloaded. The AMD Ryzen 5 3600 is clocked at 3.6GHz and has more than enough processing power to handle most games and productivity tasks.

This PC has a sleek-looking case and a tempered glass window with three remote-controlled RGB fans. Its sturdy metallic chassis gives it a minimalist look to fit in any setup style.

Dell’s G5 gaming desktop boasts a compact form factor and slightly higher performance than the Skytech Archangel, thanks to the 10th generation Intel i5 CPU and Nvidia GTX 1660 Super. Intel’s processor has a five percent higher benchmark performance than the Archangel’s Ryzen 5 3600, and you’ll be able to reach more than 60fps in 1080p at medium or high settings. The Nvidia GTX 1660 Super also leads the GTX 1660 with 15 percent higher frames in most games.

Buyers also get more than double the storage of the Skytech model. The expanded storage space in the Dell G5 means you can install most of your favorite games without worry. The case has three bays to add additional hard drives. Additional drive bays include one 3.5-inch bay, two 2.5-inch bays, and an M.2 slot for more SSD storage. This PC has 8GB of RAM, allowing you to run most games at their minimum required specifications.

Some other major advantages of the G5 Gaming desktop are its compact form, solid build, and its reliability. The compact design takes up minimal space, making it easier to move the G5 around your setup or haul to LAN parties.

The CyberpowerPC Gamer Xtreme VR PC presents a modestly specced PC with a few bonuses for those looking for the best value. The CyberpowerPC Gamer Xtreme VR PC comes with 8GB of RAM, which is the minimum RAM required for most games. Equipped with a 10th generation Intel Core i5 processor and the Nvidia GTX 1660 Super 6GB, it has the minimum specs to get started with most games at 1080p.

This PC uses the Cooler Master MASTERBOX NR600P case, also known as the jack of all trades, because of its motherboard compatibility, various expansion slots, and versatile cooling features. It comes with a mesh design on the front and top panel to provide better airflow. It’s also equipped with dust filters on top, front, and bottom to filter out dust and ensure the hardware’s longevity. The case has a tempered glass side panel and RGB lighting inside the chassis and on the front panel. Buyers can switch between the seven RGB color presets to fit their setup.

CyberpowerPC bundles the Gamer Xtreme VR PC with a gaming mouse and keyboard, making it one of the best deals for a gaming PC under $1,200.

When looking for a high-performance PC on a tight budget, the 2021 HP Pavilion Gaming Desktop is a decent option. A major difference between this model and the others on the list is the 2021 HP Pavilion’s use of the Nvidia GTX 1650. Although it has less power than the GTX 1660, it’s paired with the AMD Ryzen 5 3500 to give you enough power for 1080p gaming on high settings. The Ryzen 5 3500 has six cores and is clocked at 3.6GHz with a 4.1GHz maximum Boost Clock speed.

The storage on this PC won’t allow you to install many games at once, but you’ll get acceptable performance and load time, thanks to the 256GB SSD.

Additionally, the 2021 HP Pavilion Gaming Desktop Computer has a modern angular case design with all the usual IO ports in the front and a down-facing green LED light. This HP model uses a compact case optimized for future upgrades, meaning the case can handle an additional PCIe card and multiple hard drives (HDDs). You might be able to insert another GPU for SLI, but there’s no guarantee it’ll work because of the limited space.