Theros: Beyond Death’s best and worst White commons and uncommons for Limited 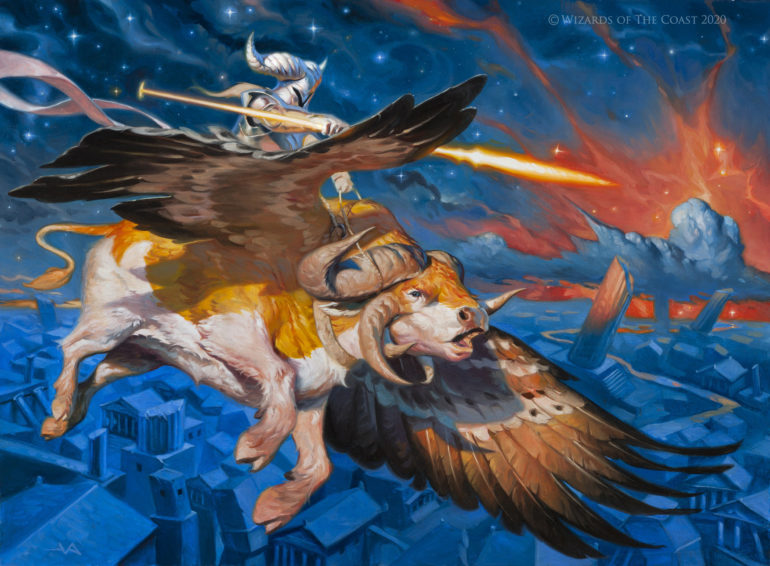 Theros: Beyond Death (THB) is just around the corner, but before you hit that draft table, it’s time to brush up on the top commons and uncommons that will lead you to victory. Here’s the best (and worst) White cards for Limited.

Banishing Light is back and remains one of the best Limited plays around. This flexible enchantment is solid removal for almost anything else on the battlefield. As a bonus, this sticks around to raise your White devotion, and triggers Constellation too if that’s your jam.

Slightly less flexible than Banishing Light, Revoke Existence instead serves as more permanent and focused removal. However, the cost is well worth it, as there will be no shortage of enchantments around to exile out of existence. This card even bops those pesky, indestructible Gods of Theros, all for just two mana.

It’s hard to imagine a better positioned card in White Limited than Daybreak Chimera. It is a solid body with wings, and with enough devotion it can cost just two mana. This will be a reliable beater at any point in the game that you can cast it, and anybody playing against a White deck should come prepared to face this three-headed air force.

Dreadful Apathy does a great Pacifism impersonation, with a tasty bonus to exile its attached creature later on. Like Banishing Light, this will be useful removal for any White planeswalker. Unlike B-Light, this can be removed by protection spells, so take care not to let your opponent get their creature back.

Hero of the Pride

Hero of the Pride is a great enabler for the Red-White Go Wide archetype. This kitty boosts all your creatures every time you target it with a spell. Pair him with other white pump spells like Phalanx Tactics to really get your beatdown on.

As a 4/4 flier for six mana, Archon of Falling Stars isn’t spectacular. Its death trigger is very powerful, though, especially with enchantment creatures running about. Archon pairs well with most White archetypes, but particularly shines in WB Reanimator, where it can reanimate powerful enchantment creatures like Enemy of Enlightenment.

Alseid of Life’s Bounty is a flexible creature that will play a lot of roles within any White deck. It can gain life, trigger Constellation, and counts towards Devotion. Most importantly, it will protect your best creature (only, unlike Dauntless Bodyguard, you can cast it at any time to use it).

Four turns is a lot, but this enchantment is definitely subpar compared to the enchantment removal featured above. I can’t help but feel this needed to add a mana requirement to activate its task counter removal ability. Oh well, at least this is a cool part of the set’s storyline.

Flickering a creature has many uses in Magic, but it’s a lot to ask in Limited. There will be cards that this plays well with, like Reverent Hoplite, but most of the time this will be a dead card in your hand.

Rumbling Sentry is a decent blocker, but ultimately this is not the kind of creature you want in your deck. It does not advance any of the White archetypes’ game plans, and instead just clogs up the board and eats up one of your turns. The scry is nice, but come on. You can do better.