Final Fantasy XIV is one of the most popular MMO games, even though it was introduced over 10 years ago. And with the highest registered player count in 2021, as well as the latest Endwalker expansion releasing soon, it’s far from going away.

Since the game released so many years ago and includes several expansions, there are countless merchandise options to choose from. Final Fantasy has always been a haven for gift seekers due to its vast universe, and FFXIV is no exception. If you’re unsure about what to offer one of your friends who happens to be a FFXIV player, here are some ideas for all sorts of budget categories and interests. 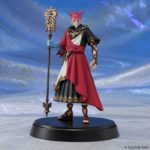 One of the most classic goodies for gamers is figures. Square Enix has a bunch of them in its official store for all price ranges and qualities. The figures represent some of the most iconic characters of FFXIV, such as G’raha Tia and Y’shtola. But if you want to guarantee a good quality, the price will quickly rise. The most expensive figure, Dollfire Dream Y’shtola, costs the hefty price of $980. Those characters are all iconic in the game, so it’s not a risky gift choice.

The brand Taito also offers multiple officially licensed figures made in Japan, such as an Otter lamp figure, Y’shtola’s, and numerous others. The products are delivered globally by second-hand sellers.

Although they might look a bit generic, job magnets and pins are likely to be very popular since they will be introduced for the first time on the official game’s store in December, just in time for Christmas. For this reason, there’s a good chance your FFXIV fan friends won’t already have this item before you gift it to them.

One question remains, though: which magnets to buy? If you’re unsure which classes your friends prefer, try to think by category—tank, healing, melee DPS or ranged DPS—and offer some, or all, magnets of their preferred category. And if you have really no idea what your friend likes to play, you can’t go wrong by ordering Sage and Reaper’s pins, the two upcoming classes with the Endwalker expansion. Be careful, though: some of those items are already listed as “waiting list,” meaning the first batch is out of stock.

If you want to be sure of getting them in time for the holiday, you might want to check the order date with Square Enix or buy those that can still be preordered. European fans can’t buy the magnets at the moment, because the items aren’t available on the region’s store. 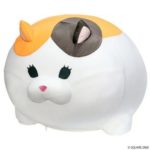 Square Enix is famous for its countless cute mascots. Moogles, Namazu, and other cute species made their return to the MMO game, on top of countless cute options as minions, mounts, and other things. It opens opportunities for the cutest plushes to buy and give as gifts. The official store features the famous Fat Cat cushion, which is very popular but also costly, and multiple Moogle plushes. Countless others are also sold by Taito, the Japanese brand that sells officially licensed goodies, including a Cactuar, Chocobo, Mame Shiba minion, and many more.

There’s a good chance your friends who like FFXIV enjoy eating well-cooked meals, and this FFXIV-themed cookbook offers plenty recipes to do so while connecting to the universe of Eorzea. It features recipes present in the game and others represent characters, inspired by different regions such as Japanese and American meals, with a twist.

It also released at the end of November, so it’ll be a new official item for the community by the holiday season. The writer, Victoria Rosenthal, recreates dozens of game recipes in real life and released other game-themed books. There are also plenty of other official books, such as art books and encyclopedias of Eorzea. It can be a unique and thoughtful gift that will also have a chance to be actually useful.

Square Enix sells many books and music items based on the game, too. If your friends have entire libraries in their house or collect music items such as vinyls, there are many options in those categories, too. Although there are many interesting books in the official store, they will only release between February and April 2022, so you won’t be able to offer them in time for the holiday season, although you can save those options for the next year.

On the music side, however, you can purchase the upcoming Endwalker‘s expansion soundtrack vinyl. It can be a thoughtful gift for vinyl-owners and collectors alike, since the cover is outstanding. It also comes at the reasonable price of $27.99. 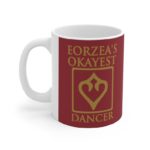 Square Enix’s official store doesn’t feature FFXIV mugs, but countless unofficial ones can be found all over the internet, such as websites Etsy, whether you’re looking for class-themed mugs, funny ones, or others with cute drawings. Yes, there’s chances you friend already owns multiple mugs, but they are always useful as others will break, and it can be a memorable gift.

This is not the most original gift ever, but a game-time card is the safest gift possible to give to an FFXIV fan. It works even if the player already has a subscription, and whatever expansions they’ve bought or not. The player will only have to enter the code on the Mog Station to be offered two months of playtime. If they already have a subscription, they won’t have to pay for the next two months, and the subscription will then resume in the same manner as before. The game-time card is also the best option for a digital FFXIV gift, since the shop doesn’t offer a gift card feature.