Lost Ark offers a large variety of content to discover, and exploration is a significant part of it. Players can hop onto their ship and navigate the seas to discover their islands and earn their rewards.

The Adventure Isles are the hardest ones to clear because they don’t appear often. For this reason, players should organize and activate notifications for the isle before hopping it and clear their content.

In addition to the Monte Island Token, you can get engraving recipes and crew applications by trading the currency of this island. Here is how to get it.

Fastest way to get the Monte Island Token

First of all, be careful not to miss the island spawn time. To do this, head to your calendar on the top bar of your screen and look for the Monte Island next spawn time in the Adventure Island tab. Click on the “plus” button to get a notification 15 minutes before it appears. You can change the time of the notification if needed. 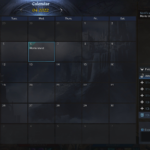 Getting the Island Token won’t be hard, but it might take you some time if luck isn’t on your side. The Token is a random loot from a chest you can get by completing the island’s cooperative quest.

The quest requires players to open chests. It will start a couple minutes following the spawning of the island, so you’ll have time to find a spot and get some Mokoko seeds before starting it.

You can press G to open the chests, or use a spatula by pressing F5 to kick the moving chests that will grant bonus points. Getting a good ranking will offer you more rewards, but even if you only earn a minimal amount of points, you’ll get one chest and 20 Elemental Tokens, so don’t be worried about scoring a high amount of points.

If you do want to get a better ranking and higher chance of earning the Monte Island Token, you can also use a Swiftness Robe to get a speed boost and open more chests. Their location is indicated on the mini-map and they rotate on a predictable pattern, so you can position yourself where the next ones will appear. The pink symbols indicate the location of other participating players.

Usually, everyone picks an area and opens chests appearing in it instead of running around the island and compete with other players to open the chests. You’ll also have better chances of earning a good score by clearing the quest in low activity hours, since you’ll have more competition otherwise.