Open your minimap and prepare to grind the Mokoko seeds in Lost Ark. There are seven seeds to collect in the Yeon’s Barrier dungeon, which is an average amount. Those collectibles are among the longest grinds the game can offer at its Western release, with over a thousand of them to earn through your journey.

The seeds are scattered everywhere in the game, and the dungeons are no exception. With a focus put on exploration by the MMO game, you often have to keep an eye on secret content when entering dungeons.

Whether you’re entering the Yeon’s Barrier dungeon for the first time and don’t want to miss them, or you’re running it again to complete all of its content, here are the locations of the Mokoko seeds.

Fortunately, all of those seeds are pretty easy to get. The second one will be hidden on a roof, and to jump on it, you’ll have to defeat the surrounding enemies and destroy the items blocking the passage. Then you’ll see a yellow arrow appearing with the jumping option.

The other seed tricky to get is the last one because if you go too far, you won’t be able to come back to get it. So if you miss this one, you’ll have to run the dungeon over again. You can access this seed by jumping down on the second platform. It’s located halfway between the hallway and the last room. Don’t jump twice or you’ll miss it. 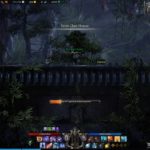