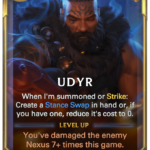 Riot Games introduced Udyr to Legends of Runeterra today. He’s a Freljord region champion that creates Stance Swap spells in hand and is arriving within the upcoming A Curious Journey expansion.

Upgrades to the Freljord region in LoR continued today via the reveal of Udyr in the upcoming expansion A Curious Journey, which releases on Feb, 16. The new five-cost champion creates a Stance Swap, a three-cost Slow spell that grants one of four possible Slow speed spells with a variety of utility options. Riot also revealed three supporting LoR followers for Udyr and the Stance Swap thematic deck: Hyara Allseer, Vulpine Wanderer, and Wrath of the Freljord.

Udyr level one is a five-cost LoR champion with 4/4 stats. Upon getting summoned or striking, Udyr creates a Stance Swap in hand. If you already have a Stance Swap in hand, the Slow speed spell has its cost reduced from three to zero. Leveling up Udyr requires you to damage the enemy Nexus seven or more times that game.

Level two Udyr has 5/5 base stats and still creates a Stance Swap when summoned and via Strike. A Stance Swap in hand will reduce the cost of the spell to zero, and Udyr gains +1/+1 for each Stance you’ve cast that game. Udyr’s spell is Spirits Unleashed, a Slow spell that grants allies +1/+1 and then deals one damage to everything. 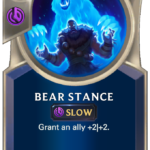 Hyara Allseer and Vulpine Wanderer are Stance Swap support units, creating the spell in hand upon getting summoned. Wrath of the Freljord is a powerful eight-cost finisher that has 8/8 base stats and the keyword Overwhelm. Enemies with three or less power can’t block Wrath of Freljord. Shaman’s Call is a six-cost Burst speed spell that creates two Fleeting zero-cost Stance Swaps in hand.

Players can test out the new LoR champion Udyr and the Stance Swap-themed build via the release of A Curious Journey on Feb. 16.