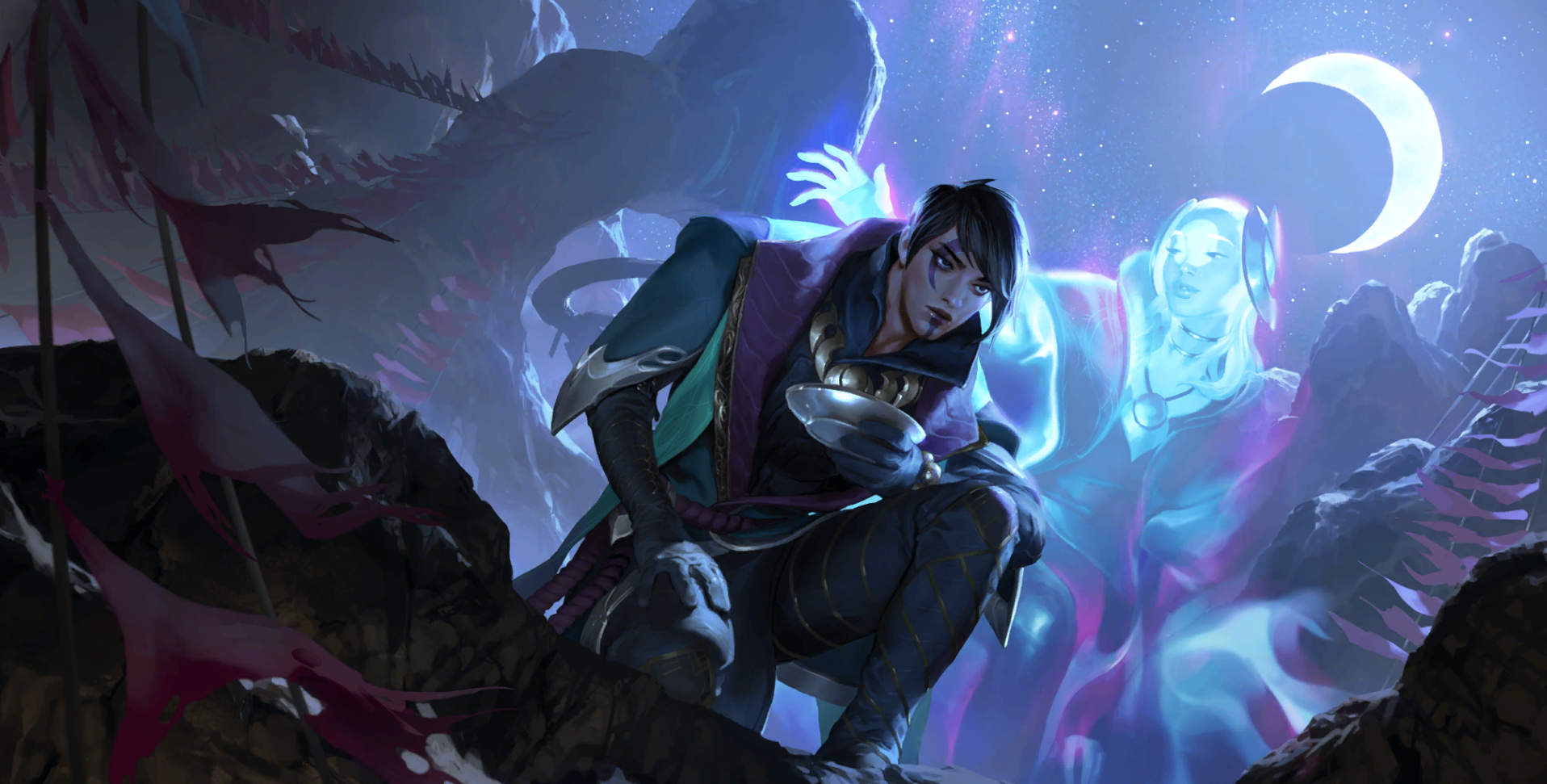 Legends of Runeterra’s newest champion from Targon released in a Champion Mini-Set Expansion before Empires of the Ascended—the first of its kind.

This initial expansion brought in Aphelios, the single-most complex card (accompanied by the longest accompanying text) in the game’s history. With new mechanics and five new weapons, any player trying to understand Aphelios will need to take the time to learn his ins and outs to truly master him.

Aphelios’ history, while short, has been an impactful one to LoR. Since his release, he’s found immediate competitive success. He dominated the ladder and helped assist in the second Seasonal Tournament with multiple appearances. After the tournament he received a notable nerf that reduced his health by one, making him more vulnerable to removal and weaker units and allowing for more counterplay. While Aphelios’ gameplay patterns are unique and varied each game, finding the right deck that fits your playstyle will be key to succeeding with him.

Here are some effective decklists to try out the Weapon of the Faithful. 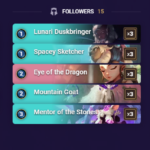 One of the standout decks from the initial launch of Aphelios’ release came from when he’s paired with Bilgewater. Twisted Fate was originally one of the most versatile “toolbox” champions that could answer different scenarios due to his Destiny Cards. As another toolbox champion thanks to Moon Weapons, both Aphelios and Twisted Fate can ward off threats from opponents and produce immense pressure if they’re left unanswered due to their constant threat of leveling up.

Since Boxtopus’ effect where he damages himself is a Play effect, Crescendum will keep him healthy, making him one of the best two-mana cards to summon from the weapon. Thanks to the vast amount of spells you play, Wiggly Burblefish and Zap Sprayfin both make a potent Elusive package that serves as an alternate win condition.

If you’re running into many Zoes on the ladder, Parrrley can be a card to consider adding to your deck since it’s another answer alongside The Flight. This is due to the fact that they’re both cards that can be played on the first turn if your opponent plays her early. If you’re running into multiple control decks, Eclipse Dragon is a fine late-game card to include due to its ability to conjure many late-game threats, in addition to its synergy with Lunari Duskbringer.

While Lee Sin’s best partners in the past were either Zed or Zoe for their aggression and beating an opponent with lucky draw sequences, Aphelios brings consistency thanks to his Moon Weapons. This build is best equipped to fight against midrange decks thanks to both Mountain Goat and Eye of the Dragon from Crescendum.

While this list foregoes Zenith Blade, normally a key card to Lee Sin’s OTK, since Aphelios can provide Overwhelm thanks to his Infernum, you can add three Zenith Blades to the deck if you’re facing off against multiple control decks. Concussive Palm and Sparklefly are both good options if the ladder is overwhelmed with Elusive decks.

Since the release of Cosmic Creation, Viktor (alongside Riven) has been a champion overshadowed by Zoe so much that they both received buffs during the same patch in which Aphelios was dropped. Since Aphelios can create multiple Moon Weapons each game, the newest Targon champion has some potent synergy with Viktor.

If you can manage to summon both Aphelios and Viktor to the same board and have them reach their leveled forms, all of your Moon Weapons will be free, which will quickly end the game in your favor.

This list has a lower-to-the-ground mana curve by focusing on the cheap discard synergies that both Targon and Piltover and Zaun each have. If you want the deck to be more aggressive, you can bring Lunari Shadestalker as an alternate unit to be summoned by Crescendum. Get Excited is also another option to throw away your discard fodder like Jury Rig and Stress Testing.

Aphelios also pairs up well with one of the newest champions from Empires of the Ascended, Taliyah. The Stoneweaver’s focus on Landmarks allows you to accrue mass value by duplicating one of the best Landmarks in the game, The Veiled Temple. Aside from Landmark support, Shurima also provides powerful board control tools like Quicksand and Rock Hoppers’ Roiling Sands.

Within the newest region, there are some powerful non-obvious combos to take note of. While copying Veiled Temple is your deck’s main goal, if you have a buffed-up unit, you can use Taliyah to copy your unit through the power of Ancient Hourglass for surprising value.

With the power of Predict, you will be able to more consistently find your combo pieces or key cards, Aphelios, Taliyah, and The Veiled Temple. Once you copy your Temples, you will be able to obtain massive mana rebates alongside powerful buffs. When either Taliyah or Aphelios reach their second levels, you can oftentimes end the game with them due to the massive board control and damage that they can provide.

Desert Naturalist is also an important card in this deck, you can trade in your weaker Landmarks for a 5/4 Rockybear or even destroy your opponent’s Landmark to destroy the opponent.

In the past, Yasuo decks have been shoddy and inconsistent due to their reliance on drawing key cards like Fae Bladetwirler, Stun Cards, and Yasuo himself. Since Aphelios can provide both stuns thanks to Gravitum and a way to tutor out Fae Bladetwirler with the power of Crescendum, the deck can now have a new avenue to depend on getting these important cards to the field faster. If you’re having trouble drawing into Yasuo, Solari Priestess will help bring Yasuo to your hand thanks to Written in Stars.

Similar to the Zoe/Diana mono-Targon deck, Aphelios now takes the other Lunari assassin’s spot to bring multiple options to claim victory. The goal of the deck is to have multiple cards to fight against aggressive and midrange decks while also having a strong controlling shell thanks to the multiple Invokes.

Since the deck is running three non-Targon cards to consistently hit Mountain Scryer’s Allegiance, there are multiple tech cards you can look toward from other regions to complete the deck, even ones that aren’t listed here.

If you’re facing off against aggro, Radiant Guardian and Boxtopus can help either recuperate early health or fight for board better from Crescendum. To answer midrange, The Grand Plaza and Grizzled Ranger both provide a wealth of stats and keywords to help contest against the opponent.

If you find yourself struggling against control decks, Atrocity can help provide a surprise finisher, while Aftershock, Crumble, and Single Combat can provide quick removal against key targets. If you want to avoid the small chance of your Allegiance effect whiffing at all, you can fill in the three non-Targon card spots with cards like Hush, The Flight, or Starshaping depending on the meta.

Try out these decks and learn how to play as and against Aphelios.