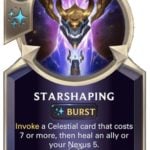 A total of 56 spells were added to Legends of Runeterra in the new Call of the Mountain set. But picking the best ones to craft isn’t an easy choice.

A majority of the new spells added to LoR within the CoM set are situational. A few stand out from the crowd, however, due to spell cost and value.

From Nightfall effects and silencing a unit to invoking powerful Celestial cards, here are the 10 best LoR spells from CoM.

Drawing two different Dragons allows a player to go wide midgame or stabilize should they brick or run out of gas. These circumstances are situational, though, and wouldn’t justify Dragon’s Clutch as a three-of in a deck. Being able to grant all Dragon allies a buff at Burst speed as another option makes the spell worth including since it can also be used as a finisher or as a way to trade for key units.

Bastion will see a large amount of gameplay in Targon builds due to it providing an ally with Spellshield this round. With a mana cost of three, it’s similar to Barrier in that it’ll protect a unit for that round. Spellshield provides ample protection to a unit because it negates the next enemy spell or skill that would affect the unit it’s protecting.

Decks that run any of the new Targon champions are likely to use Bastion, specifically Taric and Leona. Rahvun, Daylight’s Spear and Broadbacked Protector are two Targon units that will benefit from having Bastion in a deck, allowing them to put their work in.

At a cost of only one spell mana, Duskpetal Dusk fits right into Nightfall archetypes. It’s a Burst speed spell that reduces the next unit with Nightfall that you play this round by one.

Having Burst speed prevents your opponent from being able to respond to it. And reducing the cost of already low-cost Nightfall units makes Duskpetal Dusk a solid choice in a number of different builds that use Nocturne or Diana.

Help, Pix! is Lulu’s signature spell, providing an ally with Barrier or giving an enemy Vulnerable this round. Despite not being able to cast the spell “in combat or in response to a spell,” the one-cost Lulu spell still provides a decent amount of value.

Using Vulnerable proved effective in Rising Tides and will likely play a major role in Call of the Mountain as well. Most opponents won’t waste a Deny on a one-cost spell and having the option to choose either Barrier or Vulnerable makes the spell less situational.

Pale Cascade is another spell that supports Nightfall effects. It’s a two-drop with Burst speed that buffs an ally +2/+1 this round. And when it’s not the first card played that turn, its Nightfall ability draws one card. Two mana for card draw and a combat trick is pure value. Pale Cascade is also Diana’s signature spell.

Stalking Shadows is a two-cost Burst speed spell that allows a player to choose a unit from the top four cards of their library. The unit goes into their hand while the other cards get shuffled back into the deck. In addition to being able to choose a unit from the top of your deck, Stalking Shadows also creates an additional Ephemeral copy of the unit in hand.

Two cards for the price of two mana is a solid deal. Being able to choose a card from the top four in your deck makes crafting Stalking Shadows a no-brainer when playing Shadow Isles. There’s a chance it can brick, though, if the top four cards are only spells and champions.

Cheap combat tricks are highly effective in Aggro and Midrange builds. Troll Chant is a unique spell in that it buffs up your unit’s defense by two while decreasing the power of your opponent’s unit by two. At a spell cost of only two mana with Burst speed, it’s an ideal combat trick. Troll Chant also synergizes with your Fearsome units by reducing the power level of an opponent’s unit if applied pre-combat.

Demacian Bannerman decks are likely to remain a top-tier archetype in CoM, especially with the addition of For the Fallen. It’s a pricey and Slow speed spell on its own. But thanks to a reduction in cost of one for every Elite summoned, For the Fallen becomes a spell worth including in Bannerman builds.

For each ally that died in the round For the Fallen is cast, you get to summon a Dauntless Vanguard, a 3/3 Demacian Elite. When played on a defensive turn following chump blocks in conjunction with Vanguard Bannerman, an open attack the following turn can possibly become lethal.

Hush is an ideal spell within Control builds, able to Silence a unit this round while also creating a Fleeting Hush in hand. It’s a three-drop at Burst speed that’s able to remove all card text, effects, and keywords from champions and followers.

Hush is a tempo spell, buying time until your Control deck can kick into gear and finish off an opponent. It also weakens an opponent’s card via Silence, opening up removal opportunities that may not have been present prior to it being played.

Undervalued when revealed during the LoR spoiler season, Starshaping has all the markings of an “S-tier” spell. Its five mana cost is slightly daunting but well worth it in that it’ll Invoke a Celestial card that costs seven or more. Starshaping also heals either an ally or your Nexus for five.

Using the keyword Invoke will more often draw a Celestial card with a lower mana cost. But Starshaping makes sure you draw a powerful card that can finish off a game. In builds using Aurelion Sol, Starshaping is an alternative finisher that’s worth crafting.