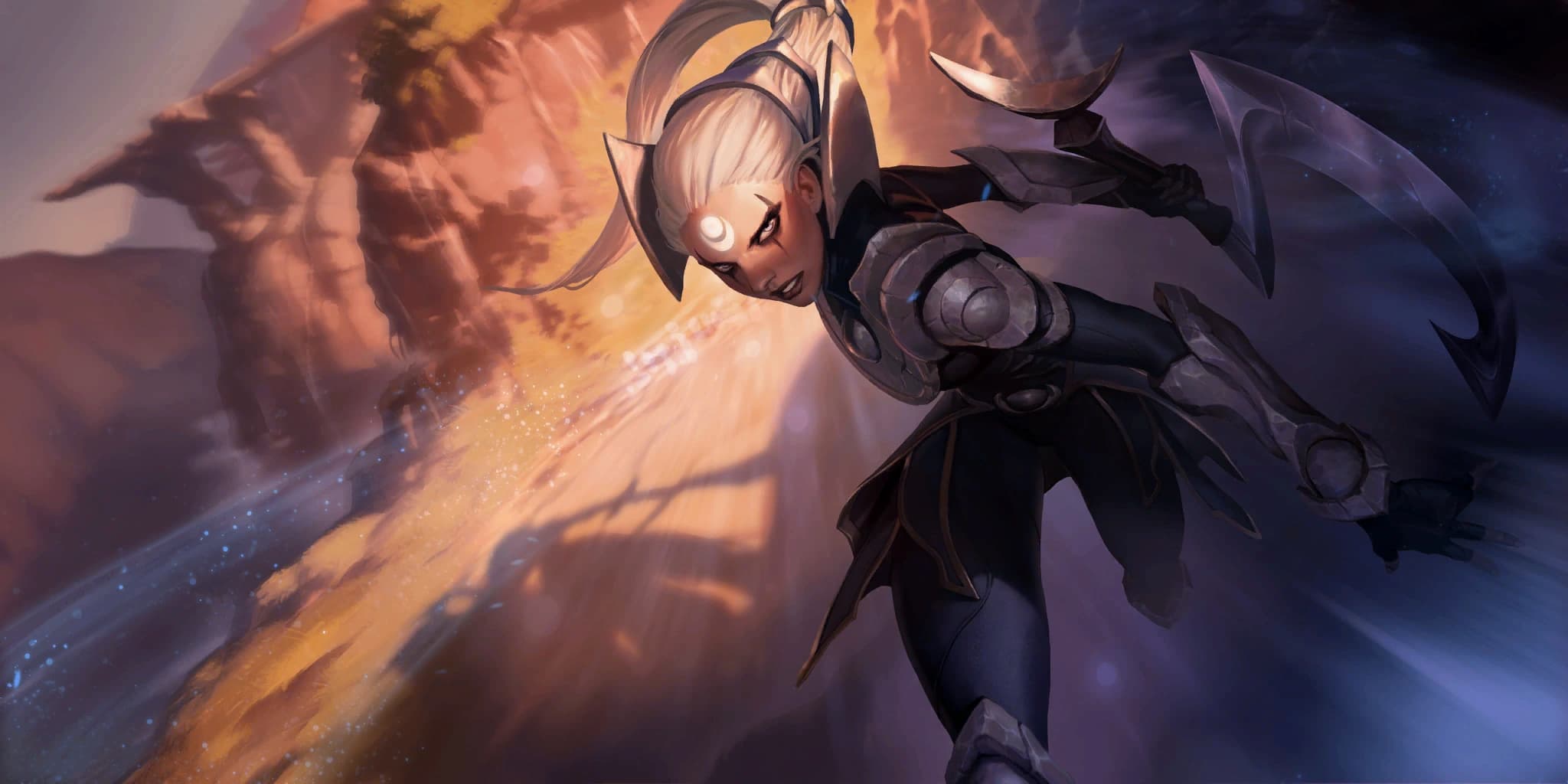 The release of Gwen as a Legends of Runeterrra champion in the Forces from Beyond expansion has opened up the meta, specifically with Diana and the Nightfall archetype.

Nightfall is an archetype that was first introduced into LoR through the Call of the Mountain expansion. The build encourages aggressive attacks through Diana as its champion. It also contains low-cost spells and followers to trigger Nightfall, an effect that is activated upon playing or casting a second spell or unit during the same turn, allowing for combo and Midrange strategies.

Playing Diana and her Nightfall package in LoR encourages solid card game fundamentals, like pacing and playing around threats. It also caters to new and casual players through Diana’s aggressive attacks on Curve. I’ve always enjoyed the archetype since it forces players to understand an opponent’s deck while putting together a line of attack and defense that resembles unlocking a puzzle to trigger Nightfall at the right moments. 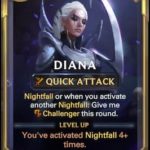 Discovering various lines to play through Nightfall teaches players good card game fundamentals like patience and the spending of mana throughout a turn. It also shows players how to put together a combo, whether it’s for lethal damage or board-state advantage. The archetype has always lacked a consistent form of lethal damage, relying more upon aggressive strategies than capitalizing off potential combos.

Gwen adds another layer of depth to the Nightfall archetype, creating more of a Tempo-style deck that is versatile while also having a solid win condition. The Shadow Isles champion uses the Hallowed keyword, a LoR mechanic that encourages aggressive gameplay by adding +1/+0 stats to the first attacking unit and Gwen. 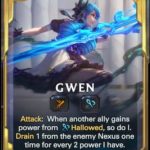 Hallowed stats are created by sacrificing or killing off your units that have the Hallowed keyword. Every Hallowed death equals more power as the mechanic stacks throughout a game. The problem with Gwen and her Hallowed support package, though, is that a majority of the followers are weak units that provide little to no value outside of dying for their Hallowed stacks.

Pairing Gwen with Diana creates a partnership that solves both archetypes’ weak spots. Gwen and the Hallowed mechanic pump attacking stats that allow Diana to take out almost any unit or champion on her attack turn. And the Nightfall package creates a board state presence that’s sustainable throughout a game.

Card games are full of depth and layers, providing players with multiple lines of action that can either win or lose games. Most new and casual players gravitate toward Aggro decks when playing PvP, dropping cards on Curve while attacking each round. And others will test out Midrange builds, expanding upon aggressive attacks with the use of combo pieces.

Pairing Gwen and Diana together expands the Nightfall archetype into more of a Tempo build while filling in the weak spots that exist in both archetypes.

Nightfall builds have a low Curve, wanting to cast at least two or more spells/followers each turn. Hallowed units are chump blockers, providing powerful attacks while potentially leaving a player vulnerable on their defensive turn. Mashing the two archetypes together unlocks multiple ways to play while always having a solid win condition.

The deck is optimal for new and casual players as it challenges players without ever becoming a complicated mess. Hallowed Nightfall has a foundational game plan that is flexible, allowing players the option of multiple lines of play without running too much of a risk should that line not work out. And the deck has multiple win conditions, able to hold its own against new and existing LoR meta decks typically played on the ladder.

The Mulligan and early game

Four cards players will want to start a game with are Boisterous Host, Diana, Sultur, and Lunari Duskbringer. Solari Sunhawk and Strike up the Band are solid backup options. If on the draw or defense for your first turn, always bank your mana if the opponent passes and doesn’t play a unit. Having that one spell mana works great with Lunari Duskbringer to trigger Challenger on Diana early on.

Boisterous Host is an early-game chump blocker that can also swing in for an easy two damage if you have the attack token to start the game. Sultur is also a low-cost solid chump blocker who adds value to the build by creating a Husk token with a randomly generated keyword that’s ideal on either Diana or Gwen. Solari Sunhawk slows down Aggro decks while providing tempo throughout the game and Lunari Duskbringer is a cheap chump blocker who creates a Duskpetal (a one-cost spell that reduces the mana cost of Nightfall cards) in hand when summoned or played.

Players shouldn’t focus on only stacking Hallowed triggers during the early game but rather play tempo, losing as little health as possible while building a board and adding a few Hallowed stacks along the way. Diana can apply early-game pressure with Hallowed stacks and through the triggering her Challenger effect via Nightfall. And Strike up the Band is a great turn three/four spell to play when on defense, accelerating the Hallowed stacks while banking three spell mana for the midgame stages.

The Hallowed Nightfall midgame stage starts at either turn four or five with the attack token. Dropping Gwen during these turns is important since she needs to have dealt 10 or more damage to level up, which is essentially two attack turns. Opponents are also going to target Gwen with removal spells, which is fine because she then becomes the strongest dead ally to synergize with Eternal Dancers—the best Hallowed follower and one of the best LoR cards from the Forces from Beyond expansion.

Players have three goals to accomplish during the midgame: maintain health, create card advantage through Nightfall, and chip away at an opponent’s health to under 10. Doombeast is a great midgame Nightfall card that slots into this strategy, as does Solari Sunhawk through her stun of the strongest enemy. And Lunari Shadestalker can chip away at an opponent’s health when cast with Nightfall, granting her the Elusive keyword.

There are multiple sources of card draw within the Hallowed Nightfall LoR deck, preventing players from running out of gas. Unto Dusk is a two-cost Burst speed spell that can draw a card while also activating a unit or champion’s Nightfall trigger (Diana and Doombeast). Pale Cascade is a solid combat trick that also draws a card when played as a Nightfall trigger. And Glimpse Beyond can draw two cards when used on a unit that is going to die anyway, often preventing an opponent from gaining any value from the death from that unit.

Drawing cards throughout the midgame keeps the Diana and Gwen Hallowed Nightfall deck from running out of gas while also finding the cards you need to end the game.

The Hallowed Nightfall deck has a total of three win conditions. Players can win through aggressive Diana and Gwen attacks with a boost in power from Hallowed triggers. It’s a fun way to win when the stars and moons align, but it’s also inconsistent. Dropping The Winding Light with Nightfall triggers is another good way to win a game, pumping your entire team with +2/+1 stats and Overwhelm for that round.

And the most consistent way to win a game with Diana and Gwen is to play around the spell Atrocity. The seven-cost Fast speed spell in the Shadow Isles region kills off an ally to deal damage to anything, with anything being the enemies Nexus.

Hallowed stacks synergize with Atrocity in that a unit’s power is typically pumped to around eight to 10 upon attacking during turn six or seven. Players can open attack first, potentially chipping away at an opponent’s health to under 10, and then cast Atrocity once the opponent has depleted their mana for that turn to win the game. Atrocity can also get played on an opponent’s attack turn, although their health will typically need to be at four or less.