The final day of the brief teaser season for Legends of Runeterra’s upcoming event, Sentinels of Light, is here. Only one card from Ionia was revealed today, Scattered Pod. But the LoR Twitter account also showed off two skins for the Ionian champs featured in this event, Karma and Irelia.

Scattered Pod is a rare six-mana unit with 5/6 combat stats, the Attune keyword, and an effect that activates when played that lets you draw a Slow, Fast, or Burst speed spell from your deck. In addition to these abilities, Scattered Pod has an Enlightened trigger that grants it Elusive when you reach 10 maximum mana.

Scattered Pod is a retrained version of the Cloud Drinker card from the Foundations set. Retaining its spell synergistic identity, Scattered Pod aims to grant more value by letting you tutor a specific type of spell from your deck. In addition, the Attune keyword gives you one spell mana back after the Pod is summoned, giving you a better chance of casting that spell.

Aside from these benefits, Scattered Pod becomes a more effective top deck draw in the late game. This is due to the fact that it can provide a sizable body that can either block Elusive units defensively or deal five damage with the Elusive keyword it gains at 10 mana.

Scattered Pod will be an interesting tool for combo and value-oriented decks and players who track their cards well will be rewarded for being able to fish for specific spells. 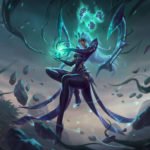 Aside from the last card revealed, Riot has shown the two key Ionian figures for the event and the LoR version of their League champion skins, Sentinel Irelia and Ruined Karma.

Try out this card and more when LoR: Sentinels of Light is released on July 14.