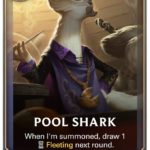 Bilgewater is a port city in Runeterra known for its gambling halls and swindling merchants. With the reveal of Twisted Fate tonight, three units were also announced to support the card-drawing champions archetype: Black Market Merchant, Pool Shark, and Brash Gambler.

Pool Shark is a basic one-drop 1/2, who, when summoned, draws one Fleeting card the following round. Upon first glance, Pool Shark isn’t a highly playable unit because it doesn’t support Twisted Fate’s Level Up prior to him getting played. But it may have potential due to its ability during the mid and late game, especially by drawing a Fleeting card.

The final LoR unit revealed tonight was Brash Gambler, a four-cost 4/5 with plenty of upsides. To play her, you must discard two cards, which fits nicely into a Jinx build. When Brash Gambler attacks, you draw two Fleeting cards, supporting Twisted Fate and a handful of other LoR archetypes.

Twisted Fate and his rowdy crew drop into LoR on April 28 via the new Rising Tides expansion and on mobile by April 30.