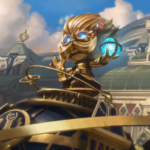 With the recent change Riot Games made to Legends of Runeterra’s card release strategy, sets are now divided into three expansions, adding more frequent card updates. LoR’s newest set, Call of the Mountain, is the first set to follow this approach, and it’s about to release its second expansion after a new teaser on Twitter today.

While the teaser did not reveal any cards, it did show off varying famed spots within the League of Legends universe. The first spot that was shown is a university boasting a Heimerdinger statue, which alludes to the previous Heimerdinger short. The second location that was mentioned is the famed bridge featured on the League ARAM map, the Howling Abyss, in Freljord. The final location that was teased was a spooky and ominous spot in the Shadow Isles. In the lore, before its corruption to the mists, the Shadow Isles were known as Helia, so this could be showing off another major spot to the story.

With the stages set for the next expansion, the card reveal season can start any day now. LoR’s next ranked season was stated to coincide with card releases within a set, so this expansion is dropping sooner than players may anticipate.

LoR: Monuments of Power is expected to release when the current ranked season ends, which should be Oct. 14.