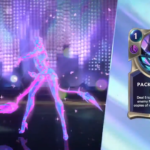 Legends of Runeterra’s second event, the K/DA ALL OUT Event, is officially launching today. Similar to LoR’s first event, Spirit Blossom, this celebration is also a simultaneous crossover between Riot’s other games, League of Legends and Teamfight Tactics.

Aside from cosmetics, some of which can be obtained without purchasing the event pass, there are also free cards for players to add to their collection. There are five epic spells that are based on the K/DA singers.

To collect these cards, players must play LoR to claim event currency that’s used to progress through the battle pass. Although the cards are free, it’ll take a few days to collect all of them.

Here are the five new K/DA LoR cards and how to use them.

This one-mana Slow spell from the Shadow Isles allows you to potentially set up crazy combos by augmenting multiple copies and then turning them into Pack Your Bags after playing them in quick succession. While Counterfeit Copy looks like a potent card to combo with Go Hard at first glance, Zapp Sprayfin and Karma both have strong synergy with this card.

Level Two Karma allows you to alleviate the amount of Go Hards you need to activate. She can double cast Go Hard, dealing 10 Nexus damage while clearing most wide boards. Zapp Sprayfin can also specifically tutor your Go Hards if you skew your deck to only include it as your cheap spell.

Go Get It is a Fast Ionian spell comparable to Shadowshift, except it scales upward with the strength and cost of the unit due to it being more expensive than its similar card. While this combat trick may look awkward to use, it has potential as a way to bait out removal while retaining tempo since the Ephemeral copy keeps its stats in combat and you can replay your recalled unit after combat.

Go Get It also has synergy with Level Two Karma since she can recall both the original unit and the ephemeral one, allowing you to make a final push before you use your attack token.

Out Of The Way

Out of all of the cards introduced today, this one can alter your game in a way that’s never been achievable before now. This Slow Targon spell allows you to make friendly buffs given through effects permanent instead of their usual temporary state, except for Barriers. There are over 54 cards in the game that provide temporary buffs for either combat stats or keywords.

While this effect does enhance your game after casting it only once, spending five mana for such an effect that doesn’t add onto your board means you need to invest in a heavy tempo loss the turn you play it before receiving any benefits.

As an eight-mana slow spell from Piltover & Zaun, Give It All aims to serve as a finisher if you have a wide board with a singular tall unit. Aside from raising the stats of your weak units to match your strongest unit, it also allows your keywords to cascade into all of your units. This means that Fearsome, Elusive Scout, and Overwhelm are all potent keywords to aim to have among your units since they can deal immense damage or evade opposing interaction.

This Ahri-themed spell hailing from Freljord is an ultimate finisher in a similar fashion to Warmother’s Call. While Warmother’s Call is a longer value-generating tool that wants to grind out the opponent with overwhelming value, Feel The Rush is a faster and immediate version that aims to finish the game quickly.

In terms of already established metas, Feel The Rush synergizes well with Targon and Freljord Ramp strategies since it can serve as an extra tutor for both Trundle and Aurelion Sol. While Aurelion Sol wouldn’t gain bonus stats, Trundle would obtain extra power and health—and the bonus strength also counts toward helping Aurelion Sol achieve level two.

For strategies that don’t exist in the meta right now, it’s possible to cheese opponents by pairing Feel The Rush with Piltover & Zaun to add Teemo and Ezreal to your deck. If you play Feel The Rush with both of them in your deck, you’re given two 10/10 Elusive units, which can end your opponent instantly if they don’t have combat tricks or Elusive units of their own.

You can add these cards to your collection by logging in once the LoR X KDA event goes live.