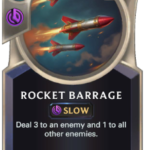 A total of three new Legends of Runeterra spells will get released with the launch of Patch 3.4, designed to improve regions that lack answers to several top-tier archetypes within the meta.

Scheduled to go live on March 30, LoR Patch 3.4 will include three new spells within the regions Piltover and Zaun, Targon, and Shurima. The spells—Desert Duel, Celestial Wonder, and Rocket Barrage—were designed to improve regions that lack the tools necessary to deal with go-wide boards and cards with the Elusive mechanic, according to Riot. None of the LoR spells that are getting added within Patch 3.4 interact with board states at Burst speed.

Reducing the power of the enemy unit prior to Striking is cute and including Desert Duel within the Shurima region should provide additional utility options. The Slow speed spell was added to improve the Shurima game plan when on defense, according to Riot.

Celestial Wonder is a five-cost Fast speed spell that should improve Targon builds matched up against go-wide Aggro builds. Interacting at Fast speed is a nice upgrade from Crescent Strike and it hits one additional target over Ground Slam. Celestial Wonder should provide additional options during the late-game stages, giving your units a chance to hit for lethal.

Players can check out the three new LoR spells and over 30 balance changes to existing cards when Patch 3.4 goes live on March 30.