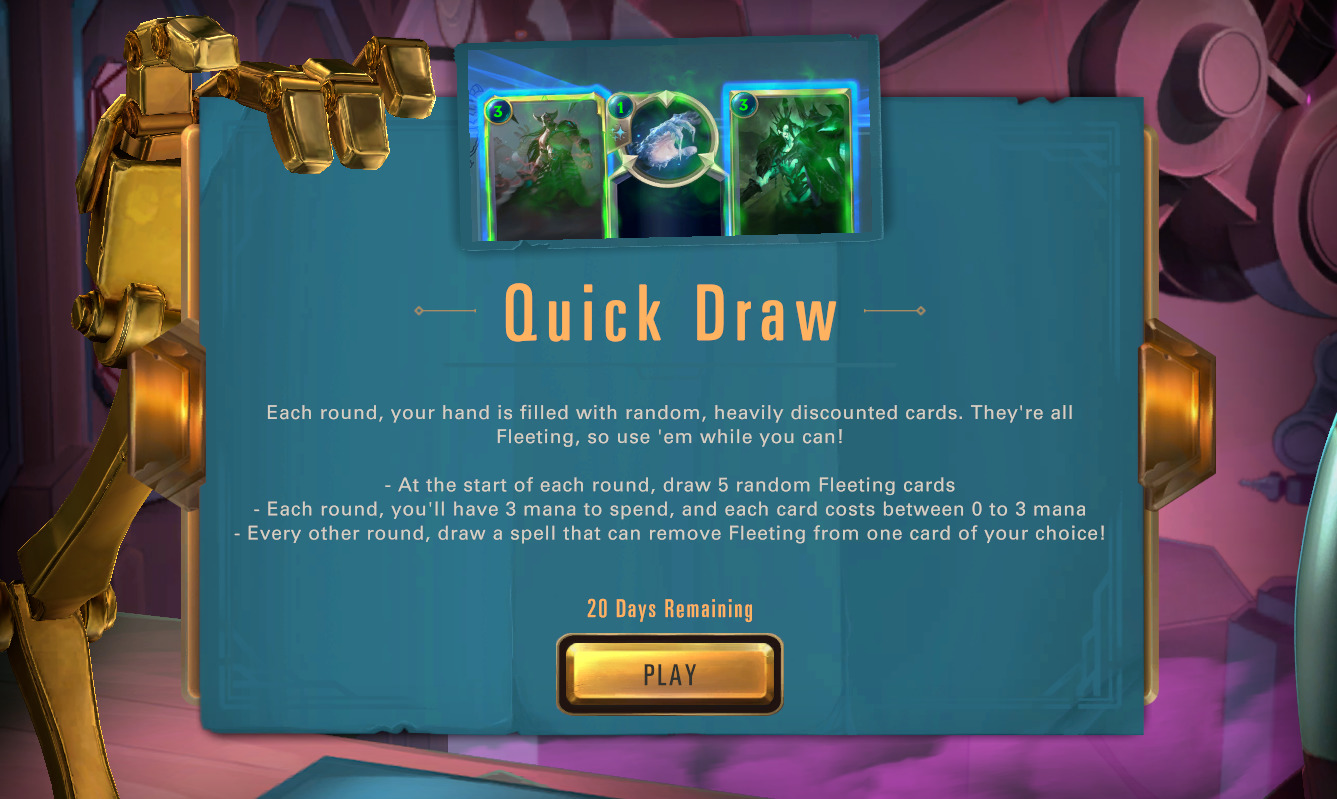 Legends of Runeterra hit the halfway point for the Spirit Blossom event with Patch 1.7, which introduced a new Lab named Quick Draw.

The newest Lab gives players a random deck with an altered starting rule. At the start of each round, players draw five cards with Fleeting on them. Cards with fleeting are forcibly discarded at the end of the turn. In addition to this, players are constantly capped at three mana crystals per turn.

To alleviate these restrictions, cards also randomly cost between one to three mana. At the start of the game, and every other turn, both players generate a free Prolong card, which removes Fleeting from any card of their choice.

Since the nature of this Lab is purely random, from the cards in your deck to the way your cards are discounted, the goal is to constantly look for ways to improve your odds of winning. Starting from the mulligan, you should throw away any low-value cards with low original costs since higher-cost cards will always be discounted to a point where they’re playable.

Another skill-testing aspect of the Lab is the free Prolong cards you’re granted every other turn. If there’s a strong reaction card you can’t use effectively on a turn before it’s discarded but know it can destroy your opponent later, using a Prolong on that is advisable. Prolongs themselves aren’t Fleeting, so if there’s nothing worth using Prolong on in your hand, you’re free to keep it without consequence.

In addition to your three-mana starting turn, you start the game with three spell mana, so you can potentially cast more cards in the earlier stages of the game. Since you want to gather as much value as possible, making sure you don’t waste excess mana (ending a turn with more than three mana available) is another key to victory.

Due to the way the Lab is set up, some cards are absolutely worthless. Cards that gain you random cards from your regions (like Insight of Ages) won’t help you gain any cards since your deck is considered regionless. Some cards may also whiff naturally (like Lure of the Depths) because your deck may not have supporting cards to properly draw into. So avoiding these cards during the mulligan and spending less priority on them if they cost any mana will assist you in the long run.

Players have until LoR’s Patch 1.8, which is coming a week later than usual, before the next Lab augmentation arrives. LoR Patch 1.8 is set to go live on Aug. 26.