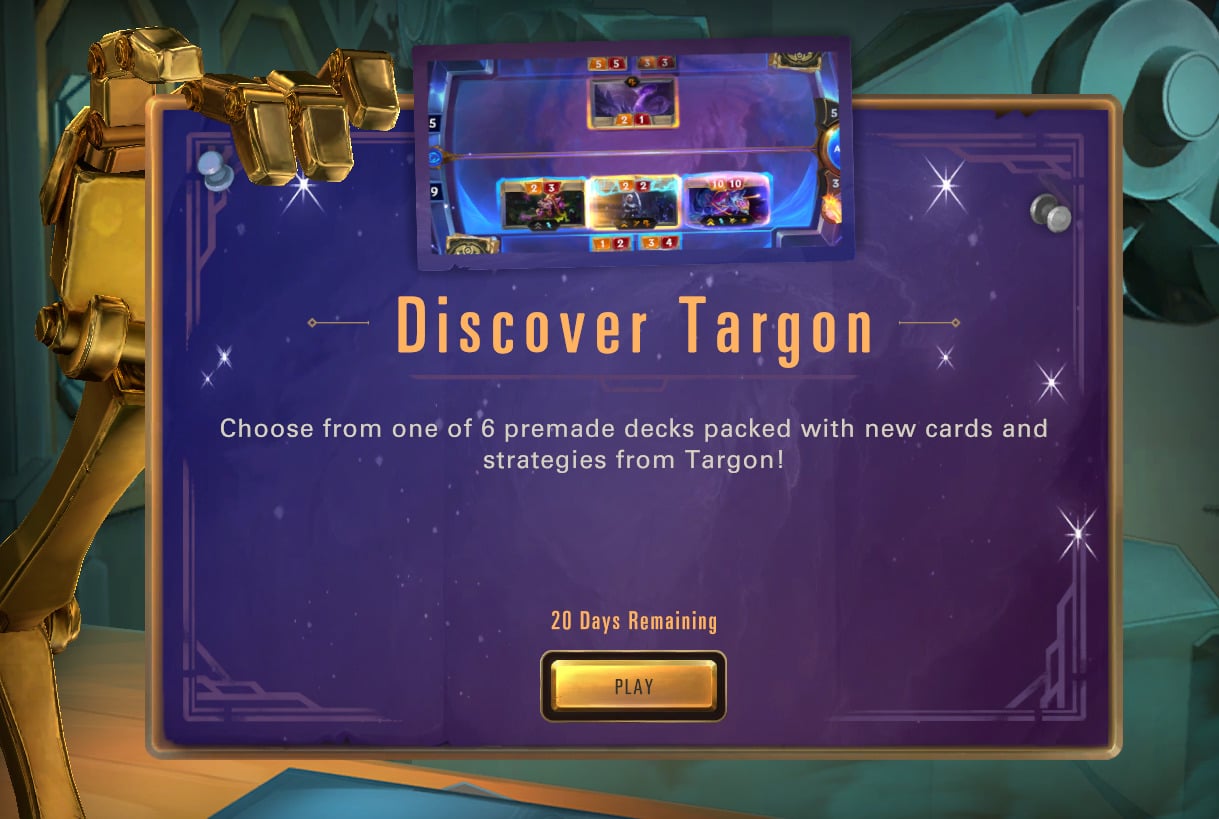 Legends of Runeterra Patch 1.8 brought the first third of the newest Call of the Mountain expansion. In addition to the start of the new set, there is a new Lab, Discover Targon, for players to test out the new content with six new premade decks.

While the Lab does nothing to change gameplay, Discover Targon allows players to test out the new cards in a low-stakes environment. If you’re looking to win a lot of the labs you participate in, then the decks are ordered in matchup strength against one another. But since the Lab is casual by nature, using this time to get acquainted with the mechanics of each archetype and keyword is also optimal.

Here are the six decks that you can pick from:

This archetype lets players practice with the Nightfall keyword. Nightfall cards draw their power by not being the first card played within a turn. This means generating cheap cards, like Duskpetal Dust or Gems, will allow you to reliably proc Nightfall each turn.

Players that try out Nightfall and enjoy the playstyle may also want to consider splashing a few Daybreak cards into their deck. This is because Daybreak cards are the exact inverse of Nightfall, drawing their potential by being the first played card in a turn.

This deck lets players practice one half of the Support shell introduced in Call of the Mountain: the Taric and Gem package. This shell is paired with the Noxus region, as it also has a few Support cards and lets the aggressive nature of the region team up with the utility of Targon.

Players that enjoy the combo and support potential of Taric may find viability when Taric is paired with Lee Sin. Both enjoy multi-spell casting and can lead to ridiculous damage numbers when Zenith Blade is thrown into the picture.

The Friends Forever list shows the second half of the previously mentioned Support shell, with Lulu as the main focus in this list. The deck is a little more straightforward than the Taric version, as you have to aggressively mulligan for a play for turns one through three. Once you get a strong Support board and level up Lulu, you have the ability to control the board due to Help, Pix! and your units buffed by your Support cards.

Players having fun with Lulu and her support-related cards may find success in bringing up Zed and Elusives into the mix. This is because that package adds to the snowball nature that Lulu attempts to push with her playstyle.

Star Ramp’s main focus lets players try out the Behold mechanic of Freljord. When a card from Freljord with Behold is played, it gains its bonus powers if you’re holding an eight-mana card (or have it in play). This means this deck has mana ramping potential with Faces of the Old Ones and Wyrding Stones. Trundle exemplifies this playstyle; when he’s dropped on turn five, he can contest most boards and survive. But he also provides a consistent eight-mana source with his Ice Pillar.

Once you reach eight mana you can run over your opponent with expensive cards. Leveled up Trundle and Tryndamere are both titanic cards that are difficult to take down. They also have Overwhelm and high power, which also puts opponents on a timer before being defeated.

Players that enjoy Star Ramp may want to consider pairing up Trundle with Aurelion Sol and Invoke cards. The playstyles fit each other and the values that Celestials provide is immense.

Aurelion Sol is the late-game conductor which brings all the Celestial cards together. Once you drop Aurelion Sol, games will usually end quickly as you will either overpower your opponent with immense value or your opponent will try to make one final push to finish you off.

If Invoking the power of threat after threat speaks to you, then consider pairing Aurelion Sol and Invoke cards with either Shadow Isle or Freljord. Shadow Isle has a ton of removal options which also helps stall for more time. Freljord has a ton of ramping options from Catalyst of Aeons, Wyrding Stones, and the new Faces of the Old Ones.

Blaze of Glory has a large focus on the Daybreak keyword. Daybreak as a whole wants to get on the board quickly and run the opponent over with its extra bonuses it’s provided for being the first played card in a turn. If you mulligan for it, you can often times find a consistent curve that levels up Leona by the same turn you play her.

This deck pairs Leona up with the mid-range focused region of Demacia. But due to the easily accessible nature of the Daybreak keyword and its early-game power, this mechanic’s shell can fit into any region and strategy you enjoy.

Players have until LoR’s next patch to try out every new card and experiment with Discover Targon before the next Lab experiment arrives. LoR Patch 1.10 is set to go live on Sept. 16.