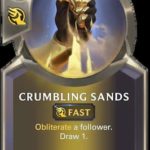 A hidden Legends of Runeterra deck locked behind conditions maintains its value in the meta through solid design choices.

Individually, there are nine cards in the Emperor’s Deck. Emperor’s Guard has the most copies at four, along with two copies of Eternal Gladiator, two copies of Golden Herald, and two copies of Emperor’s Prosperity. Ascended’s Call is always placed at the bottom of the deck but can get shuffled via Predict.

Here are the nine individual LoR cards within the Shurmima Emperor’s Deck:

Players can also choose one of three Emperor’s Deck cards to play, except for Ascended’s Call, via the Shurima spell called Glory’s Call. The six-cost Burst speed spell has a cost reduction of two for every Ascended ally from that game. Allies that can Ascend are Azir, Renekton, Nasus, and Xerath.

Upon casting Glory’s Call, the spell will Manifest three possible cards from the Emperor’s Deck that cost nine or less. The only 10-cost card in the unique Azir deck is Ascended’s Call. Glory’s Call also allows players to have access to the Emperor’s Deck cards without running Azir as a champion. And even if Azir is included in the deck, having additional options to access high-level LoR cards is never a bad thing.