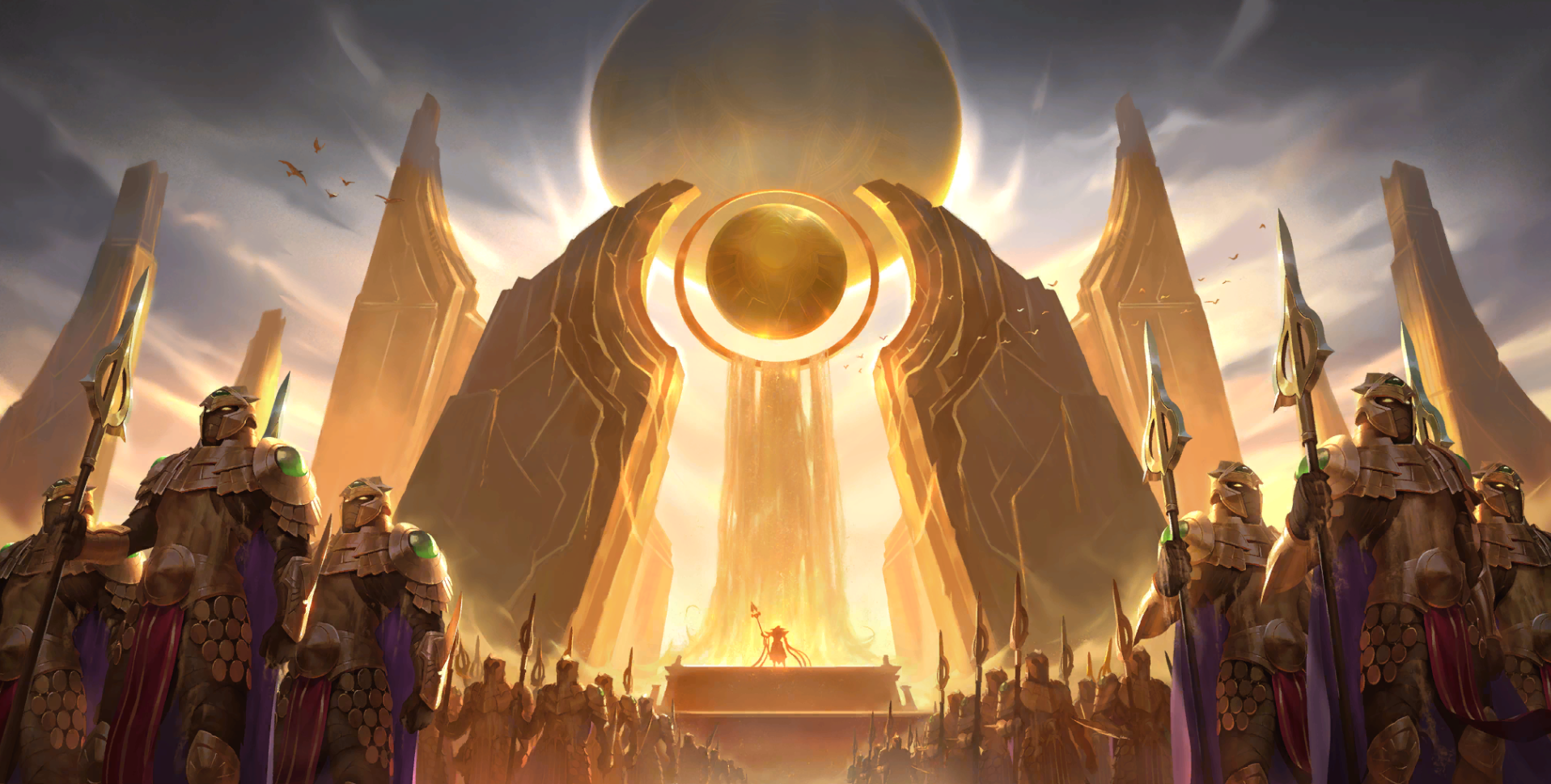 Azir, the last of the three Ascended champions for Legends of Runeterra’s Empires of the Ascended expansion, has finally been revealed.

Azir is set to bring an entirely new uncollectible deck for players to wield for those willing to spend the effort of restoring the Sun Disc. These cards that are found in the Emperor’s Deck are strong and will quickly turn the battle in your favor if you live long enough to play them all. 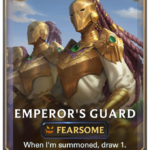 Emperor’s Prosperity is a two-mana Burst spell that draws two cards from your deck. There are two copies that can be found and it’s efficient for its cost. If you’re looking for specific answers within your new deck, Emperor’s Prosperity will aid you in finding those other potent cards.

Emperor’s Guard is a two-mana 5/4 unit with Fearsome and an ability that draws you a card when it’s summoned. Since there are five copies of this card, it’ll be the most common card you’ll see. While this isn’t the strongest card found in the deck, 5/4 stats for only two mana are still premium for its price.

Golden Herald is a five-mana 6/6 unit with a Play and Round Start ability that summons two Sand Soldiers while granting them +2/+2 in bonus stats. With three copies of this Herald, these will provide a tall board of 6/6 stats to attack and defend for you, as well as a wide board of two separate Sand Soldiers with 3/3 stats every turn.

Shimmering Mirage is a three-mana Burst spell that summons an exact copy of an ally but with the Ephemeral downside. After playing the Mirage, you draw one card. There’s only one copy of Shimmering Mirage, but it can provide either the utility or extra damage for a finish.

Since it’s a Burst speed spell, you can copy a high-power unit when it’s your turn to attack to effectively double your power and surprise your opponent with a lethal opportunity. In addition, since most of Azir’s units draw one card, Shimmering Mirage can be used to dig through your new deck faster if you target one of the Emperor cards.

If your opponent is trying to find a potential last-minute lethal play with sneaky Elusive units, you can fish for Crumbling Sands with your Burst speed card draw like Shimmering Mirage and Emperor’s Prosperity.

Sandstorm is a nine-mana Slow spell that Obliterates three enemy units or Landmarks of your choice. Comparable to the Celestial spell Supernova, Sandstorm will open the way by removing a wide array of threats on your opponent’s side of the board.

The main weakness of Sandstorm is its prohibitive cost and Slow speed, but the power of removal it provides is absurd. Due to Obliterate, units with powerful Last Breath effects will be unable to activate it and there’s no chance to be revived by effects like the Rekindler. In addition, since it hits Landmarks, you can remove some of the pesky abilities that your opponent might be trying to rely on.

General’s Palace is a five-mana Landmark that gives every enemy unit the Vulnerable debuff while it’s active. In addition, at the start of every round, the Palace will Rally, allowing you to launch an unrelenting attack every round.

While there’s only one copy of General’s Palace in this deck, it’s more difficult for opponents to remove Landmarks. In addition, the power level of General’s Palace singlehandedly allows you to dictate combat trades to always be in your favor due to the constant Vulnerable aura while giving you the ability to declare an attack every round.

Ascended’s Call is a 10-mana spell that summons both Renekton and Nasus. After they reach the board, both ascend to their highest level three forms and you Rally, giving you another chance to declare an attack. As the strongest card in this deck, Ascended’s Call will usually end the game on the spot due to the massive value and monumental stat lines that both of the brothers boast.

While Ascended’s Call is by far the most powerful card in the game, there’s only one copy within Azir’s deck, so use it wisely.

You can claim Azir’s power by activating the Sun Disc when LoR: Empires of the Ascended drops on March 3.