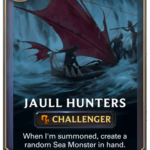 The highly anticipated Rising Tides expansion, containing 60 cards from the new Bilgewater region, has arrived in Legends of Runeterra

A total of 46 new Bilgewater units have been added to LoR, and a majority of them are ready to wreak havoc on the meta. A solid Follower to include in a deck must provide value beyond their stat lines, whether it be through a mechanic like Elusive, or from an ability that gains you an advantage when it’s needed most. We’ve hand-picked the 10 best Bilgewater Followers that may impact the LoR meta, ranking them in descending order.

Jaull Hunters is a three-cost unit stacked with value. It’s a 4/1 with Challenger, able to remove larger units your opponent may have, and it summons a Sea Monster to hand when it is summoned. Sea Monsters in Bilgewater are The Beast Below, Abyssal Eye, Vicious Platewyrm, Devourer of the Depths, and Shipwreck Horder. Jaull Hunters might pair well with Shadow Isles, as it’s able to get re-summoned via Kalista and Chronicler of Ruin, thus producing additional Sea Monsters in hand.

Burn decks have a new ally in Crackshot Corsair, a one-cost 1/1 who deals one damage to an opponent’s Nexus every time allies attack. She also slots nicely into Miss Fortune, Gangplank, and Swain builds. Crackshot Corsair is a cheap unit that can serve as a chump blocker when needed while helping a champion Level Up. And as the icing on the cake, she hits an opponent’s Nexus for damage at the same time.

Allegiance cards in LoR can either take a deck to a whole new level or hold it back. It’s still too early to know how Yordle Grifter will fit into the new meta, but we can tell that he’ll thrive at some point thanks to his summoning and Allegiance ability. Yordle Grifter is four-cost 3/3 that creates a Warning Shot, a zero-cost spell that pings an opponent’s Nexus for one in hand when summoned. He also draws one card from the enemy’s deck if his Allegiance hits.

Dreadway Deckhand is a typical two-cost 2/2 unit. But she stands out from the crowd thanks to her ability that summons a Powder Keg when she is summoned. Powder Kegs have the ability to stack upon one another, becoming a threat quite quickly. But they also have Vulnerable, so it’s best not to let them sit on the bench for too long. In conjunction with the spell More Power, cast on turn three, Dreadway Deckhand is a solid two-drop in any Aggro and Burn deck.

Five-cost units need to provide value beyond power and defense, which Slippery Waverider does. It’s a 4/4 Elusive unit that also refills one spell mana with Attune when summoned. Slippery Waverider is a solid follower to include at just an Elusive 4/4 for five mana. But it also increases your spell mana by one, at a pivotal moment like turn five, making it an ideal unit to include in a variety of LoR archetypes.

Citrus Courier is a six-cost 4/5 unit that does more than just stockpile oranges for Gangplank. This Bilgewater follower heals all allies and your Nexus for three while also prompting Rally when he is summoned after damage has been dealt to an opponent’s Nexus that turn via Plunder. Turns five and six are typically pivotal when playing a Midrange build and Citrus Courier provides the advantage you need heading into the latter part of a match.

Jinx players can rejoice at the addition of Brash Gambler, a solid four-cost unit with 4/5 stats. To play her, you must discard two cards, which is easy enough to accomplish in a Discard archetype. And when Brash Gambler attacks, you get to draw two Fleeting cards. She dumps what you don’t need while fueling the Discard theme and provides advantage via card draw when she attacks. The only downside to Brash Gambler is that she might not thrive outside the Discard archetype.

Using spells and spell mana is an integral component towards winning a match, no matter the archetype. And Coral Creatures is a two-cost 1/2 unit that can help exploit spell strategies. Upon summoning, Coral Creatures refills your spell mana by one and creates a random one-cost spell in hand. You can then cast the one-cost spell that turn, or bank the mana and spell for a future turn. Either way, don’t underestimate the advantage Coral Creatures provides, especially in archetypes that rely heavily upon spells.

Zap Sprayfin has the potential to become the next Shadow Assassin. She may cost four mana, one more than the Elusive assassin, but her card draw isn’t as random. Zap Sprayfin is a 2/2 Elusive who not only has Attune, making up for that additional mana cost,, but also summons a spell from your deck that has a mana cost of three or less. In any spell heavy archetype, Zap is a must include.

A six-cost unit at 6/5 is fairly decent. Sheriff Lariette Rose is more than just a large six-drop, though, pinging all enemies with Vulnerable when she’s summoned. Six-drop units that saw a good amount of play in the LoR open beta included Cithria the Bold, Minotaur Reckoner, and They Who Endure; all because they offered something beyond their stat line. Sheriff Lariette Rose will likely join this elite crew in the upcoming LoR meta, destroying an opponent’s strategies and board state.