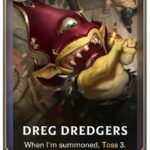 Riot has taken self-mill strategies in Legends of Runeterra to a whole new level with Deep, a new keyword, along with three followers and a new spell to support Nautilus.

The hype leading up to the release of Rising Tides continued tonight with the reveal of Nautilus as a new champion in the Bilgewater region. Included with the LoR champion spoiler were Dreg Dredgers, The Beast Below, Shipwreck Hoarder, and Salvage to support the keyword mechanics Toss and Deep.

Deep is a new LoR keyword that adds +3/+3 to a unit when a player’s deck has 15 or fewer cards. Milling down to 15 or fewer cards requires the Toss mechanic, which was first revealed with the Maokai spoilers.

The second LoR follower revealed tonight was The Beast Below, a four-drop 4/4 with Deep. A 4/4 for four is always a solid card, but with Deep, this four-drop can easily become a 7/7 during the late game.

Shipwreck Hoarder also has the keyword Deep and is a seven-drop 7/5 with two additional abilities. When it’s summoned, Shipwreck Hoarder will Toss two and shuffle two Treasures into its controller’s deck.

Treasures are generated spells: Treasure Trove, Keelbreaker, and Platewyrm Egg. Upon first glance, all three Treasure spells seem incredibly powerful. But players shouldn’t overlook the fact that they are Slow spells, meaning they take up a turn and can be countered with Deny. Each Treasure spell is drawn when Tossed.

Treasure Trove creates five random cards in hand that are Fleeting and have no casting cost. Keelbreaker deals five damage to all units, and Platewyrm Egg summons three Vicous Platewyrms. The Platewyrm sea monster is a five-drop 5/5 that has Fearsome and Deep.

The final card revealed tonight was Salvage, a four-cost spell that has Burst. Salvage will Toss two and draw two when it is played. Card draw is great in any card deck, but it’s exceptional in a self-mill build. And it occurs at Burst speed as an added bonus.

Players can begin crafting self-mill builds when Rising Tides arrives within LoR on April 28 via PC and by April 30 for mobile.