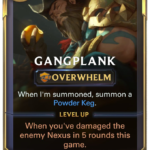 Legends of Runeterra’s card reveal season continues to set sail during the weekend for Bilgewater.

The Saltwater Scourge is the next champion that Riot Games has revealed in today’s teasers. He’s a five-cost champion unit with five power and five health with Overwhelm. When he is summoned, he also summons a Powder Keg. He reaches his leveled-up form when you’ve dealt damage to the enemy nexus five times during different rounds.

Gangplank’s leveled-up form is also five-cost and gains +1/+1 in stats while retaining his Overwhelm keyword and summons Powder Kegs at the start of each round. He gains an attack effect that deals one damage to all enemy units alongside the enemy Nexus.

Gangplank’s main appeal are the Powder Kegs, which effectively increases your spell damage and can lead to interesting combos since you can have multiples on the field. Some factions that Gangplank can synergize with are Sejuani, since their level-up conditions are very similar, or Noxus, since Swain-based decks are looking to deal effect damage repeatedly.

Gangplank will join the champion roster when LoR is officially released for PC and mobile on April 30.