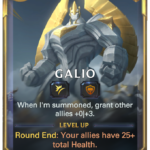 Toughness matters in Legends of Runeterra via Galio and his Demacia region support cards in the upcoming A Curious Journey expansion.

The upcoming LoR expansion, A Curious Journey, contains the new keyword Formidable, a mechanic that allows units and champions with large health stats to attack as if their toughness was their power. And Galio, revealed today by Riot Games, is a zero power champion who can Rally upon leveling up.

Level one Galio is a seven-drop 0/8 LoR champion with Spellshield and the new keyword Formidable. The new Demacian champion also grants other allies +0/+3 when summoned.

Galio levels up when your allies have 25 or more total health at round end. Upon leveling up, he has Spellshield, grants allies +0/+3 upon getting summoned, and has the LoR mechanic Rally the first time an ally takes damage each round. His spell is Galio’s Shield of Durand. It’s a Burst speed spell that grants an ally +0/+3 and, at the next round’s start, grants the same ally +0/+2

The Galio spell Shield of Durand is a huge upgrade for the LoR champion Fiora, giving her the health she needs to end games. It also provides the health needed for Galio and his support cards to continue popping off after taking damage.

Supporting Galio and the toughness matters build, Gorlith the Unscalable is a nine-drop 0/10 that heals your Nexus for 10 upon getting summoned and can’t be blocked by enemies with health less than Gorlith the Unscalable. The new Demacian archetype is also supported by the spell Winds of War, a three-drop Slow speed spell that heals an ally to full. It also has the ally and enemy strike each other.

Fearsome builds are a huge downside to Galio and his Formidable archetype, preventing you from blocking cheap creatures that can swarm the battlefield quickly (Spiders). The Noxus spell Culling Strike can also take out any unit with three or less power at Fast speed.

Players can test out Galio and the toughness matters LoR build with the release of A Curious Journey on Feb. 16.