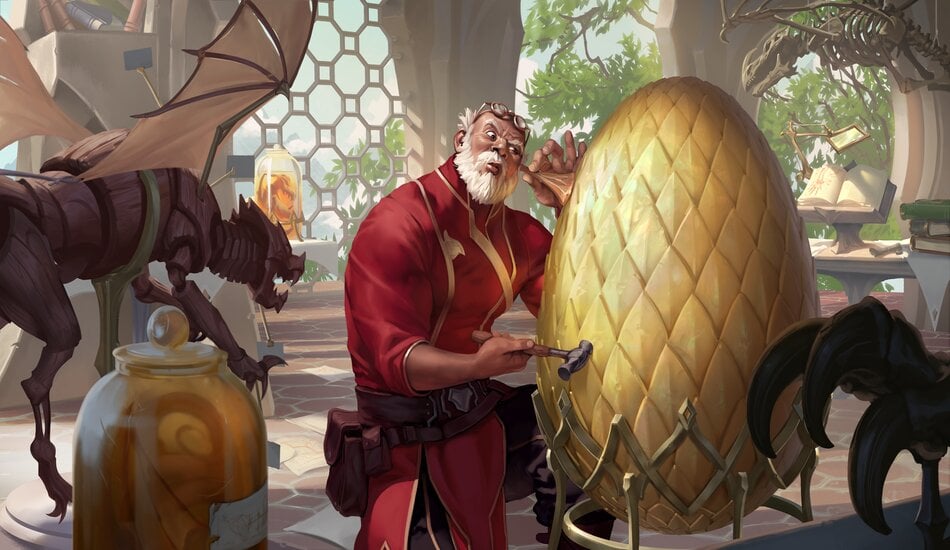 A total of five Legends of Runeterra Demacia cards and one Noxus spell were revealed today by Riot Games for the upcoming Monuments of Power expansion.

Riot unveiled the final Landmark card in MoP, Noxkraya Arena. Scheduled to launch on Oct. 14, the new expansion will add 40 cards to the Call of the Mountain set. Six other support cards were also spoiled today in conjunction with Noxkraya Arena, featuring a mix of spells and followers.

Other than Noxkraya Arena, the only other Noxus card spoiled today was Scorched Earth. It’s a three-drop removal at Fast speed that will kill a damaged unit or destroy a Landmark. Scorched Earth is a solid removal card that every Noxus player should have at least one copy in a deck, especially at the launch of MoP.

The other five cards revealed were all Demacia support: Stony Suppressor, Sharpsight, Stalking Brooodmother, Dragonguard Lieutenant, and Egghead Researcher. The latter three are all Dragon-themed cards, with Egghead Researcher likely the best. Able to provide blocking against early attackers with 1/3 stats, the researcher also creates a random Dragon follower in hand when summoned, setting up a dangerous curve.

Sharpsight is a two-drop Burst spell that pumps a unit +2/+2 while also allowing that pumped unit to block Elusive attackers. The Burst speed spell is great against Elusive aggro builds, shutting down key attackers at a low cost of just two spell mana.

But the most powerful shutdown card revealed today was Stony Suppressor, a two-drop Demacia region follower who increases the cost of all spells by one mana when on the battlefield. Her powerful static ability applies to everyone but slots nicely into a unit-focused Aggro and Midrange builds while punishing Control decks that rely heavily upon spells for stalling until their build comes online. Stony Suppressor also has a defense of three, making it slightly harder to remove her from the battlefield.

Test out all the MoP spoilers from today when the set drops on Oct. 14.