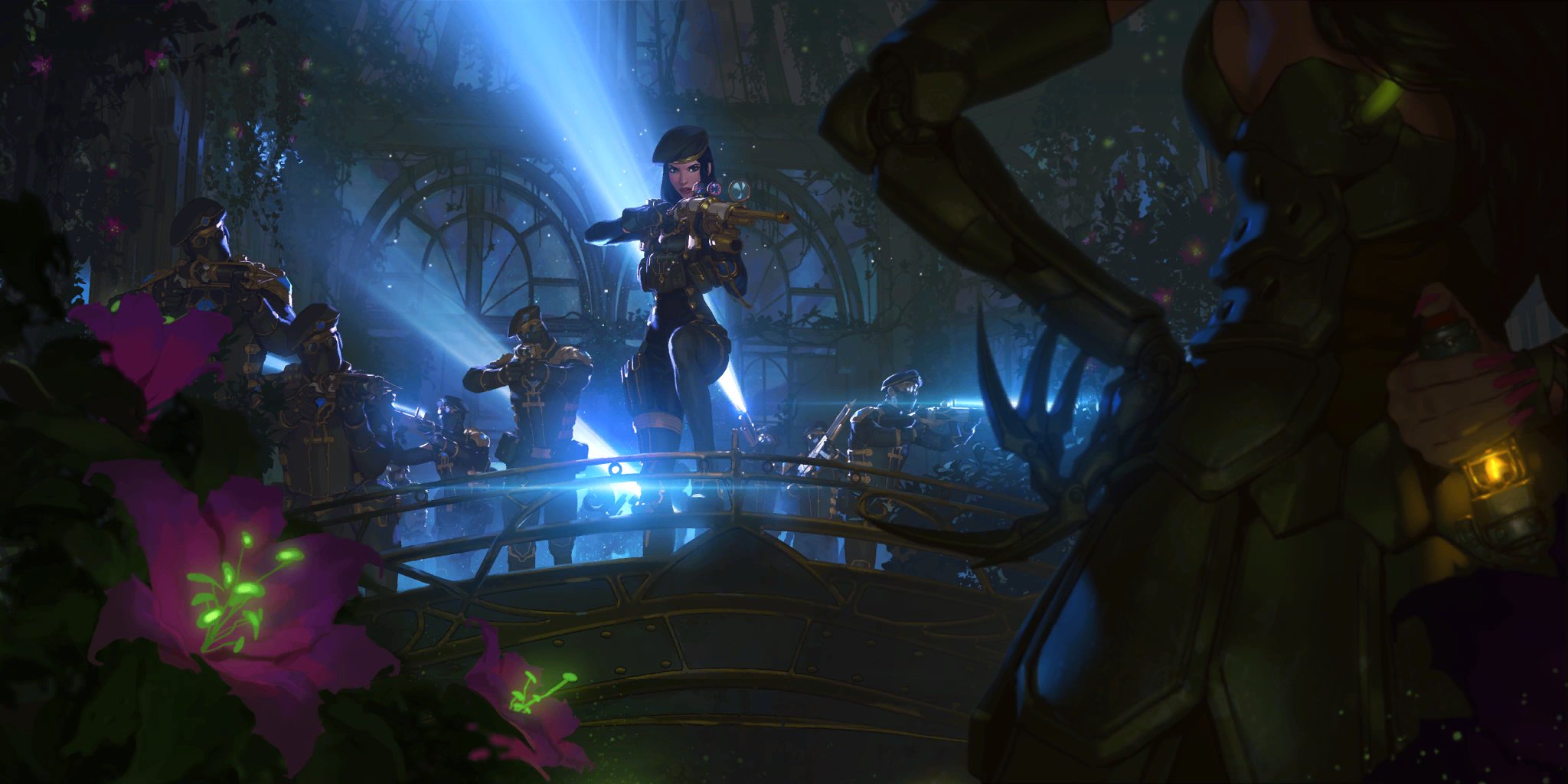 The second champion joining Legends of Runeterra’s upcoming set, Beyond the Bandlewood, has been unveiled. Caitlyn and 11 other collectible cards, all from Piltover and Zaun, were shown off today by Riot Games.

As successfully theorized in the past with Ava Achiever’s wording, Caitlyn is bringing an entirely new trap to the game called Flashbomb Traps. As opposed to Poison Puffcaps, which were in LoR since its release and focus on burning the enemy Nexus, these new Flashbombs deal damage to enemy units, aiding in board control. 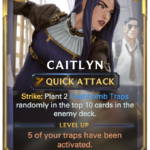 Caitlyn is a three-mana champion from Piltover and Zaun with 3/3 combat stats Quick Attack keyword and an ability that plants the new Flashbomb Trap in the opposing deck. Whenever Caitlyn successfully strikes, she plants two of the new traps randomly within the top 10 cards of the opposing deck. Caitlyn levels up after five of your traps have been activated.

Once Caitlyn becomes level two, she gains +1/+1 in combat stats and upgrades her strike ability. She’ll then plant four Flashbomb Traps randomly within the top 10 cards as opposed to two and deal extra damage to the enemy Nexus equal to the amount of traps activated this round.

This is the first time that a Piltover and Zaun champion has been in the first expansion of three since LoR sets were divided into triple releases. Introducing the second iteration of a trap in the game, Caitlyn is an offensive threat that can quickly make the opponent second guess playing any units since the Flashbomb can quickly whittle away the enemy board.

While Caitlyn and her set of followers and support bring a lot of new traps, there’s a chance the Sheriff of Piltover could appreciate all of the original and new cards that plant Puffcaps within the opposing deck. This is due to the fact that Caitlyn’s level-up requirement needs any trap to detonate as opposed to the specific Flashbombs.

Once Caitlyn successfully reaches level two, the amount of burn damage she can provide is ridiculous, especially if the enemy’s deck is filled with Flashbombs and Puffcaps. One benefit to leveling up Caitlyn is that she doesn’t need to be on the board to see the traps activate, so you can save her for later if you don’t want her to be removed.

While Caitlyn reaches her full potential when attacking, her strike ability can be used defensively as well, which can allow you to help plant more Flashbomb Traps or deal burn damage if she’s level two. 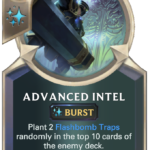 Piltover Peacemaker, in addition to being Caitlyn’s champion spell, is a common three-mana fast spell that deals two damage to an enemy and plants two Flashbomb Traps randomly in the top 10 cards of the enemy deck.

Justice Rider is an epic four-mana unit with 3/4 stats and an effect that triggers whenever your opponent draws a card, planting a single Flashbomb Trap within the top 10 cards of the enemy deck.

Officer Squad is a rare two-mana unit with a 4/5 stat line and a summon ability that creates a “Most Wanted” in hand. Aside from being created by Officer Squad, Most Wanted is an epic five-mana slow spell that has you pick a player to discard their lowest cost card in hand, drawing three cards afterward.

Station Archivist is a rare three-mana unit with 3/3 combat stats and a Play ability that lets you pick a spell within the top five cards of your deck to create an exact copy in your hand with Fleeting.

Sting Officer is a common two-mana Elusive unit with 2/1 stats and a Nexus Strike ability that plants two Flashbomb Traps randomly within the top 10 cards of the enemy deck.

Ambush is a two-mana common burst spell that gives a unit +2/+0 boost for the round. If you’ve added two cards to your hand this round, it gains the Elusive keyword for the round as well.

Coup De Grace is a rare five-mana fast spell that places an enemy follower into the enemy deck. Your opponent then draws one card.

Advanced Intel is a common one-mana burst spell that plants two Flashbomb Traps randomly in the top 10 cards of the opposing deck. Finally, Insider Knowledge is a common three-mana fast spell that has both players draw two cards.

Every new Flashbomb support shuffles cards within the top 10 cards (and the newest iteration of Corina amplifies that up to five), meaning you can expect them to explode fairly soon after planting them.

While Piltover Peacemaker provides low unit damage for its cost compared to other removal spells, it can allow you to deal more potential damage if the opponent draws into the Flashbombs at opportune times. In addition, planting more Flashbomb Traps in the opposing deck gives you better odds at helping your Caitlyn level up.

Out of this set of followers, Sting Officer shows the most promise since he’s a two-mana 2/1 Elusive unit and can snowball out of control if he’s allowed to consistently attack the enemy Nexus. While Justice Rider’s stat line is below average, she can quickly stack Flashbombs within the opposing deck due to being able to shuffle a new trap each time the opponent draws cards.

There are also cards within this reveal batch that force the opponent to draw cards, like Coup De Grace, Insider Knowledge, and Most Wanted. While having your opponent draw cards can be a large detriment, especially against aggressive lists, this ability becomes beneficial when there’s an excessive amount of traps within the opposing deck.

Out of those three cards, Most Wanted has interesting purposes since it can help you cycle through your deck quickly because you’re essentially spending two cards to draw three, which is a net gain of one card in hand. While giving yourself value can be a fair use of Most Wanted, you can force your opponent to stumble into traps that lay within their deck.

Station Archivist and Ambush are cards separate from the Flashbomb archetype but can provide interesting value and aggressive opportunities, respectively. With the Archivist, being able to play the spell you create with her in the same turn allows you to keep card advantage while developing the board.

Despite this strength, one downside to consider when playing Station Archivist is that she gives your opponent information of what card will be coming within your future draws. Ambush is a potent tool for aggressive decks due to its ability to deal two damage while giving a strong unit the Elusive keyword. The major weakness of Ambush is that if your deck doesn’t have ways to create or draw cards, then gaining the Elusive benefit is unlikely.

Corina, Mastermind gives you a chance to either deploy more traps or preemptively activate your traps that help with burn (Puffcaps) or board control (Flashbombs).

Coup De Grace provides Piltover and Zaun with the ability to effectively remove large singular followers from an opponent at fast speed. While your opponent won’t lose value since they draw a card immediately after, they’ll lose tempo and board control because replaying that valuable unit can be incredibly difficult.

Overall, Caitlyn shows a ton of promise in either existing Puffcap paired with Freljord decks or in a new Bandle City/Piltover and Zaun list thanks to all of the trap synergies that are being added in Beyond the Bandlewood.

Caitlyn will join the Piltover and Zaun champion roster when LoR: Beyond the Bandlewood is released on Aug. 25.