The release of Rising Tides in Legends of Runeterra contains a number of captivating images that deserve recognition.

Riot Games, in conjunction with SIXMOREVODKA and other production companies, have brought to life League lore within LoR and the Rising Tides expansion. Capturing the essense of champions from LoL, and their followers, remains one of the many reasons players are enjoying Riot’s new digital card game.

From sea monsters roaming the depths outside Bilgewater to the Winter’s Claw tribe in Freljord, here are the 10 best works of art from the LoR Rising Tides expansion.

Plunder Poro is an ideal representation of the Bilgewater region: adorable on the outside and deadly within. Illustrated by William Gist, Valentin Gloaguen, and Chris Kintner, Plunder Poro is the very essence of the Rising Tides expansion.

Flavor text by Gangplank: “His picture’s been on the Bounty Board longer’n most, for he’s a greedy, ruthless devil that won’t let anyone or anything stand in his way. Worst of all? He’s… He’s cute, damn it.”

Children of the Winter Claw only know war, and Ember Maiden showcases just how badass these warriors are. Illustrated by Michal Ivan, Ember Maiden doesn’t mind getting singed while she burns it all down.

Flavor text from a Winter’s Claw children’s rhyme: “They will till their fruitful fields, They will weakly sow their seeds. We will set ‘most all aflame, Winter’s Claw takes what it please!” 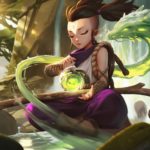 Swain is the Noxian grand general, who shares his body with that of a demon. He welcomes all who pledge allegiance to Noxus and destroys those who won’t. Illustrated by Hugo Lam and Michal Ivan, the general’s flavor text states: “No sacrifice is too great to see my vision for Noxus fulfilled.”

Anything can be found in Bilgewater—for the right price. Black Market Merchant is a favorite amongst many players, and not just because he draws an extra card from an opponent’s deck upon Plunder. Illustrated by William Bao, Alessandro Poli, Monika Palosz, and Valentin Gloaguen, Black Market Merchant represents the swindlers and proprietors of Bilgewater.

Flavor text: “If you want it, I’ve got it! Even got some ‘special stock’. Just remember, you didn’t get it from me!”

Grizzled Ranger and his Loyal Badgerbear companion have taken over the LoR meta via the Demacian region. Illustrated by João David Fernandes, Michal Ivan, and Claudiu-Antoniu Magherusan, the infamous duo was formed into LoR cards because the design team fell in love with the sketch work.

Flavor text from Loyal Badgerbear: “It’s true what they say—pets look like their owners.”

Riptide Rex is beyond obnoxious in design and functionality, which is exactly why it ranks in the top-five. Illustrated by Mar Studio, Riptide Rex has a total of seven cannons strapped to his back. And he’s not afraid to use them.

Flavor text from “Home with you Sally” song: “Sail past the sailors, sail past the wreck, The battle’s already over. The smoke’s cleared the water, their captain’s met Rex, And their ship’s ripped an’ torn timber.

It’s only fitting the one champion within League lore who uses playing cards as a weapon would get added to LoR. But that’s not why he makes the top three. Twisted Fate’s artwork and animations within the game are captivating and full of detail. The artist behind his artwork includes Gerald Parel, Maki Planas Mata, Alessandro Poli, and Valentin Gloaguen.

Flavor text: “It ain’t gamblin’ if you can’t lose.”

Juall Hunters is a staple card within the Bilgewater Deep builds and in meme decks that like to take an opponent by surprise. Illustrated by Hugo Lam, Monika Palosz, and Gerald Parel—these sea monster hunters will chase after anything worth a coin.

Flavor text: “The lure of fortune pulls countless crews out beyond the shallows. Those poor souls soon discover how terrifying the waters can be, and why so few return.”

A transformation of Ursine Spiritwalker, Stormclaw Ursine remains the most talked-about work of art within the LoR Rising Tides expansion. Upon its preview, release prior to launch, players were astounded by Stormclaw’s extra set of human teeth to his sheer presence of power. Stormclaw Ursine was illustrated by Kudos Productions.

Flavor text: “Fully unleashed, the Ursine shed their humanity and take on the power of the storm. They tear across the frozen steppes, their roars echoing like peals of thunder.”