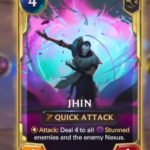 Riot Games revealed a total of 22 Legends of Runeterra cards today during the Worldwalker expansion Livestream from all different regions.

Scheduled to release on May 25 via Patch 3.8 is the newest LoR expansion, Worldwalker. Included in the expansion are four new champions without a specific region, breaking the region rules established in the digital card game. There are a total of 65 new cards within the Worldwalker expansion, including new characters that haven’t been established in the League of Legends lore, like The Maker.

In conjunction with the 22 Worldwalker spoilers, Riot also released a new cinematic trailer for Jhin and The Maker.

Starting with the release of the Worldwalker expansion, the LoR team plans to continue to support existing archetypes within the digital card game, according to game designer Steve Rubin. One of these types of supporting cards revealed during the Livestream was The Winding Light.

Supporting the Targon region and the Nightfall archetype, The Winding Light is a 6/5 seven-drop with Overwhelm. Upon entering the battlefield via Nightfall (not the first card played that turn) the Targon creature gives all allies +2/+1 and Overwhelm for that round.

Dragons are another archetype getting support within the Worldwalker expansion via Protective Broodfather. The mother, Stalking Broodmother, has Fury and Scout, able to scale in power and attack multiple times.

The Shurima region will get support via Chamber of Renewal, a new LoR Landmark that destroys itself when you summon a champion.

Upon its destruction, it grants that champion +2/+1 in stats and the keyword Spellshield. This is an exceptionally powerful Landmark in conjunction with Taliyah, who summons an exact copy of a Landmark upon getting played, essentially doubling her bonus stats.

And to top off the archetype support, the Lurk archetype now has access to Rally via Blood in the Water.

The five-drop Bilgewater LoR spell deals one to anything and then has Rally. In an archetype like Lurk, where creatures scale in power each time they attack, Blood in the Water is a solid spell to finish an opponent off.