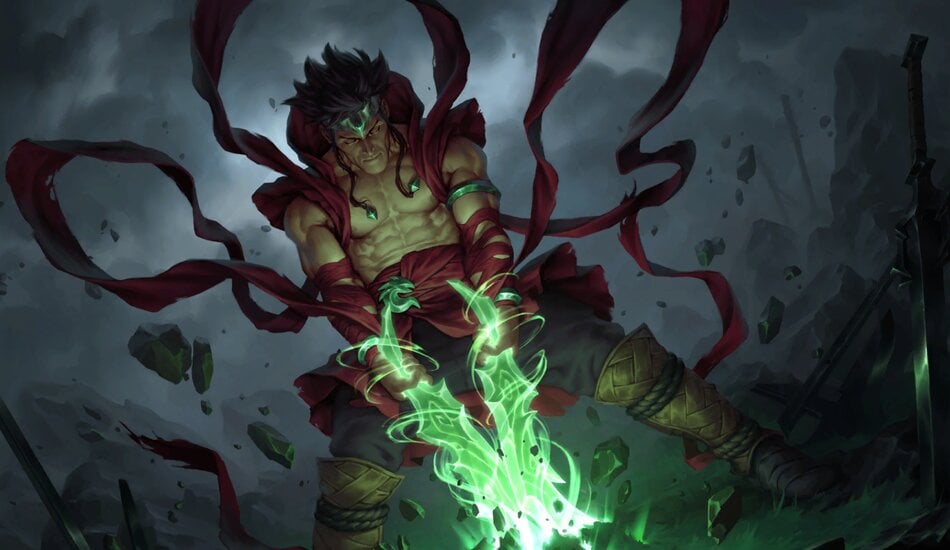 Climbing to Master rank in Legends of Runeterra for the second time, Matthew “AlanzqTFT” created a 48/48 Emerald Awakener during his stream today.

Control decks within LoR are gaining traction daily, from Spooky Karma to Ezreal Elnuk. Creator of the ever-popular Warmother Control deck, AlanzqTFT, popped off a 48/48 Emerald Awakener during a match playing his Karma and Lux deck.

Having already leveled up Karma, she produced two copies of Redoubled Valor when cast upon the Emerald Awakener. The result was a 48/48 unit with lifesteal and a “GG” from AlanzqTFT’s opponent a couple turns later.

Emerald Awakener is a key card in the deck, providing lifesteal throughout a match until Karma or Lux levels up to finish off an opponent. The only other unit in the deck is Shadow Assasin, for card draw. There are three copies of Karma and Lux, and AlanzqTFT also has three copies of the spell Remembrance to produce extra units when necessary.

A member of Team Liquid, AlanzqTFT already hit Master once in LoR. And he’s already nearly achieved it a second time, running a Karma and Lux deck that had a win/loss ratio of 131-45 at time of the above clip. Ranked first in the EU, AlanzqTFT was signed by Team Liquid last fall due to his top-ranked standings in Teamfight Tactics.

Hardly a stranger to competitive esports, AlanzqTFT qualified for ESWC in Dota 1 when he was around 16 years old. He’s ranked first in TFT and competed in CCG games like Hearthstone and Artifact. And now the Team Liquid streamer is dominating in LoR, creating unique and powerful decks that are becoming standard within the current meta.

Update Feb. 26 1:30pm CT: AlanzqTFT achieved Master rank for the second time in NA, playing his updated version of Karma/Lux. A few tweaks were made to the deck, compensating for the ever-changing LoR meta. Upon completion, it had a record of 180-77.