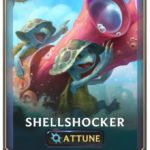 Not every card within a new set needs to be overpowered or flashy; some are meant to support rather than show off. Today’s LoR spoilers are an ideal example of such a theme, revealing three weak-stated followers with a potentially game-changing keyword mechanic.

Attune is a “subtle keyword,” the LoR team told Dot Esports. It’s meant to help pay for the cost of cheap spells via extra spell mana. Refilling one spell mana can have a major impact on the meta, as was seen during the LoR open beta when Deny went from a cost of three spell mana to four.

The new followers revealed today Shell Shocker, Coral Creatures, and Bubble Bear are equipped with Attune and have a low casting cost to boot. On the battlefield they may not be worth much, serving more or less as chump blockers. Their true power comes with Attune and other equipped abilities.

Shell Shocker is a simple 2/1 one-drop and holds little value outside of being played on turn one. But Coral Creatures packs some additional heat, creating a random one-cost spell when summoned.

And don’t overlook the value of Bubble Bear due to its adorable nature, since it has Elusive with a defense of six. Much like Braum, Bubble Bear has the potential to wreak havoc when pumped with Take Heart after it’s been dealt damage.

Fans can start crafting and experimenting with the new Bilgewater cards and the Attune mechanic when LoR officially launches via PC and mobile on April 30.