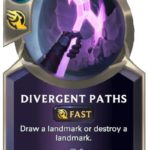 The release of the Monuments of Power expansion within Legends of Runeterra includes five new spells players should be taking advantage of.

Having launched today, the new MoP expansion contains a total of 40 cards. Three new champions have been added to the Demacia, Targon, and Bilgewater regions and will likely shake up the meta, along with Landmark cards. To deal with these new threats, there are five MoP spells players should consider playing.

The impact Landmark cards will have on the overall meta is unknown for now. Due to their unique and powerful abilities, though, Divergent Paths provides players the opportunity to either draw a Landmark or destroy one. With a reasonable cost of three mana at Fast speed, builds running a Landmark or playing against Landmark decks, should include at least two copies of Divergent Paths.

Sharpsight is an all-around solid two-cost Demacia spell that can deal with pesky Elusives while pumping up an ally’s stats +2/+2. Running three copies is extreme, but any build utilizing Demacia as a region should consider at least one or two copies of Sharpsight. At Burst speed, Sharpsight is a solid combat trick worth including in just about any Demacia build.

Granting enemies Vulnerable is often overlooked as an aggressive strategy. Only costing one mana to cast, Shakedown deals two to an ally and grants two enemies Vulnerable. This is extremely useful when attacking for lethal, moving powerful blockers out of the way. Shakedown can also help stabilize the board state, forcing an opponent to block with creatures that will die to your attackers.

Nopeify is not a replacement for Deny. Players should consider running both spells, though, up to three copies total between the two. Both spells are found within the Ionia region. Deny is a much better spell but costs four mana to cast. Nopeify is slightly limited in what it can stop but is two mana cheaper to cast than Deny. Ionia decks should consider running either one Deny and two Nopeify, or two Deny and one Nopeify. And for builds going up against Ionia, be prepared to see both of these counterspells getting played.

Shadow Isles builds love to kill allies to gain an advantage, which is why Crumble may overtake Vengeance. At a cost of two less mana, Crumble kills any unit or destroys a Landmark by killing an ally. Vengeance only kills units. The major difference between the two spells, however, is that Crumble is Slow while Vengeance is Fast speed. Much like Deny and Nopeify, Shadow Isles players should consider running both LoR spells, with no more than three copies total in a single build.