The reveal season for Legends of Runeterra’s next expansion, Guardians of the Ancient, has started off in Shurima.

Riot, in collaboration with Mobalytics, revealed four new cards from Shurima today: Preservationist, Time In A Bottle, Imagined Possibilities, and The Clock Hand 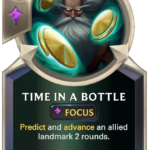 Preservationist is a Rare five-mana unit with 4/4 combat stats and a Play ability that advances an allied Landmark three rounds forward.

Time In A Bottle is a Common two-mana Focus speed spell that predicts and advances an allied Landmark two rounds.

Imagined Possibilities is a Rare one-mana Focus speed spell that gives you two choices to pick from to activate. Its first function lets you either create a random Landmark with Countdown in hand and its second function advances all of your Landmarks forward one round.

The Clock Hand is an Epic eight-mana 4/7 unit with a summon ability that creates two “Instant Century” spells in your hand. The exclusive spell is a zero-mana Focus speed that allows you to make a choice to either summon a random Landmark with Countdown or advance a landmark forward four rounds.

While judging these cards is a bit tough until the full Countdown-based Landmarks are revealed in this expansion, it’s fair to evaluate the pool that’s in the game.

Here is every card with Countdown, the amount of time needed to be spent, and the effect:

Both Preservationist and The Clock Hand have terrible stats for their mana cost, so their abilities need to do some game-breaking stuff to find potential viability. As it stands, until we know the exact roster of Countdown Landmarks, their effects can’t be fully judged.

With Time In A Bottle, it’s unknown if you can activate it without a Landmark on board to use the predict feature in a pinch. But being able to activate your Countdown sooner can be a powerful effect, especially if it lands on Salt Spire or a potential upcoming Landmark.

It’ll be tough for the cards that create random Countdown Landmarks to find consistency since there will most likely be more than nine Landmarks. This means trying to find a specific Landmark will be incredibly difficult and there’s a chance to whiff if you find a Buried Sun Disc when you’re not trying to Ascend your champions.

With all of these Shurima and time-related cards being revealed, Zilean is expected to be shown off tomorrow.

You can try out these cards and more when LoR: Guardians of the Ancient drops May 6.