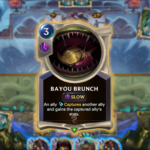 Bayou Brunch is a common three-mana slow spell that lets one ally unit capture another allied unit, allowing the first ally to gain the stats of the captured ally. Wisefry is an epic six-mana 3/8 unit that has Overwhelm, Vulnerable, and a Play effect that deals one damage to all ally units and grants him one extra power for each allied unit that takes damage. Shakedown is a rare one-mana burst spell that deals two damage to an ally to grant two enemy units Vulnerable.

Bayou Brunch helps the recently revealed Tahm Kench by giving him a safer way to capture ally units. Aside from serving as potential healing for the Kench, Bayou Brunch can provide opportunities to have summon effects activate multiple times.

Wisefry is a potent unit that can help serve the self-damage theme found in Noxus. Wisefry allows for even more ways to help consistently level up Vladimir while providing powerful burst damage during combat.

Shakedown is a potent combat trick that lets you find surprise lethal opportunities at the cost of damaging a minion. When your opponent has chump blockers or high priority minions, you can set up favorable trades fairly easily with the Vulnerable that’s granted to enemies.

Indulge in the greater delicacies with these Tahm Kench based cards when LoR: Monuments of Power officially drops for PC and mobile on Oct. 14.