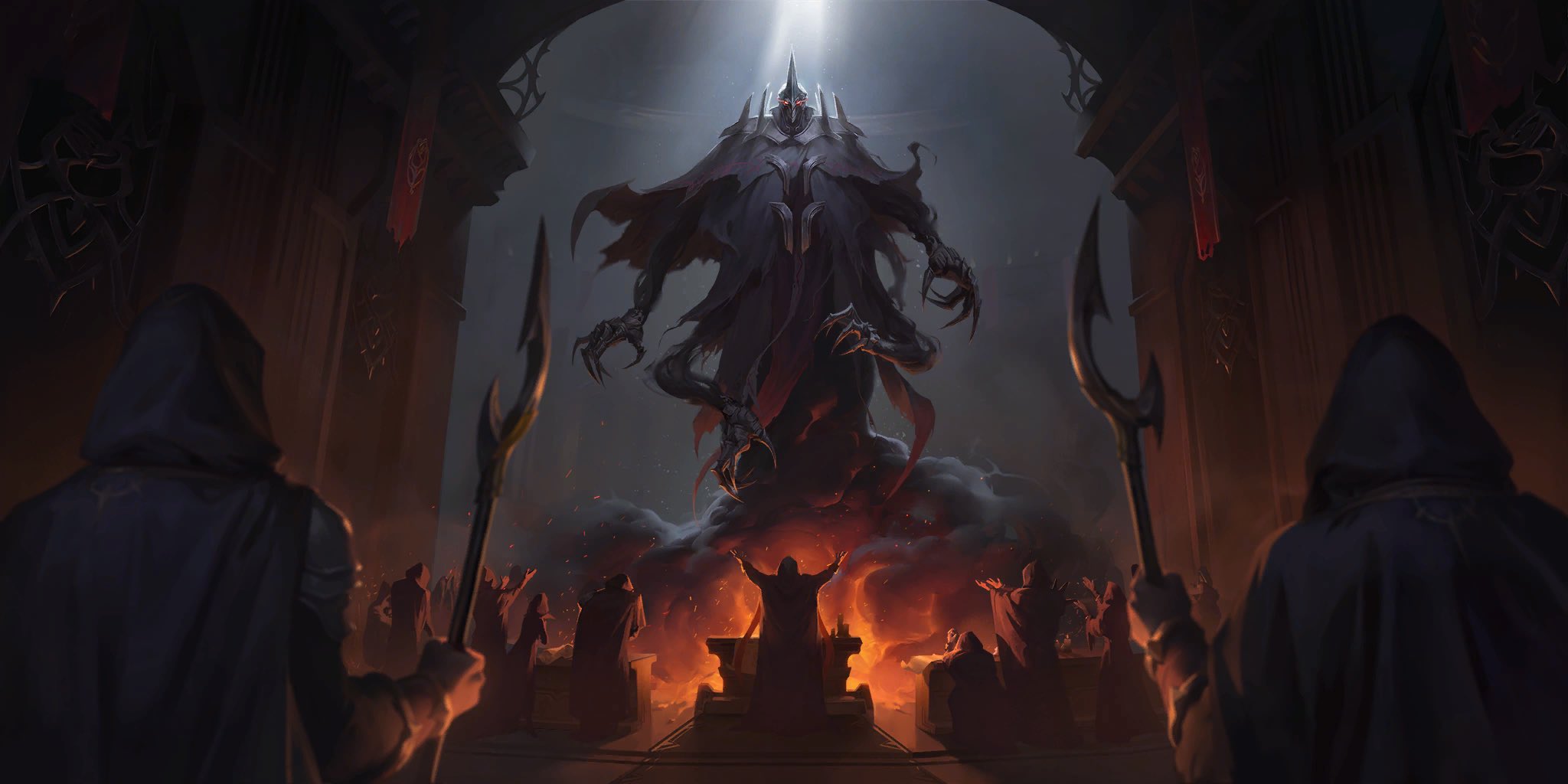 The reveal season for Legends of Runeterra: Rise of the Underworld continued today by showing off the non-featured regions in this expansion’s release cycle. 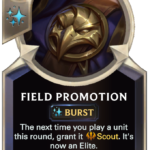 Field Promotion is a common two-mana Burst spell from Demacia that gives the next ally you play within the same round the Scout keyword and the Elite Tribal tag. Fabled Poro is a rare four-mana Poro unit from Freljord with a 2/5 stat line and a summon ability that grants all allied Poros a random keyword.

Abominable Guardian is an epic eight-mana Yeti unit from Freljord with a 5/5 stat line and an ability that summons herself from hand and creates a copy of her in the deck at round start if you control two or more Yetis. If you play her naturally, she has an effect that draws a Yeti from your deck.

Atakhan’ Bringer of Ruin is an epic 10-mana unit from Noxus with a 5/12 stat line with the Overwhelm keyword and an ability that activates when he attacks that increases his power by the total strength of all allies you control. Thorned Blade is a common four-mana Burst speed spell that temporarily gives an allied unit +5/+0 for the round.

Astral Fox is a common four-mana unit from Shadow Isles with a 3/3 stat line and a skill that activates when played that kills an ally to deal three damage to the enemy Nexus. Finally, The Twisted Treeline is a three-mana epic Landmark from the Shadow Isles that destroys itself once it has seen three Fearsome allies declare an attack to summon Vilemaw. As a reminder, Vilemaw is a 6/6 unit with the Fearsome.

Field Promotion is an interesting card that can give one unit of your choice one of the most powerful keywords in the game, Scout. While the Elite tag portion of the spell is interesting, it’s unknown if the order allows it to benefit from cards like Battlesmith or Ardent Tracker.

Fabled Poro is an interesting payoff for Poro-style decks that can give a wide board of Poros some potent keywords. One important consideration when evaluating this card is that Fabled Poro does grant itself a random keyword.

Defiant Dance provides more ways for Azir and Irelia-styled decks to reuse their powerful play abilities cards by recalling them. While most spells that target allies interrupt the card if the selected unit is destroyed, Defiant Dance should always cast and provide a singular Blade Dance due to the wording.

Heavens Align is a peculiar module card that can give you a Nightfall card for the same turn or a Daybreak card to use in a future round. Despite the random nature of this Focus speed spell, there are interesting applications for it. You can generate two cards for one if Rahvun is on the board, similar to Eclipse Dragon activating both abilities.

In addition, since Focus is essentially Burst speed on your rounds, you can trigger Leona’s leveled-up ability during an open attack. While this does sound like a neat fringe application, an opponent can still technically react and have the strongest unit block and serve as a “blocker” despite being removed from combat. Despite all this, since the cards provided are randomly determined, it’s unlikely that this card will find success.

Starlit Epiphany, while looking like a meme under most circumstances, could find fringe use as a tech card against decks that focus on milling you, like Lissandra’s Watchers (which has a favorable matchup against Dragons) or Deep’s Maokai. While this application is powerful under these circumstances, the ability to refuel your deck after being Obliterated still may not be strong enough to warrant this card being played since filling your deck with Behold the Infinites is a meager play.

Atakhan, Bringer of Ruin is Noxus’ first 100cost unit and provides an interesting finisher for fans of the aggressive region. While Noxus isn’t known to reach that stage of the game that often, the set of keywords and abilities can give midrange-styled decks a way to end the match if he’s left unanswered.

Similar to Fabled Poro, Atakhan does count himself when swinging with his power-boosting ability, meaning the Bringer of Ruined can reach ridiculous power totals, which is dangerous when combined with Overwhelm.

While Thorned Blade can provide a surprising amount of burst damage for four mana, it also gives players a chance to trigger Reputation due to the critical five-power breakpoint.

Astral Fox is another tool for Fearsome Aggro decks to use due to the burn damage it can provide with its skill and the ability to forcibly activate any Last Breath triggers on your own units.

The Twisted Treeline is a reference to League of Legends’ old three-vs-three map and is the second way to summon Vilemaw in LoR. Even if it’s another three-mana method to summon Vilemaw, your opponent can find ways to interact with your Fearsome units, which will make completing the summon much more difficult.

Out of all the cards revealed today, Abominable Guardian is the most unique one on this list. While cheating out a 5/5 unit can be intriguing for midrange decks, the eight-mana Yeti does have a play ability that can provide extra fuel for fans of the limited tribe.

Since today’s teasers featured the non-highlighted regions, it’s unknown if the reveal season will head to Bilgewater for Pyke or Piltover and Zaun for Ekko.