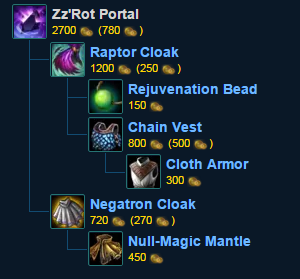 In the past few weeks, I have been telling my friend @LeviathanLoL about the viability of the Zz’rot portal, and it has since started to sprout in both pro games, and high elo dynamic queue.
The first competitive match I saw with Zz’rot Portal was the 2nd match between the Boston University league of legends team versus Oxford’s own team. Zz’rot won.
The second game I watched was Fnatic in the first day of week 5 of EU LCS, versus Elements. Zz’rot won.

I have now also been told that Zz’rot has also been spotted in LAS. Winning again.

So now that Zz’rot is out there, let’s discuss a couple things :
-Why is it strong?
-How should it be used?
-How do you counter it?
-Who can use Zz’rot the best?

Zz’rot Portal Statistics
First thing you want to consider is the raw stats of the item, and their raw value.
60 magic resistance is worth 1080 gold
60 armor is worth 1200 gold
125% base health regen is worth 375 gold
total worth of raw stats : 2655 gold
price : 2700 gold (yes, cheaper than banner of command)
So that’s a 98.33% efficiency on raw stats, without considering the point runner passive (20% ms when beside a tower or a portal) and the pushing power, the item already packs a punch!
But if you want to understand the true worth of the item, you need to think of it in a strategical kind of way.
What does Zz’rot do? It pushes a wave for 150 seconds, enemy minions CANNOT go farther than where you put the Zz’rot. What this allows is tower pushing, sieging, and simply permanently shoving a side lane, while NOT having a player there.
This is essentially a cheap and cost efficient way to re-create the CJ Entus Blaze strategy of the sixth man, exept this time, you even get the gold from the minions your voidlings slay. Yes, more efficient than the strategy that led to that crazy winstreak of 13 games in a row.

How should it be used?
Zz’rot can be used in different ways, it should be built on solo laners, because they have sufficient income to support it, preferably on toplaners, but it is also the best build on Galio in the midlane.

First way to use Zz’rot : defensive usage.
If the enemy composition is trying to siege down your turrets, put your Zz’rot behind your turret, and your voidlings will keep their minions at bay, allowing you to waveclear easily, and hold your position, essentially wasting your enemies time and impacting their income by having them sit against the steady tide of voidlings, 1 every 4 seconds.
If you are a toplaner that has a bad matchup, get a Zz’rot, the defensive stats will help you not die, the regen will keep you up in HP, and the portal/voidlings will keep your lane shoved.
In some matchups, you can go back and walk to your lane, Zz’rot will have done the waveclear duty for you.

Second way to use Zz’rot : splitpushing
You got yourself a Zz’rot, and you are trying to abuse it. To do so, put it at a position where it can threaten the towers of a lane that is far away from the objective your team is going for.
For example, your team wants to get top towers down, you are the toplaner and have TP.
You drop the Zz’rot on botlane, after having shoved it a little, and you go mid.
This is what the lane assignement looks like : 4/1/Zz
Now you have to be matched and enemies are in a lose/lose/lose situation
They 4/1/0 and you get bot turrets, or 4/0/1 and you get mid turrets.
They 3/1/1 and you can use this at your advantage to force a 5v4 in the toplane by using your TP.

Third way to use Zz’rot : using its low CD to get cracks in your opponent’s armor
This is the strategy that Fnatic used, very successfully, versus Elements.
Your team is baiting baron, and you have a Zz’rot shoving botlane, their toplaner has to deal with the flow of voidlings.
You start baron, they have to answer with TP. You disengage baron, and resume the same strategy, but this time, your opponent’s TP is on cooldown. Huho :/.
Either you get a 5v4 at baron, or turrets.

Fourth way to use Zz’rot : Sieging with Zz’rot
I find this to no be the optimal way to use Zz’rot, while the voidlings do significant damages to turrets and other structures, they are easily cleared by multiple opponents, and are better suited to create a number’s advantage for you and your team or smashing into undefended turrets.
If you are actually using it to siege, make sure that every fourth voidling does get through to explode on the turret, it can do hundreds of damages, scaling with your HP.

How do you counter it?
I have identified a couple ways Zz’rot can be beaten.
1- Identify the build path early, and build your very own Zz’rot. Yes, fight fire with fire.
2- React quickly enough with a hard engage on the Zz’rot composition before they have time to set up the 3 pronged shove and push for which you wont have an answer if it is set up with the right technique.
Be very wary when moving against a Zz’rot composition, because if you make a pro-active play that turns out to be a draw in terms of map pressure, you will actually be punished by the passively pushing Zz’rot. You have to be quick, decisive, and one mistake will put you far behind.

Commonly believed : Zz’rot does not work against AD type toplaners. Why is this statement wrong? Because it is confused with Banner’s active that makes a minion be untargetable by magic damage. Zz’rot is easily removed by a couple auto, but you can never get to the heart of the problem if used correctly, even if you are Fiora, you will still be facing a never ending swarn of zergl-voidlings.

The disgusting part about Zz’rot is that when played in the optimal way, even if you win a fight against the Zz’rot composition, you find yourself having to answer waves, and not being able to attack their structures. Remember, you win the game by destroying your enemies’ nexus, not killing their champions.
Did I mention that Zz’rot gives you the gold for the minions your voidlings kill?

Which champion are the best suited to exploit Zz’rot in competitive?
The toplane, land of the tanks, offers multiple champions that can successfully run the Zz’rot strategy.
Alphabeticaly, Cho’gath, Galio, Malphite, Maokai, Nautilus, Poppy, Rammus (couple KR challengers run Rammus with Zz’rot), Shen, Sion, and maybe Yorick(with a tear) can all run Zz’rot first item. Why? Because Zz’rot will help them shove, and make them super tanky!

In the midlane, there is one champion I want to give a quick shout out to : Galio.

He is often forgotten, and I have never seen Galio played in the “correct” way of the Zz’rot.
I myself stumbled upon this build about 10 days ago, while being lucky enough to randomly be placed in Trick2g’s team in a high elo dynamic queue game on EUW.
I picked Galio, a kind of “troll” champion, and wanted to buff up Trick2g’s Udyr with my W(which offers over 3k of defensive stats and a heal on yourself hello??) and speed him up with my E.
I decided to build Zz’rot first item because it synergies with Galio’s passive(50% of his MR is turned into AP) and the fact that Galio is a brawly champion that gets in the fray of battle. Zz’rot earns another 650 gold value on Galio as it gives him 30 ap.
What this item turns Galio into is a superb shover, strong tank and a stellar teamfighter, he isnt about his flash ult plays anymore, he is a strong peeler, that cannot die. He will be sitting by his carry, protect them from enemy dives with his Idol of Durand, still deal significant damages to enemy squishies, give 3k gold of defensive stats to his ADC or any champion he sees fit.
Galio will blow your mind.
Also, Galio is far from weak against AD comps, he will easily build a sunfire, a thornmail, this really isnt a problem versus AD based comps.
Does he die easily to a Zed? No, he will hold him in lane, and if Zed leaves, he will take his turret.
Can he hold 5 people in midlane for about 20 minutes for each turret? Yes.

Will you, just like me, embrace the Zz’rot way of life?
Will Galio be your valentine?
Tell me more about your adventureZzs at https://twitter.com/Mephisto_V