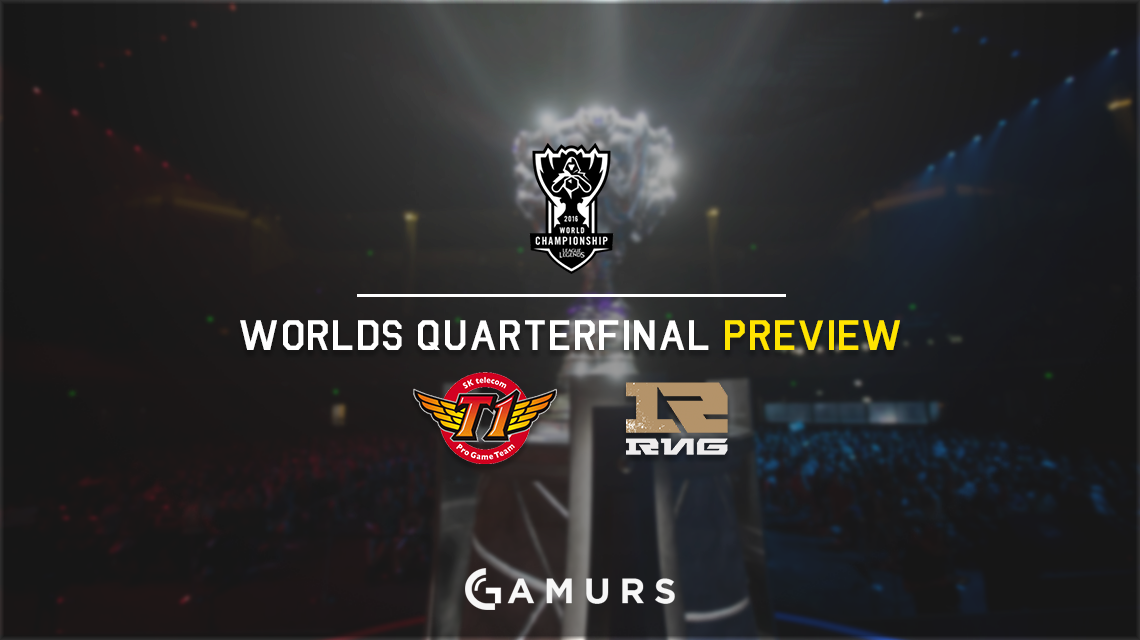 The second match of the quarterfinals of the 2016 Season League of Legends World Championship features the defending champions and an organization trying to live up to past glory.

Korea’s No. 2 seed, SK Telecom T1 destroyed Group B, only dropping on match to Flash Wolves, the “Korean killers,” en route to a 5-1 performance.

China’s No. 2 seed, Royal Never Give Up had a very shaky performance in the “Group of Death,” only going 3-3 and barely securing the quarterfinals bid by defeating Team SoloMid in the final match of the group.

Similar to the Samsung Galaxy vs. Cloud9 matchup, the Korean side appears to be the heavy favorite to win this series. But, hey, crazier things have happened in the past few weeks. On Friday, Oct. 14, SKT and RNG face off in a rematch of one of the 2016 Mid-Season Invitational semifinal matches.

The defending champions are back and ready to take home the Summoner’s Cup once again.

SKT may be Korea’s No. 2 seed, but we all know just how dominant Korean teams are. If you need a refresher, No. 3 seed Samsung Galaxy won the “Group of Death” and demolished North America’s best in the process. SKT knows how to win, and this team has likely been the most consistent favorite to win it all since the tournament started.

After winning last year’s Worlds, SKT returned to Korea with a target on its back. The team had a relatively poor Spring Split, and by relatively poor I only mean third-place in the regular season. This was mainly due to issues in the jungle, with Blank and Bengi splitting time until Week 8. With just a 5-4 record at the time, SKT was stunned. The team still received an invite to IEM Katowice, started Blank in every game, and destroyed the international competition. They then hit their stride, giving Blank the starting position and going 7-2 in the second half of the split to secure the No. 3 seed going into the playoffs. SKT’s dominance continued in the playoffs, only dropping two games throughout three series en route to winning it all over the ROX Tigers and securing a spot at MSI.

TL;DR, at MSI, SKT got off to another slow start and only finished No. 4 in the round robin stage. They then faced RNG, the No. 1 seed, in the semifinal and won the series handily 3-1. After that, sweeping North America’s Counter Logic Gaming in the finals of the tournament was no problem.

SKT’s Summer Split was more successful than their Spring Split in the regular season. The team finished 13-5 and walked into the playoffs with the No. 2 seed behind ROX. It seemed that we were destined to have another ROX versus SKT showdown in the finals, but KT Rolster had other plans as the squad took SKT out of the playoffs with a 3-2 victory. SKT still qualified for Worlds with the No. 2 seed based off of Championship Points, but question marks surrounded the team. Placed into Group B with Flash Wolves (LMS No. 1), I May (LPL No. 3) and Cloud9 (NA LCS No. 3), SKT looked to be in a relatively favorable position to advance into the quarterfinals, as many analysts still saw the squad as a top contender to win it all.

In the group, SKT proved to the world that they were still a championship contender. Week one saw SKT stomp Cloud9 mercilessly into the ground, dominate I May and get upset by Flash Wolves, at this point dubbed the “Korean Killers.” SKT got revenge in week two, sweeping the field to end group play 5-1 and take the No. 1 seed going into the quarterfinal draw.

SKT still has unanswered questions, as Bengi and Blank still rotate in the jungle. The team’s strategy noticeably changes between junglers, but the squad still doesn’t obviously struggle. Bengi has been named the starting jungler for the quarterfinal series against RNG, but don’t be surprised if Blank sees playing time. The team’s duo lane has been less impressive than expected, though still very strong. Surprising to no one, Faker has been this team’s star yet again. The mid laner is still the best in the world, and he refuses to lose.

If SKT play like they did in the group stage and RNG is as inconsistent as they were in the group stage, this is SKT’s game to lose. The defending champs have everything they need to make it back to the finals, or at least past this quarterfinal match.

Royal Never Give Up is here for MSI revenge.

To understand how incredible the RNG storyline is, we have to go all the way back to the 2015 Summer Split. RNG went 3-12-7, and were forced to fight in the relegation tournament to even stay in the LPL for the 2016 Spring Split. This team really never gives up. After a few roster changes and a change to the coaching staff, RNG went 13-3 in the 2016 Spring Split and qualified for the playoffs as the No. 1 seed from Group B. Once there, RNG advanced all the way to the finals and dethroned EDward Gaming in a 3-1 victory. In one split, RNG went from fighting in the promotion tournament to winning the league. Ready to represent China on home turf at MSI, RNG was in for a fight.

The squad managed to get first in the round robin stage, looking very solid against the best teams in the world. Hopes were high going into the playoffs, but a resurgent SKT stood in their way in the semifinals. RNG was knocked aside by the Korean team, losing 3-1 and exiting the tournament. Days after their exit from the tournament (the same day the finals took place), RNG announced a roster change. Wang “wuxx” Cheng would no longer be the starting ADC, as Uzi stepped in to take his place.

In the Summer Split, RNG once again went 13-3 and topped Group B heading into the playoffs. This time, EDG was ready in the finals. After an undefeated split for EDG, this was supposed to be one of the best regional finals in history. It was supposed to be a true test of who was the best team in China.

RNG was swept 3-0 and had to take the No. 2 seed going into Worlds.

The team was then drawn into the “Group of Death” alongside Team SoloMid (NA LCS No. 1), Samsung Galaxy (LCK No. 3) and Splyce (EU LCS No. 3). Most analysts argued whether or not RNG was good enough to escape the group, as TSM and SSG were thought to be the obviously stronger teams. In a strange group stage, RNG came out over TSM with the second-seed.

RNG started off the group with a statement win over TSM, followed by thrashing Splyce and getting thrashed by SSG. The team never looked particularly good, though, even in their wins. Still, week two was supposed to bring adaptation and stronger play.

In week two, RNG looked even worse. The squad was absolutely manhandled by Splyce and SSG before pulling out a crucial win over TSM to secure the second-seed. It was ugly, but they did it. Still, this team has a lot to work on if they want to be able to take down the likes of SKT.

For starters, RNG still has insanely bad macro play most of the time. The team’s overall goals and objective play are awful, and Splyce and SSG took perfect advantage of that. TSM seemed lost beyond all hope, not knowing how to play against Aurelion Sol and allowing xiaohu to roam across the map, feeding other lanes. But that’s another story. RNG seems to have a very basic win condition: feed Uzi. It’s pretty easy to take advantage of this, especially for a team with a strong duo lane like SKT.

The odds that RNG wins this game are slim, but we’ve seen plenty stranger things happen in this tournament.

If you’re looking for the Samsung Galaxy vs. Cloud9 preview, click here. SK Telecom T1 vs. Royal Never Give Up is next, followed by ROX Tigers vs. EDward Gaming and H2k-Gaming vs Albus NoX Luna.