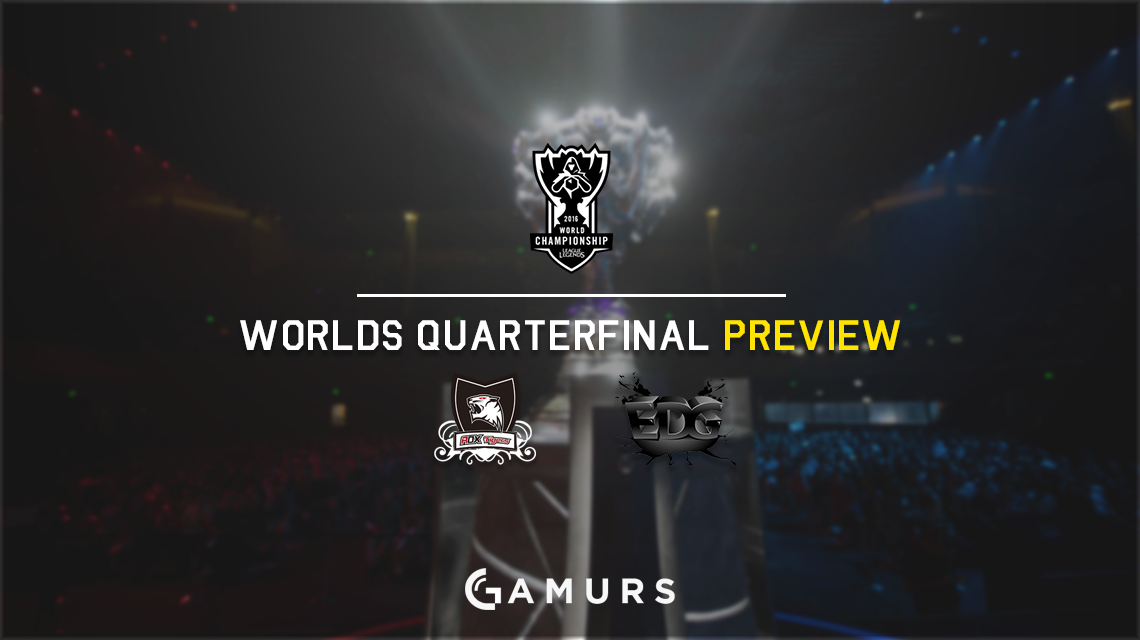 The third quarterfinal match of the 2016 Season League of Legends World Championship features two team that were favorites to win it all in the days leading up to the tournament.

The ROX Tigers are coming off of a historic split, finally winning the Summer Split in the LCK and securing the No. 1 Korean seed going into Worlds, but things have not gone exactly according to plan.

EDward Gaming is also coming off of a historic split, going undefeated in the regular season of the LPL and sweeping Royal Never Give Up in the playoffs to claim China’s No. 1 seed going into Worlds. Like ROX, however, the tournament has not been particularly impressive for this squad.

The favorite here is likely ROX, but this could easily be the most competitive series in the entire quarterfinals. Both teams are underperforming, but we know just how powerful they can be. Whoever returns to form, takes the win. On Saturday, Oct. 15, Korea and China’s top teams duke it out in the quarterfinals.

The ROX Tigers are here for two reasons: win it all, and beat SK Telecom T1.

Going into this tournament as Korea’s champions, finally stepping out of SKT’s shadow, the Tigers were the favorite to win it all. So far, even though the team took first in their group, the players have looked like a shadow of their former selves.

Let’s jump all the way back to the 2015 Spring Split. ROX (then known as the GE Tigers) dominated the LCK, going 12-2 after only dropping matches to KT Rolster and SKT, and taking the top seed going into the playoffs. Who met them in the finals? SKT, resoundingly beating the Tigers 3-0. Now, the 2015 Summer Split. ROX (then known as the KOO Tigers) took the No. 4 seed going into the playoffs with a record of 11-7. The Tigers fell to KT Rolster 3-2, finishing the split in third place and taking Korea’s No. 2 seed going into Worlds. At Worlds, the Tigers took second in their group, ran through the playoffs and met SKT in the finals. In a rather anticlimactic ending, SKT beat the Tigers 3-1 relatively easily and won the championship.

In the 2016 Spring Split, ROX (now actually known as ROX) dominated the LCK once again, going 16-2 and taking the No. 1 seed into the playoffs. Who met them in the finals yet again? SKT, who once again smashed the Tigers 3-1. In the Summer Split, ROX went 15-3 and took the No. 1 into the playoffs again, but both losses were 2-0 to SKT. It was finally time for revenge, as the Tigers planned to face SKT in the finals and finally beat their biggest rivals. KT Rolster, however, beat SKT before they could advance that far. ROX proceeded to beat KT 3-2 in the finals, securing Korea’s No. 1 seed going into Worlds.

All of this was really just to say, ROX still hasn’t overcome SKT, and these Tigers are out for blood.

In the group stage, ROX played uncharacteristically sloppy, dropping a game to both Counter Logic Gaming (NA LCS No. 2) and Albus NoX Luna (IWC – LCL No. 1). Because of this, their 4-2 record forced a tiebreaker game with ANX to secure the first seed from the group. ROX won handily. It cannot be stated enough, though, that this team is not currently playing at its full potential. CLG and ANX punished them, and so can any of the teams left in this tournament. This squad has some issues to work on, but they are still one of the four best teams in the world and should be able to advance to the semifinals.

Smeb, the superstar top laner considered to the best player in the world right now, has not looked like himself. We know he was sick during some, if not all, games, so hopefully he will be back at full force for the bracket stage. In the meantime, Peanut, PraY and GorillA have shown up when needed, and Kuro has been a consistent threat. Even with the problems this team showed, especially in the early-game, ROX should advance.

After China failed to meet expectations at Worlds last year, EDG is here to try it again. So far, it’s not going well.

China was hyped up last year, and fans expected LGD Gaming, the region’s top team, to take home the Summoner’s Cup and keep it out of Korean hands. LGD failed to make it out of the group stage, as did Invictus Gaming. EDG, the region’s No. 2 seed at the time, advanced out of groups only to be swept by Fnatic in the quarterfinals.

Going into the 2016 Spring Split, EDG needed to make some changes. Koro1 took over for Shek “AmazingJ” Wai Ho in the top lane, while PawN was forced to take a backseat at several points in the season due to health issues, which moved Kang “Athena” Ha-woon into the mid lane. The team had a shaky start, but ended the regular season with a 12-4 record, going into the playoffs with the No. 2 seed from Group B behind Royal Never Give Up. Once there, EDG swept Snake eSports and walked into the finals after the Qiao Gu Reapers forfeited the semifinal series. EDG faltered in the finals, dropping 3-1 to RNG and ending the split in second place.

Changes were necessary once again heading into the Summer Split, as Mouse took over the top lane from Koro1. PawN was forced to step down indefinitely, and Scout stepped in for the season to take his spot in the mid lane. Scout was the prodigy who backed up Lee “Faker” Sang-hyeok and Lee “Easyhoon” Ji-hoon during SK Telecom T1’s championship run in 2015, and he was untested as a starter. Still, the young gun was ready to make a name for himself on one of the world’s best teams. EDG had a top laner that they trusted, and a mid laner that would be available all split. No more inconsistency or synergy issues. This was EDG’s split.

The star-studded lineup wasted no time, demolishing the LPL competition en route to a perfect 16-0 regular season. EDG didn’t slow down in the playoffs, though they did hit a slight snag against Team WE in the semifinals, barely winning 3-2. In the finals against RNG, however, EDG was on another level. The team completely defeated RNG, on both a micro and macro level, winning the finals 3-0 in absolutely dominant fashion to take China’s No. 1 seed going into Worlds.

Expectations for China as a whole have been relatively controlled this year, but EDG has been mentioned for some time since the end of the Summer Split as a potential contender to win it all. Going into the group stage, the squad was put in what has been referred to as the “Group of Life with EDG on top.” H2k-Gaming (EU LCS No. 2), ahq e-Sports Club (LMS No. 2) and INTZ e-Sports (IWC – CBLoL No. 1) were considered to be no threat at all to EDG, and the Chinese squad was expected to sweep the competition. Obviously, that wasn’t the case. In groups, EDG was upset in the first game by INTZ. This was a huge shock across the world, as a wildcard team pulling off an upset of this magnitude was practically unheard of. EDG recovered, taking down ahq and H2k to end the first week of play. In week two, EDG started off the week with a revenge thrashing of INTZ. Then, disaster struck as H2k took down the giants. EDG recovered by beating ahq once again, but a tiebreaker match was needed against H2k to decide which squad received the top seed going into the quarterfinals. Once again, H2k beat EDG.

One of EDG’s problems in the group stage was top laner Mouse, as his skill level was far below that of the rest of his team. He was constantly behind, losing in lane and not impacting the game enough outside of the laning phase. He is not the only problem, of course, because one man cannot bring down an entire team. Well, unless that man is H2k’s Konstantinos “FORG1VEN” Tzortziou. The H2k ADC demolished everyone on the final day of play, including EDG and Deft. However, EDG faces an entirely new problem in the quarterfinals, as Mouse has returned home for the remainder of Worlds due to a death in his family. In his place, Koro1 will return to the top lane.

The squad is also very indecisive in the mid lane, swapping between PawN and Scout repeatedly. PawN has been given the starting nod for the upcoming quarterfinal match against ROX. Synergy and comfortability are huge parts of competitive League of Legends, and those things are hard to achieve with a rotating mid lane and an emergency sub in the top lane.

EDG has looked good, and bad, and somewhere in the middle. It all depends on which team we see show up to face the Tigers. If Koro1 can make it out of laning phase against the best top laner in the world without losing by too much, PawN and Deft can win their lanes and EDG can find synergy with their sub in the top lane, EDG just might have a shot.

This could easily be the closest matchup in all of the quarterfinals, so get your popcorn ready.

If you missed the previews for the other quarterfinal matches, you can find Samsung vs. Cloud9 here and SK Telecom T1 vs. Royal Never Give Up here. H2k-gaming vs. Albus NoX Luna will be coming next.