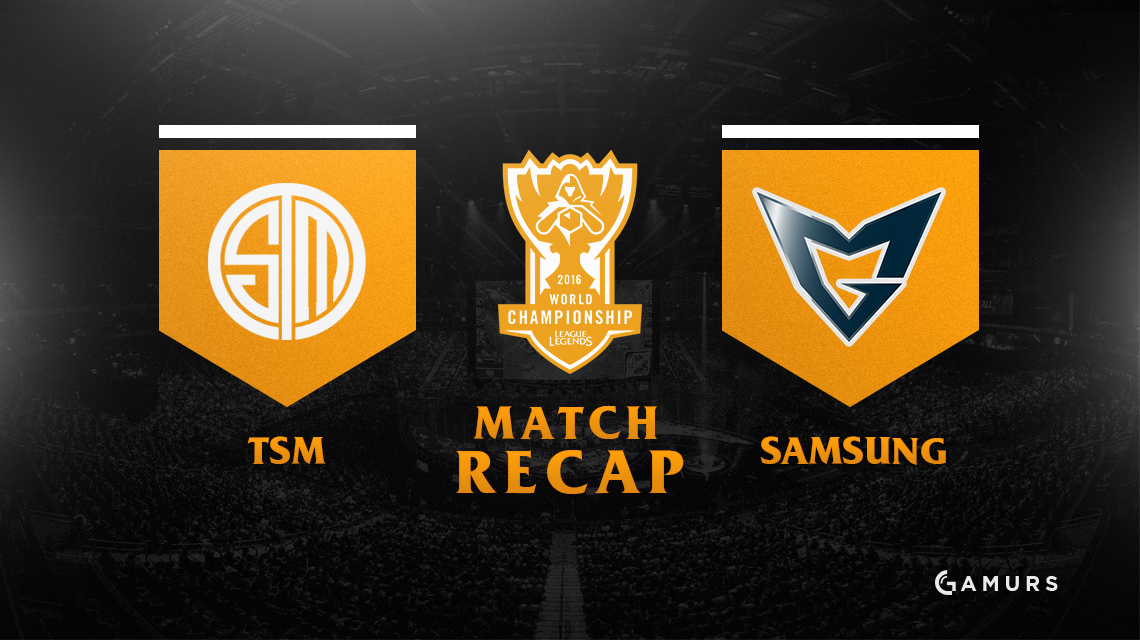 The ninth game of the League of Legends World Championship just concluded. The game saw NA’s Team SoloMid play against the LCK’s own, Samsung Galaxy.

The strategy TSM was going for was a huge CC comp to lock down key SSG opponents, while SSG had a very strong poke comp that could pick enemy members really well.

Heading onto the rift, the game looked very tame. Poking from each lane left almost everyone around half HP. Svenskeren pushed into Ambition’s jungle and attempted to take blue buff. Despite him failing the steal, he forced exhaust from Wraith. Ambition wanting revenge, pushed into Svenskeren’s top jungle to catch him out at his gromp, but got too greedy, resulting in a 2-0 score in favor of TSM.

Not long after, Bjergsen solo-killed Crown mid lane through his cleanse, bringing TSM further ahead. However, they didn’t stop there, as Bjergsen and Svenskeren roamed top and secured a second kill for Bjerg against CuVee.

Then, everyone on TSM grouped together around dragon pit. SSG thought they could catch out Svenskeren, but Biofrost came to the rescue and blocked nearly every ability of SSG, resulting in another kill for TSM. At this point, TSM had just been dominating SSG in every aspect.

Moving towards bot lane, TSM engaged in a 5v5 fight under SSG’s tower and secured a kill on Ruler under tower and caught Crown trying to flank through the jungle, increasing the kill lead to 8-1. SSG now resorted to sneaking jungle camps in fear of dying to TSM’s catch potential.

TSM was now 9k gold ahead with vision control of SSG’s jungle and most of their lanes, allowing them free reign to position wherever they chose, while SSG had to respect them. Time after time, SSG narrowly escaped death in their own jungle, being forced to pop summoners and abilities every time. SSG couldn’t even contest TSM at any objectives, leaving TSM to keep growing their lead.

With a CS and item advantage in every lane, TSM looked poised to continue crushing SSG. Now with three drakes (one Mountain and two Infernal), TSM looked to pull a Fnatic bush trick, but SSG didn’t fall for it.

With SSG having to defend lanes, TSM made a push towards Baron. SSG came to clear TSM out, but TSM quickly turned on them and got a double kill after a clean combo by Svenskeren and Hauntzer. After TSM secured the inhibitor, they backed, which allowed SSG to take their second tower, closing the gold lead just a little bit. Unfortunately for them, TSM was still ahead nearly 12k gold.

SSG thought they had a clear advantage and tried to take a fight on TSM, but they were over their heads and TSM put them in the dirt. Not long after, TSM took fight after fight straight into SSG’s base. SSG were systematically shut down over and over and TSM ended the game 18-1.

What has been your favorite moment from Worlds thus far? Let us know by commenting below or tweeting us @GAMURScom.