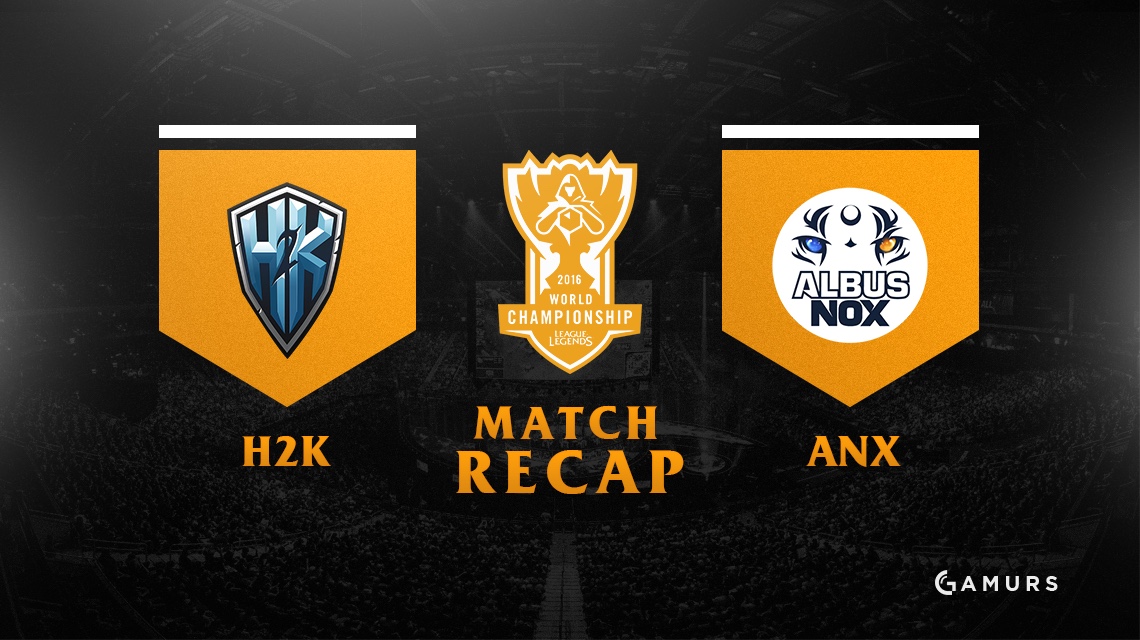 Today, H2k-Gaming (EU LCS) faced off against Albus NoX Luna (LCL) in the fourth and final quarterfinals matchup for Worlds 2016. Here is a complete game-by-game breakdown of this series:

The game began like most, with no surprise plays. H2k had the initial push in the bottom lane and damaged the turret first, but the real action kicked off in a 2v2 in the top lane. Marcin “Jankos” Jankowski face-checked the top lane tri-brush and was caught off guard by the enemy Olaf, who threw down most of the early damage. However, Andrei “Odoamne” Pascu was there to back up Jankos and found a kill on the Olaf. Dmitri “Smurf” Ivanov entered the fight late and was stuck without any backup as he died to Odoamne, giving his laning opponent his second kill of the game.

From this early advantage, H2k was in firm control of the game, securing the first tower and five kills by the 15-minute mark. The only objective ANX was able to secure was the first dragon of the game, the Ocean Drake.

Twenty minutes in, ANX wanted to pick off Odoamne, who had pushed a little too far, and they did, securing their first kill of the game. From this, ANX looked to secure a dragon. ANX began taking the objective, but the Infernal Dragon was stolen by Jankos and secured for H2k, putting their gold lead at about 8k.

Two fights later, both of which were won by H2k, the last European League Championship Series team at Worlds sat in firm position for a win with two ANX inhibitors down and another Infernal Drake. H2k looked for the Baron to put the final nail in the coffin, but it was stolen by ANX, keeping them alive for just a few more minutes before H2k went on to secure game one of the series.

In game one, the action started in the top lane, but in game two, it all kicked off in the bottom lane. The junglers and mid laners roamed in, and both top laners came down. H2k won the extended team fight and found four kills on Albus NoX, with, like in game one, Odoamne leading the charge. H2k also found the first two dragons of the game (an infernal, and a cloud) and the first and only three fallen turrets of the game by 18 minutes. They also held onto a 9-1 kill lead and a 10k gold lead.

H2k took Baron at just past 20 minutes and got it without contention from ANX. They then looked to use the buff to apply pressure down the mid lane, which they did, taking down the tier two turret.

Meanwhile, Odoamne split pushed down bot lane and was then helped by his team to take down the inhib. A team fight ensued, which H2k won by taking down all members of ANX. From there, H2k melted down the nexus turrets and took game two to set a Worlds 2016 record for fastest game at just past 23 minutes.

Game one saw first blood happen in the top lane, game two saw it in the bot lane, and game three saw it in the mid lane. Yoo “Ryu” Sang-ook found himself an unassisted kill onto Mykhailo “Kira” Harmash to start the game, flashing past the mid lane tier one to secure the kill and popping a potion to survive the subsequent turret and minion aggro. This first blood was followed up by another kill by Ryu onto his lane opponent, putting Ryu in firm position to control the mid lane.

While H2k had the early advantage, ANX was able to prevent the snowball that had happened in games one and two, finding a cloud drake, the Rift Herald, and a tower here and there. ANX was “picking up the scraps,” as described by the casters. Despite this, H2k still controlled the gold lead, but it was not as large as it was in previous games.

As the game progressed, however, ANX was determined to show that they were not going to be the team that would just roll over and die. They delayed a Baron by H2k and were able to take the bottom lane inhibitor and find a few kills.

However, H2k was keen to put ANX in their place and secure their spot in the semifinals. It took just one more team fight in the bottom lane that H2k won and rode a wave of Baron buffed minions right into the ANX base to take down their Nexus for the final time.

What were your thoughts on this match? Let us know by commenting below or tweeting us @GAMURScom.