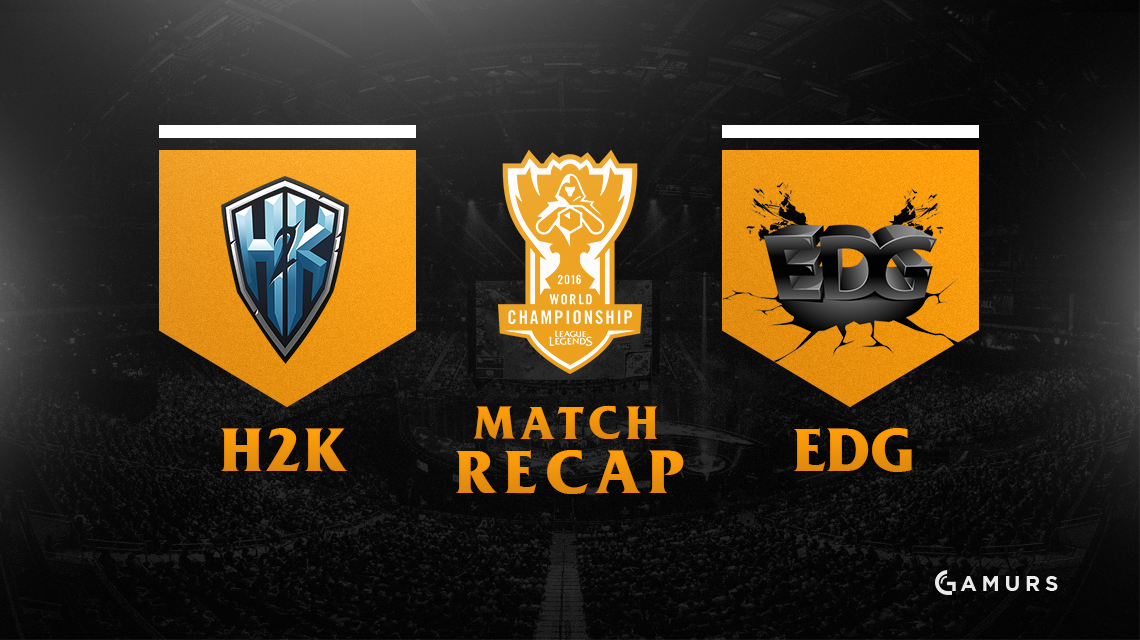 Just a few moments later, Andrei “Odoamne” Pascu earned his first kill of the game up in the top lane for H2K, while Ryu picked up another kill mid, giving H2K the 3-1 advantage in kills.

Around the 17-minute mark, H2K had two tier one turrets to their name compared to EDG’s one. At the same time, H2K was seemingly winning in every lane, until EDG’s jungler Ming “ClearLove” Kai picked up a double kill in the mid lane, evening the kill count at three apiece.

Just a few minutes later, EDG took advantage of an open mid lane to secure the tier one mid turret, but H2K still held a 4-2 lead in turrets, as well as roughly a 3k gold lead.

At the 25-minute mark, H2K rushed a Baron attempt and just narrowly killed the beast before EDG could react. Using their Baron buff, H2K secured EDG’s tier two bottom turret and a Cloud Drake, pushing their gold lead to roughly 6k at 28 minutes.

Over the next several minutes, both teams seemed to be stalling, waiting for the next Baron to spawn onto the rift. However, H2K was able to secure their second Infernal Drake at the 34-minute mark, keeping their gold lead at 6k.

A fight broke out in EDG’s top-side jungle in which H2K took a two-for-one advantage, killing ClearLove and taking a free Baron afterwards, accruing a massive 11k gold lead. H2K seemed like they would easily take the game, as their team fight composition was superior to EDG’s and they had absolute control of objectives.

At around 40 minutes, the teams started gaining vision around the Elder Drake soon to spawn. EDG started Elder Drake, but Marcin “Jankos” Jankowski stole it, and everything went wrong for EDG as they lost the final fight of the game, largely due to Konstantinos-Napoleon “FORG1VEN” Tzortziou’s Caitlyn performance. H2K rushed to the top lane, where they easily completed the ace and destroyed the EDG Nexus at 45 minutes.

H2K is on a roll now after winning back-to-back games today and improving to 3-2, while EDward Gaming falls to 3-2. The rest of the games tonight will decide who will make it through to the quarterfinals out of Group C.

What has been your favorite moment from today’s action at Worlds? Let us know by commenting below or tweeting us @GAMURScom.