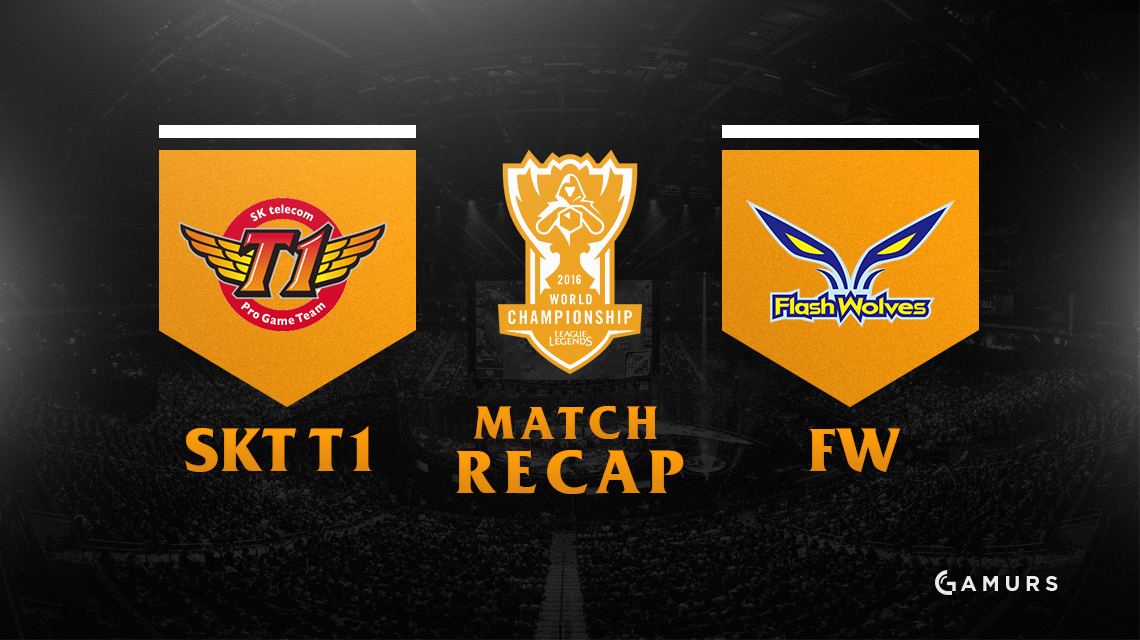 After a strong showing from Huhi on Aurelion Sol, it was no surprise that we would see him again. Korea’s own SKT T1 faced off against Maple on Aurelion Sol with his team, the Flash Wolves.

The beginning of the game was very standard. Everyone kept to themselves and farmed to take a gold lead. Faker attempted to solo kill Maple, but a strong outplay with Karsa nearby resulted in first blood against Faker. After resetting back into standard lanes, everything seemed to look normal until Karsa flashed behind Faker to get another kill for FW. SKT tried to react and dove bottom lane for a kill, but Karsa met Blank as he was retreating for a free kill. To the surprise of SKT, Karsa didn’t stop there. When Bang thought everything was safe to walk back into lane, Karsa came from over the wall for yet another kill to Karsa’s name. Now 4/0, Karsa started to make a name for his Lee Sin. Despite the score being 1-5, FW only have a 600 gold lead.

Now, with both teams rotating to each lane to maximize gold income, the game boiled down to who rotated better. There were a few skirmishes here and there, but nothing worth an ult or summoner from anyone. With everyone on full summoners and abilities, and the gold only at a 1k difference, both teams played slow and waited for the other to make a mistake. To SKT’s favour, they managed to get two dragons (1x Ocean 1x Cloud.)

Late Game: One Pick Means Lead For Flash Wolves
Faker was seen farming top lane by a ward, so Maple met MMD to sandwich Faker. As an added bonus, Wolf was nearby and gave FW another target. After both were killed, FW made a move for Baron. Despite a valiant effort from SKT to force them off of it, FW secured the Baron and escaped with little HP. Again and again, FW found pick after pick on stray SKT members. One pick too many allowed FW to get a second Baron and open up SKT’s base. As MMD solo pushed top, SKT thought they found an easy pick. As they sent four people top lane, however, FW took the opportunity to siege the inhibitor. As a last ditch effort, SKT tried to fight FW after FW secured Elder Dragon, but they lost. With three members down, FW cruised into SKT’s base to give SKT their first loss of this worlds.