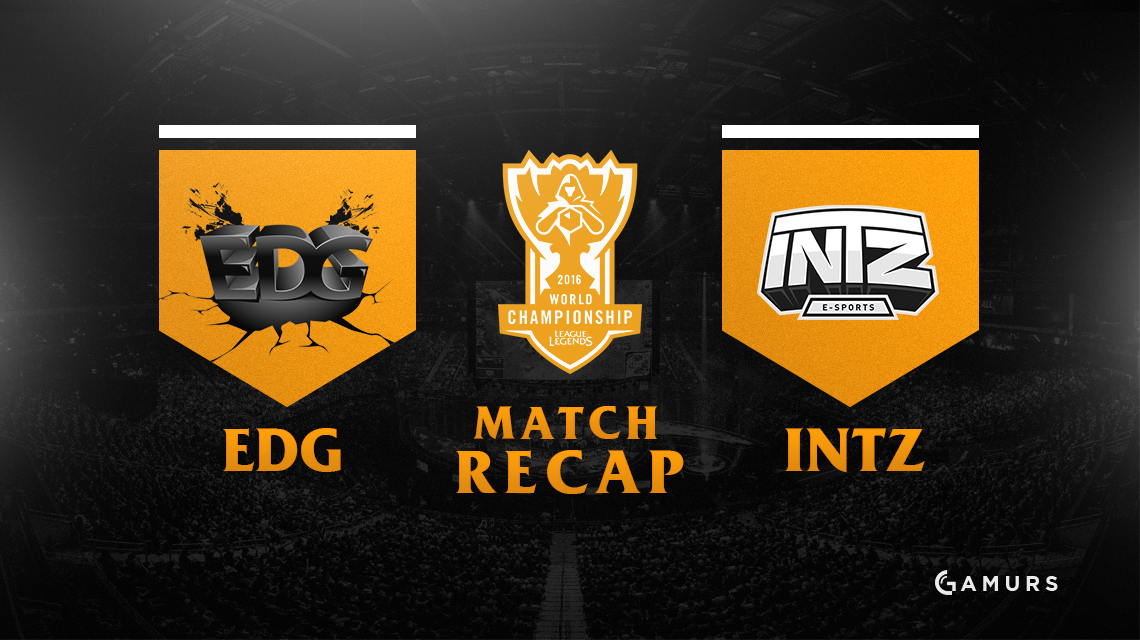 A recap of the match from day five of Worlds 2016 between EDward Gaming of the LPL and INTZ e-Sports of the CB LOL.

ITZ looked to make it two-for-two in their matchups against EDG, knowing a win here would open up their chances to join Albus NoX Luna into the last-eight.

EDG looked like they learned their lesson by finding the first blood from a bottom lane push set-up, giving EDG a 1k gold lead in the early game. EDG dominated the bottom lane and secured the first tower before the seven-minute mark and gave themselves nearly a 3k gold lead.

After a successful four-man gank on top lane, EDG continued to push their lead and increase their vision coverage on the map. EDG was able to secure all three outer turrets and the first dragon by the 16-minute mark, completely dominating the game.

ITZ did secure themselves a tower, but at the cost of another kill for EDG after a top lane engage from the team. However, the game progressed to give ITZ a small glimmer of hope with a kill and a tower secured in the top lane.

EDG was quick to pounce on a Caitlyn open in the jungle, securing the kill and the second top tower in the process. This would pave the way for EDG to push their gold lead forward slightly before it became more stable between the two teams.

A team fight in the mid lane resulted in a four-for-two in EDG’s favour, resulting in another dragon for EDG, their fourth of the game, giving EDG a 7k gold lead up until this point.

EDG played around Baron to set up a small bait maneuver to take three kills from ITZ, securing the Baron and then earning another kill from ITZ after an unsuccessful Baron steal attempt.

EDG then capitalised on ITZ mistakes throughout the match to take total control of the game until they pushed ITZ back into their base and took the win, redeeming themselves and making ITZ’s climb an even steeper slope to progress to the last-eight.